Candy Chang: Before I die I want to... 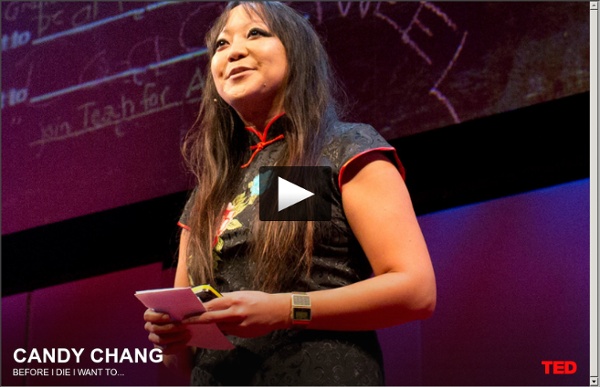 En Belgique, une ville abandonnée devient une toile gigantesque dédiée au street art La Belgique abrite un curieux village abandonné au street art. Un photographe a plongé au coeur de cette sublime toile géante à ciel ouvert pour artistes de rue. Nous vous faisons découvrir cette ville fantôme absolument incroyable à travers ses clichés. The 10 Best TED Talks of 2011 Watching videos online is usually considered fun, but generally a waste of time. Not so with TED videos, which are uniformly interesting, educational, inspiring, and enjoyable. If you haven't spent much time (or any) checking out TED videos, you should – and to help with that, I've compiled what seem to be the very best 10 TED videos of 2011. It was a grueling task, combing through the cream of the crop on the TED site, but somebody had to do it. Some of the talks may have been filmed prior to 2011 but all of the talks here were posted in 2011.

21 Balançoires : DAILY TOUS LES JOURS Upcoming Events McLaren Mur à Mur Commemoration of the 100th anniversary of Norman McLaren's birth April 11th to June 1st, Montreal Festival for Art, Interaction and InformationJune 10-13, Minneapolis Nuit Blanche Stats Before I Die What matters most to you Interactive public art project that invites people to share their personal aspirations in public. After losing someone she loved and falling into depression, Chang created this experiment on an abandoned house in her neighborhood to create an anonymous place to help restore perspective and share intimately with her neighbors. The project gained global attention and thanks to passionate people around the world, over 1000 Before I Die walls have now been created in over 70 countries, including Kazakhstan, Iraq, Haiti, China, Ukraine, Portugal, Japan, Denmark, Argentina, and South Africa. The walls are an honest mess of the longing, pain, joy, insecurity, gratitude, fear, and wonder you find in every community, and they reimagine public spaces that nurture honesty, vulnerability, trust and understanding. The Before I Die book is a celebration of these walls and the stories behind them.

20 awesome examples of street art If you still need a proof that art can be found anywhere, those awesome examples of great street art should convince you. Street Art Utopia's Best of 2011 I couldn’t help but direct everyone to fellow public art loving blog Street Art Utopia as they have compiled a pretty decent list of the best street art of 2011. If you are just getting into the wonderful world of pasting, spraying or making the streets a more creative place, this list is a great place to start (short of Wall and Piece). One of the best things about this genre is it’s diversity – you can decided what you find gimmicky/twee or meaningful and awe-inspiring. Street art has always been the public’s voice, and the art world has yielded success to those with great ideas and a call for change. More from the list after the jump!

We declare the world as our canvas More info. More info. More Banksy on Street Art Utopia. More info. Deliciously Bizarre Cartoons Turn Puppies Into Bros, Frogs Into Nerds Here's an illustrator you and your awesome third grade neighbor can both appreciate. Andrew Ho's colorful portrayals of the animal kingdom combine a youthful sense of imagination with cultural cues for the older set. If Henri Matisse and Mickalene Thomas teamed up to create an NSFW children's book-- hey, it could happen-- we imagine it would look something like this. In an email to the Huffington Post, the California artist described his works as autobiographical, or more specifically, as "a journal that records my experience."

Van Gogh’s Paintings Brought To Life With Animation 5K views 251 days ago by luca.agnani I decided to bring Van Gogh’s paintings to life by animating the shadows and giving some movement to the objects. I used 3D Studio Max and spent from 24 to 48 hours on each painting.