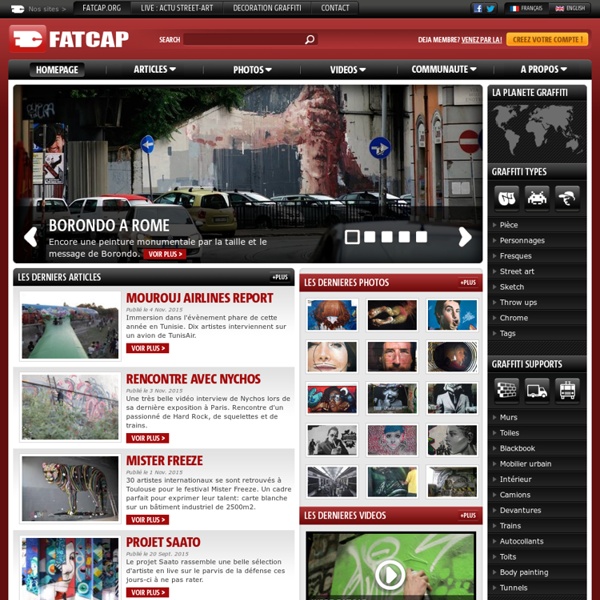 Symptoms Of An Epidemic: Web Design Trends Advertisement Today, too many websites are still inaccessible. In our new book Inclusive Design Patterns, we explore how to craft flexible front-end design patterns and make future-proof and accessible interfaces without extra effort. Hardcover, 312 pages. Get the book now! Street Artist Ludo Merges Technology and Nature to Create a New Order of Hybrid Organisms Paris-based artist Ludo (previously) has been active lately with works popping up all over France. His trademark monochromatic paste-ups with dripping green highlights often merge technology with plants or insects to create what he calls a “new order of hybrid organisms”. To see more of his work you can always stop by StreetArtNews or follow the artist’s blog.

Tattoo Inspiration: SirLexi Rex Posted on January 5, 2014 by lenny . SirLexi Rex is a tattooer based in Olympia, WA. UbuWeb Film & Video The following films are presented for educational and non-commercial use only. All copyrights belong to the artists. About UbuWeb Film & Video UbuWeb is pleased to present thousands of avant-garde films & videos for your viewing pleasure. However, it is important to us that you realize that what you will see is in no way comparable to the experience of seeing these gems as they were intended to be seen: in a dark room, on a large screen, with a good sound system and, most importantly, with a roomful of warm, like-minded bodies. However, we realize that the real thing isn't very easy to get to.

We declare the world as our canvas More info. More info. More Banksy on Street Art Utopia. 10 Minimal Website Design and Ideas Some websites opt to have a complex look with lots of graphics and text. It does look attractive and are also effective. But some designers and website owners would choose to have a simple website. They are thinking that in this manner they could deliver information more effectively. Dran – art pack 1 Keep in touch close Dran – art pack 1 Author: arsek July 14, 2010 the soup Source – LINK 7 Comments Giger Bodysuit Tattoo Project Since everyone seemed to like the last Giger sleeve I posted, I wanted to add Bosko’s biomech bodysuit, largely inspired by Giger pieces — he’s 49, and the fomer CEO of a top firm in Serbia. The tattoos were done over two and a half years by Boban at Bomba Tattoo in Novi Sad, Serbia. The tattoos were done with Talens India Ink instead of regular tattoo ink because Bosko developed an allergy, which eliminated their ability to do standard graywash shading in the piece. Full photos continue after the break. On his back is a large Giger baby with machine gun arms based on an exhibition photo, on his right side is Giger’s Samurai painting, and a biomech girl on the right, and his belling is based on Giger’s Landscape XVIII.

25 Beautiful Flyer Design Inspirations As you may know flyers are the key to any public event. Of course now with the use of social media like Facebook and Twitter its easier than ever to spread awereness for an upcoming local event. However flyer are not dead yet, and are still heavily used around the world for promotion. Some businesses just don’t see the valuable use in social media and continue to do thing the traditional way. For example, church flyers are on old fashioned way to invite religious people to an event, and will probably be that way for years to come. 100 of the Best Street Art Photos for 2013 December 13, 2013 in Art, Painting, Street art As 2013 comes to a close, we’ve scoured the world to find the best street art created over the last couple of years. With so many great works produced during this time it was a tough job, but we needed to stop somewhere!

Yin Yang, Phoenix, Dragon, Chinese Symbol Tatto There's more to Chinese tattoos than just the symbol tattoos, although tattoos have quite a negative connotation in traditional Chinese culture. In fact, there was a belief that the body is a sacred gift from one’s parents and should not be altered in any permanent way – which of course includes tattooing. Related Designs: 20 awesome examples of street art If you still need a proof that art can be found anywhere, those awesome examples of great street art should convince you.