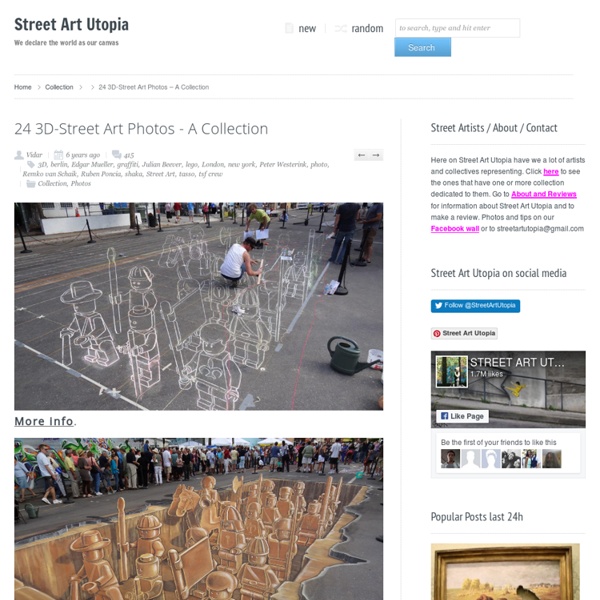 Like this post on Facebook: Like Street Art Utopia on Facebook: Followers, artists and photographers have for years been asking us if we're going to print a book. The last two years, our response have been that we will do it when we have 1 million followers on Facebook: We are ready We have close to 5 years of daily charing of street art and contact with artists and photographers. This book has all the potential to become a classic. Time to order your book To do the book as big, thick and colorful as possible we ask for prepaid orders! You can make your order for a book here (shipping included):

Os Gémeos: Don't Believe The Hype (San Diego, US) Os Gémeos, Don't Believe The Hype, San Diego Os Gémeos are in San Diego for MCASD's 'Viva la Revolucion' show, which opens this Saturday (7/17). See more by Os Gémeos. 106 of the most beloved Street Art Photos – Year 2010 More info. More info. More Banksy on Street Art Utopia. More info. More 3D on Street Art Utopia. More of this on streetartutopia.com. Sarcastic Street Art Art & Design Mobstr is a street artist who criticizes and plays with the idea of street art. His works are quite clever and funny. Malarky x VNA Magazine Hookedblog regular Malarky continues to dominate the East London landscape with the addition of this new shutter above near Petticoat Lane market. The artist is set to feature in the upcoming issue of Very Nearly Almost magazine which is due for release in early December. The team at the magazine caught up with Malarky in this short video interview as he painted the featured shutter.

Mind blowing 3D Street Paintings 3D Street Art paintings have been around since the sixteenth century when Italian Renaissance Madonnari and French trompe l’oeil (French for ‘deceive the eye’) painters created stunning murals to decorate the interior walls of luxurious villas. 3d art can also trace it’s routes further back to ancient Greek days when painter Zeuxius (born around 464BC) painted a still life painting so convincing that birds flew down from the sky to peck at the painted grapes. The Master of street painting uses the street as a canvas. Here are some new images that will make you wonder how is it possible for something be so realistic?! 1. Beautiful Lady With The Big Cat 2.

La Pandilla New Mural In Progress, Miami Your Ultimate Street Art News Site La Pandilla is a Puerto Rican based duo, they are currently in Miami painting this new mural in the Wynwood Art Districts for Art Basel 2011. With amazing technical skills these two are up and coming, so keep 'em on your radar and check back with us soon for the completed piece. Phlegm's work in Bantry, west Cork. Ireland In a lucky window of fine weather i got to paint in a very beautiful part of Ireland last week. I was made to feel so at home there i had a hard time making myself leave. x phlegm x Brooklyn Street Art - ...loves you more every day. : Brooklyn Street Art Posted on April 7, 2014 “After photographing in the mosh pits for awhile I began to get familiar with patterns in the music. Eventually it got to the point where I could sense the moment coming when things would really cut loose and go berserk,” says painter Dan Witz about his process and method for catching the moment when the roiling mass of hardcore music fans hit the perfect state of frenzy. “NY Hardcore Paintings”, opening this past Saturday night and on view currently at The Jonathan Levine gallery in Chelsea, presents Witz with his new body of convulsing bodies and to say they are a revelation is only part of the story.

Banksy’s Street Art Banksy is an England-based graffiti artist. His satirical street art and subversive epigrams combine irreverent dark humor with graffiti done in a distinctive stenciling technique. Such artistic works of political and social commentary have been featured on streets, walls, and bridges of cities throughout the world. (source)