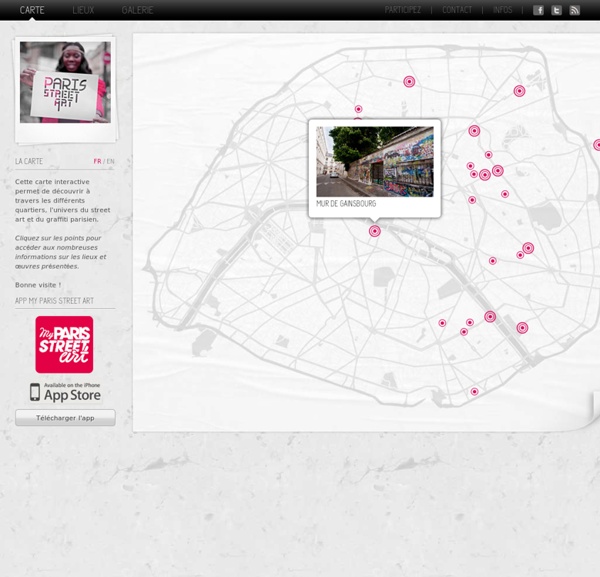 REMED THE ART OF FREESTYLE. Part 4 Saturday, March 1st, 2014 I just ended yesterday the 5th step of the Art of Freestyle, but here is a quick post about the 4th. Sharpie Markers Official Blog Sharpie King, a.k.a. Immy Mellin, hard at work on his next Sharpie creation His name is Immy Mellin but artists and fans alike know him as the Sharpie King. His Sharpie marker moniker is the result of his passionate use of Sharpie markers in all of his art. We found Immy on Flickr.com and were absolutely amazed at just what can be done with Sharpie markers – his work is nothing short of artistic genius! Read on to learn more about Immy and his work. We declare the world as our canvas More info. More info. More Banksy on Street Art Utopia. Storm Thorgerson Storm Thorgerson is undoubtedly the man who made album covers a veritable artistic force. Working with bands like Pink Floyd (who gave him his start), Biffy Clyro, The Mars Volta, Muse and so many more, Thorgerson himself is as legendary as the musicians whose work he visually interprets—and for good reason. A master of his craft, he continues to leave both bands' and fans' mouths aghast with his visually arresting pictorials, which creatively toe the line between fantasy and reality. Upon the recent release of A Foot In The Door—a best-of Pink Floyd album featuring remastered recordings of the original songs—we sat down with the iconic British artist to learn more about his own greatest hits, and how he views his own body of work to date. Can you elaborate on the new cover for A Foot In The Door?

Meet the Man Who Wants to Mine the Moon — Naveen Jain wants to privatize the moon by exploring its precious minerals. — His company, which calls itself MoonEx, was awarded a contract as part of NASA's $10 million Innovative Lunar Demonstration Data. The moon is made of far more valuable stuff than green cheese. And one man wants to capitalize on that fact. NASA, which ended America's space shuttle program in June, says it wants to privatize spaceflight.

François Barraud François-Emile Barraud François Barraud (14 November 1899 – 11 September 1934) was a Swiss painter. Barraud was the eldest of four brothers who all painted or sculpted at various points in their lives.[The brothers, François, Aimé, Aurèle and Charles, were largely self-taught artists having been raised as professional plasterers and house painters. Barraud attended evening classes at the local art school in 1911 together with his brothers. In 1919, he exhibited his paintings in La Chaux-de-Fonds and participated in the National Exhibition of Fine Arts in Basel.

My Yahoo! - Waterfox AOL and Yahoo have come together as Oath, a part of Verizon. By continuing to use our services, you agree to Oath’s new Terms of Service and Privacy Policy. Below is a summary of some of the key updates. How we collect and use data. We’ve updated some of the ways we collect and analyze user data. This includes: analyzing content and information when you use our services, linking your activity on third-party sites and apps with information we have about you, and providing anonymized and aggregated reporting.

Waterfox Drawspace Pro Lessons are designed for artists of all levels and educators, and are logically organized into resources and activities. Eventually, all lessons and E-books authored by Brenda Hoddinott will be available here: four to eight brand new lessons and newly-revised older lessons are being added every month! Upgrade Now: Download all 310 lessons and 4 e-books! Before I Die What matters most to you Interactive public art project that invites people to share their personal aspirations in public. After losing someone she loved and falling into depression, Chang created this experiment on an abandoned house in her neighborhood to create an anonymous place to help restore perspective and share intimately with her neighbors. The project gained global attention and thanks to passionate people around the world, over 1000 Before I Die walls have now been created in over 70 countries, including Kazakhstan, Iraq, Haiti, China, Ukraine, Portugal, Japan, Denmark, Argentina, and South Africa. The walls are an honest mess of the longing, pain, joy, insecurity, gratitude, fear, and wonder you find in every community, and they reimagine public spaces that nurture honesty, vulnerability, trust and understanding.