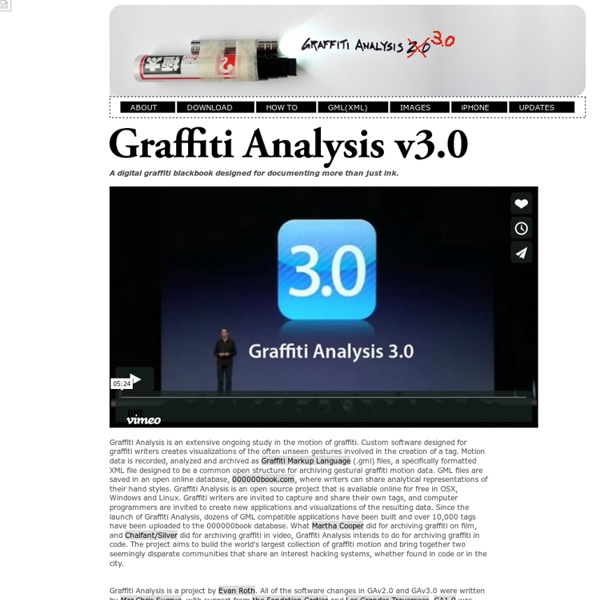 Johannes Vogl - BOOOOOOOM! - CREATE * INSPIRE * COMMUNITY * ART Various artworks by Johannes Vogl. Berlin. Ghost Billboard Erected on U.S.-Canada Border | Underwire By Duncan Geere, Wired UK A U.S. art studio called Lead Pencil Studio has created a sculpture on the border between the United States and Canada that consists of a blank space in the shape of a billboard, surrounded by tangled metal. Titled Non-Sign II, the piece was commissioned by the U.S. government. The artists behind it are Annie Han and Daniel Mihalyo, who’ve won numerous awards for their work over the last decade. The pair carefully twisted metal to give the appearance of a ghost of one of the billboards that populate the area. Han and Mihalyo told The Stranger that they hope the sculpture will add a bit of awareness to the signage landscape in the border zone, as it flies past the inhabitants of passing cars. The work was funded by the U.S. government’s Art in Architecture program. Photo: Lead Pencil Studio See Also:

This is What Happens When You Give Thousands of Stickers to Thousands of Kids | Colossal - StumbleUpon This December, in a surprisingly simple yet ridiculously amazing installation for the Queensland Gallery of Modern Ar, artist Yayoi Kusama constructed a large domestic environment, painting every wall, chair, table, piano, and household decoration a brilliant white, effectively serving as a giant white canvas. Over the course of two weeks, the museum’s smallest visitors were given thousands upon thousands of colored dot stickers and were invited to collaborate in the transformation of the space, turning the house into a vibrantly mottled explosion of color. How great is this? Given the opportunity my son could probably cover the entire piano alone in about fifteen minutes. The installation, entitled The Obliteration Room, is part of Kusama’s Look Now, See Forever exhibition that runs through March 12. If you liked this you’ll also enjoy Roman Ondak’s Room of Heights and Karina Smigla-Bobinski’s helium-filled kinetic drawing sculpture.

Blogger profile: David Riley | Degrees unedited Richard Taylor talks to an ex systems engineer during his final year of Fine Art Drawing at Swindon College School of Art. Creative cryptology and the story of a microprocessor An art process is something of an engineered course of action, fused by language inputted to something made, through carefully balanced models of communication. David Riley, the artist, arises from over thirty years of specialist experience and self-taught knowledge, the veracity of which invents an embedded and systematic creative practice. So what happens after the duration of Riley's BA expires: does the 'system engineer' evolve to an artist having been taught 'how' for four years, or did he simply already know? Codes of enquiry: Riley interprets his pre-functionary past "I am fifty five. 1980s I was a member of a small team responsible for introducing microprocessor training at my company training school. Now that creativity has been subverted by highly organised engineering processes. Deciphering the decipherer

EyeWriter Imperial Investigation School sur Flickr : partage de photos ! Just see the works of Cal Lane - justpaste.it Created: 03/26/2010 Visits: 506782 Online: 0 Carved Book Landscapes by Guy Laramee | Colossal - StumbleUpon (click images for detail) For the better part of three decades multidisciplinary artist Guy Laramee has worked as a stage writer, director, composer, a fabricator of musical instruments, a singer, sculptor, painter and writer. Among his sculptural works are two incredible series of carved book landscapes and structures entitled Biblios and The Great Wall, where the dense pages of old books are excavated to reveal serene mountains, plateaus, and ancient structures. So I carve landscapes out of books and I paint Romantic landscapes. Laramee’s next show will be in April of 2012 at the Galerie d’Art d’Outremont in Montreal.

Graffiti Research Lab The United States of America is going out of business! But here at the U.S. Department of Homeland Graffiti, we want to turn this moment of national embarrassment and hard times into real savings for you and your family. From June 4th through the 28th, the U.S.D.H.G and the Graffiti Research Lab are liquidating all confiscated, high-tech graffiti artifacts and tools, expunged evidence, court exhibits, redacted documents and office furnishings, priced to sell. So grab a handful of Euros or Mao Bucks (U.S. currency still accepted while supplies last) and head on down to Gallery Anno Domini located between U.S. Routes 101 and 280 in Silicon Valley, California. Artist’s Reception: First Friday, June 6th, 2008 8 p.m. ’til late • free and open to the public Exhibition runs from June 4th – June 28th Terrortites 2-layer U.S.D.H.G. Homeland Security Advisory Canvas U.S.D.H.G. More SALE items here on fuckflickr.