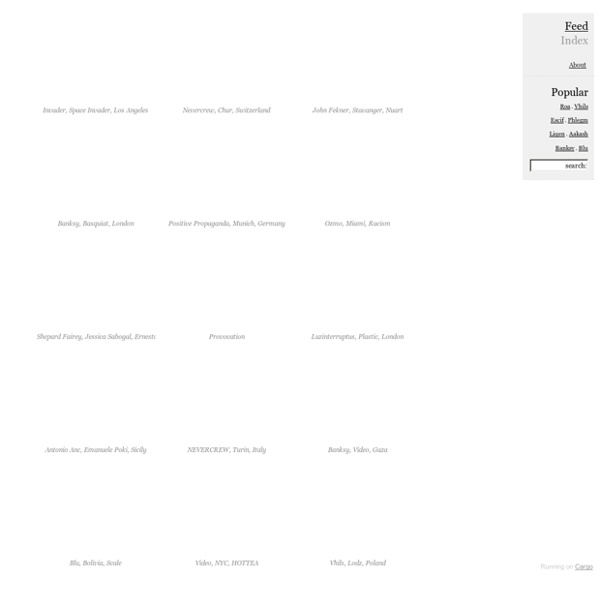 We declare the world as our canvas More info. More info. More Banksy on Street Art Utopia. More info. .BLATANT Ink. .BLATANT Ink. It's BLATANT!! Sidebar Monsieur Plume Raid Crew street art Sat Sept 8th Berkeley, California details A large warehouse in Berkeley, which has been vacant for over a decade, has played a role in the local graffiti scene here in the Bay Area. It was recently purchased by a Bay Area based firm with plans to refurbish the building into a permanent office facility. The owner of the company happens to be on the board for the Oakland Museum of California .

Brooklyn Street Art Posted on April 7, 2014 “After photographing in the mosh pits for awhile I began to get familiar with patterns in the music. Eventually it got to the point where I could sense the moment coming when things would really cut loose and go berserk,” says painter Dan Witz about his process and method for catching the moment when the roiling mass of hardcore music fans hit the perfect state of frenzy. “NY Hardcore Paintings”, opening this past Saturday night and on view currently at The Jonathan Levine gallery in Chelsea, presents Witz with his new body of convulsing bodies and to say they are a revelation is only part of the story. When we saw his first mosh pit paintings a few years ago we were struck by the raw thrilling chaotic energy and calculated abandon in them – and reminded of many such nights in the 80s and 90s in lower Manhattan when we also joined in the fray. Dan Witz “NY Hardcore” Jonathan LeVine Gallery (Photo © Jaime Rojo)

KISSTHEDESIGN on the Behance Network A3 Studio, the graphic design studio based in Lausanne, Switzerland, has been commissioned to develop the new corporate identity of Kissthedesign gallery. The gallery, established in the market of post war design and contemporary art, celebrated its two-years birthday with an expanded concept and a new gallery space. To compliment its enhanced activity, Kissthedesign decided to get a new visual identity, based on the early logo’s colours and rounded shape. A3 completely rethought and redesigned the visual identity of Kissthedesign, the font "Kiss rounded" was specially developed for the gallery, a rounded typography that shows a bright and contemporary style

Street Art Utopia's Best of 2011 I couldn’t help but direct everyone to fellow public art loving blog Street Art Utopia as they have compiled a pretty decent list of the best street art of 2011. If you are just getting into the wonderful world of pasting, spraying or making the streets a more creative place, this list is a great place to start (short of Wall and Piece). One of the best things about this genre is it’s diversity – you can decided what you find gimmicky/twee or meaningful and awe-inspiring. Street art has always been the public’s voice, and the art world has yielded success to those with great ideas and a call for change. More from the list after the jump!