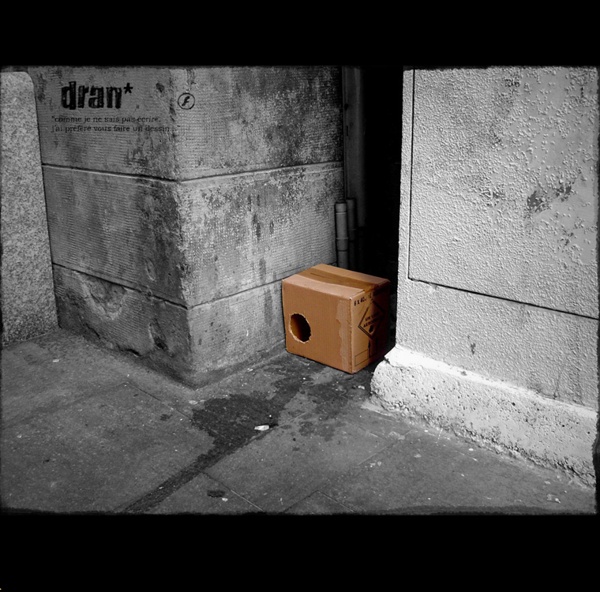 L'heure eXquise Taras Kuščynskyj (Source: virginwhoreofbabylon) Dario Catellani Dran – art pack 1 Keep in touch close Dran – art pack 1 Author: arsek July 14, 2010 the soup Source – LINK 7 Comments SECOND EDITION (2008) : PANOS 2013, FAKE ROADSIGNS This edition is produced by Grand Lyon for Lyon 2013. Powered by Unchi Leisure Center and Arty Farty, curated by Kanardo, supported by Bewol and 55-555. So many thanks to all the artists who have been involved in this project. The second edition of this project couldn't have happened without the precious help of all the guys who have erected the signs in the streets. Acknowledgments to Vincent Carry at Arty Farty, Olivier and all the team at Autocolor, Virginie Duhamel at Grand Lyon, Jeanne Wagner de Reyna and Alice Dupuis at Lyon 2013 committee, Natacha Hirth at Mairie de Lyon... and CartOne (I will buy you another computer!). All pictures © KANARDO

Swoon New Street Piece - London, UK Brooklyn based street artist Swoon is in London and she pasted up one of her intricate large work in the East London area yesterday. Her work is often portraits of everyday people contrasted by both art and historical elements and this piece is no exception. Last time she visited London back in November 2010 she left 4 pieces pasted up on the streets so hopefully this first installation is just a beginning closely followed by some other work by her. Take a look at some more images after the break and then check back with us shortly for more street art updates from London. 100 of the Best Street Art Photos for 2013 December 13, 2013 in Art, Painting, Street art As 2013 comes to a close, we’ve scoured the world to find the best street art created over the last couple of years. With so many great works produced during this time it was a tough job, but we needed to stop somewhere!

Banksy Le Rat By: Andrew Dyck As New York City continues to moisten her panties over the month-long artist-in-residency Banksy has graced us with during the course of October, I can’t help but want to shout, “Doesn’t anybody realize that he’s just ripping off Blek Le Rat?!” Blek le who? Okay, so I guess you’re going to need a primer in street as well. Street Artist Ludo Merges Technology and Nature to Create a New Order of Hybrid Organisms Paris-based artist Ludo (previously) has been active lately with works popping up all over France. His trademark monochromatic paste-ups with dripping green highlights often merge technology with plants or insects to create what he calls a “new order of hybrid organisms”. To see more of his work you can always stop by StreetArtNews or follow the artist’s blog.

Two Points – Pen, Ruler And Compass Combination Stationery by Jeonghwan Bae Two Points Are Better Than One You never know when inspiration strikes or that you run out of stationery; hence the Two Points Pen is a great way to always be prepared. An innovative combination of a pen, ruler and compass point, you can draw circles on the go, anywhere and every time! I guess architects and interior designers will agree with me! Designer: Jeonghwan Bae eBooks@Adelaide: List of Authors Abbott, Edwin A., 1838-1926 About, Edmond, 1828-1885 Adams, Henry, 1838-1918 Aeschylus, 525-456 BCE Aesop, 620-560 BCE