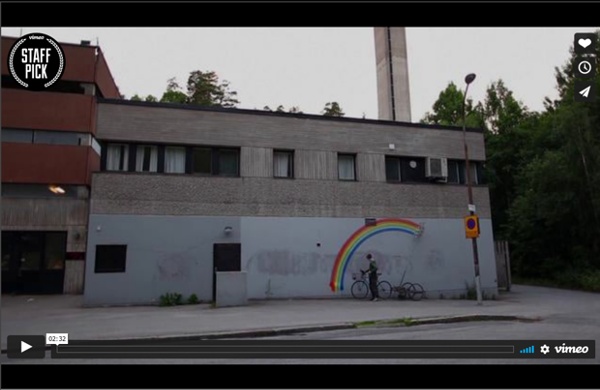 SWITL scoops oozy goop with amazing robotic precision (video) Look, sometimes, not often, but sometimes we'll miss a truly spectacular and mind bending story that requires a double-back. The SWITL robotic hand is just such a case. The patent-pending technology looks to have been revealed on video back in late October showing the Furukawa Kikou robot deftly lifting a ketchup and mayonnaise mess from a table and then replacing it unchanged from its original shape. The tech was developed for bakeries with the intention of automating the handling of soft substances that were either too malleable or too icky for human hands. Unfortunately, Furukawa Kikou isn't providing any details about the science behind SWITL so we'll just assume that it's Satan's work until otherwise informed. See what we mean in the video after the break.

Japanese Museum Unveils A Giant Globe Made of 10,000 Live-Updating OLED Panels Geo-Cosmos If you want to see what Earth looks like from space, become an astronaut (or, barring that, a space tourist). For the next best view, pay a visit to Tokyo’s National Museum of Emerging Science and Innovation where a massive, nearly 20-foot spherical OLED orb--the world’s first large scale spherical OLED --offers a satellite’s-eye view of the planet in super high resolution.

Anamorphic Graffiti French collective Paper Donut has painted a series of walls with three-dimensional shapes. (Above) The image is part of an ad campaign for fashion store Sqwear, and the other two visuals are personal projects. See also: “Are you ready for a paper breakfast?” Photos © Paper Donut Link via Unurth New camera promises to capture your whole life - tech - 16 October 2009 A camera you can wear as a pendant to record every moment of your life will soon be launched by a UK-based firm. Originally invented to help jog the memories of people with Alzheimer's disease, it might one day be used by consumers to create "lifelogs" that archive their entire lives. Worn on a cord around the neck, the camera takes pictures automatically as often as once every 30 seconds.

Vicon Revue Introducing the next generation Revue. Revue 3MP has four times more storage and a 3 megapixel sensor. For detailed product information including new features, example images and a downloadable brochure click here . Revue is a digital camera designed to take photos without intervention whilst being worn by the user. Based on Microsoft SenseCam technology, Revue is a research tool aimed at researchers as an aid for people with memory loss.

Almost Untouched Nature - Waterfall Restaurant, Philippines Image credit Visiting this interesting Waterfall Restaurant located in San Pablo City, Philippines at the Villa Escudero Plantations and Resort can be a truly unique and memorable experience. Visitors can enjoy in lunch served on bamboo dining tables while the crystalline running water flows under their feet. Besides enjoying the authentic local cuisine, you can enjoy the almost untouched nature of the region formerly occupied by a farm and coconut plantations. If you need to spend calories after lunch then you have opportunity to do some sports activities like Bamboo rafts .

Perfect Iced Coffee Iced coffee is my life. When I wake up, often around the time party animals on the west coast are just heading home, I start each day not with a cup of freshly brewed hot java, but with a tall, blessed glass of creamy iced coffee in a glass. I’ve been an iced coffee freakazoid for years and years. To say I couldn’t live without it is an understatement. Art genius: Nine-year-old painter tipped for greatness after buyers from across the world snap up his work Only started painting lessons in 2008Work bought by international collectors for tens of thousands of poundsPaints three pictures a weekProud mum has written book about his prodigal success By Daily Mail Reporter Published: 13:59 GMT, 12 July 2012 | Updated: 20:04 GMT, 12 July 2012 Nine-year-old Kieron Williamson's latest set of paintings sold within minutes fetching £250,000. A nine-year-old art genius nicknamed 'Mini Monet' is about to become a millionaire after selling his latest collection of 24 paintings for £250,000. Kieron Williamson, from Norfolk, had his landscape pictures snapped up by telephone and internet buyers from around the world in just 15 minutes during a recent sale.