Overfishing - A global environmental problem, threat to our oceans and disaster. 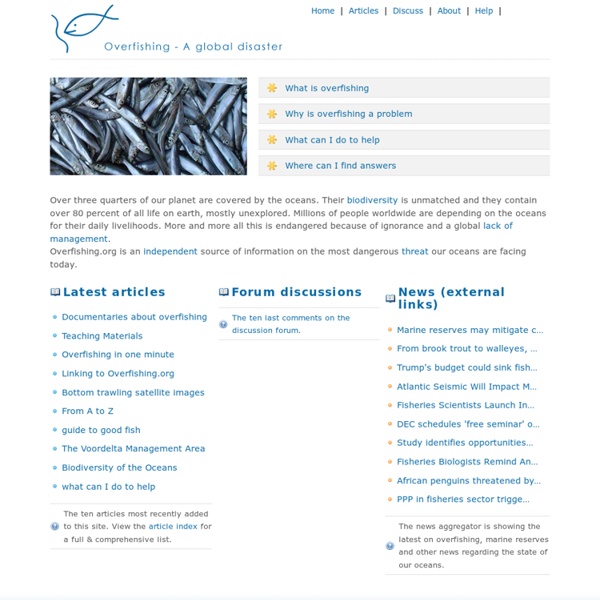 STOP SHARK FINNING Why is overfishing a global concern? The problem of Overfishing We all love to eat fish, don’t we? It is the best source of protein and very healthy food in many ways. We also know where fish comes from—our oceans. Many decades ago, our oceans were full of fishes but unfortunately, this is not the case today. Our world today faces many complex issues ranging from pollution, climate change, wars, food crises, waste, over-population… and of course over-fishing. These are all problems we have created for ourselves, often as a result of our selfish activities. Overfishing particularly is one issue that is often underrated. By the end of this lesson, we will know how catastrophic overfishing is and how we are heading down a steep slope to a global disaster if we do not act quickly enough.

National Oceanic and Atmospheric Administration Global carbon dioxide concentrations surpass 400 ppm Greenhouse gas rise is 'significant milestone' Yahoo! Answers - Home Overfishing -- National Geographic Ocean overfishing is simply the taking of wildlife from the sea at rates too high for fished species to replace themselves. The earliest overfishing occurred in the early 1800s when humans, seeking blubber for lamp oil, decimated the whale population. Some fish that we eat, including Atlantic cod and herring and California's sardines, were also harvested to the brink of extinction by the mid-1900s. Highly disruptive to the food chain, these isolated, regional depletions became global and catastrophic by the late 20th century. When It Started Marine scientists know when widespread overfishing of the seas began. In the mid-20th century, international efforts to increase the availability and affordability of protein-rich foods led to concerted government efforts to increase fishing capacity. But by 1989, when about 90 million tons (metric tons) of catch were taken from the ocean, the industry had hit its high-water mark, and yields have declined or stagnated ever since. When It Will End

Sea Shepherd Seahorses, Seahorse Pictures, Seahorse Facts Seahorses are truly unique, and not just because of their unusual equine shape. Unlike most other fish, they are monogamous and mate for life. Rarer still, they are among the only animal species on Earth in which the male bears the unborn young. Found in shallow tropical and temperate waters throughout the world, these upright-swimming relatives of the pipefish can range in size from 0.6 inches (1.5 centimeters) to 14 inches (35 centimeters) long. Male seahorses are equipped with a brood pouch on their ventral, or front-facing, side. Because of their body shape, seahorses are rather inept swimmers and can easily die of exhaustion when caught in storm-roiled seas. They anchor themselves with their prehensile tails to sea grasses and corals, using their elongated snouts to suck in plankton and small crustaceans that drift by. Population data for most of the world’s 35 seahorse species is sparse.

UC Davis School of Vet Med: Oiled Wildlife Care Network: What Happens During an Oil Spill Recovery and Transportation - When there is an oil spill, specially trained workers go out and collect oiled wildlife. They wear protective clothing that keeps the oil off of their skin. Once they collect the oiled animals, they stabilize, or make sure they are not in immediate danger, then transport them to a medical facility for care. Intake – When the oiled animals get to the medical facility they go through intake, which is a full physical exam, just like you get when you go to the doctor. Workers will check their temperature, how much they weigh, whether they look healthy, and how much oil is on them. Stabilization – After the oiled animals have gone through intake, they are stabilized. Cleaning – This is the step where the oiled animals are finally washed. Pre-release Conditioning – Conditioning a cleaned bird usually takes 3 to 5 days, but can take much longer if the animal had injuries or wounds.