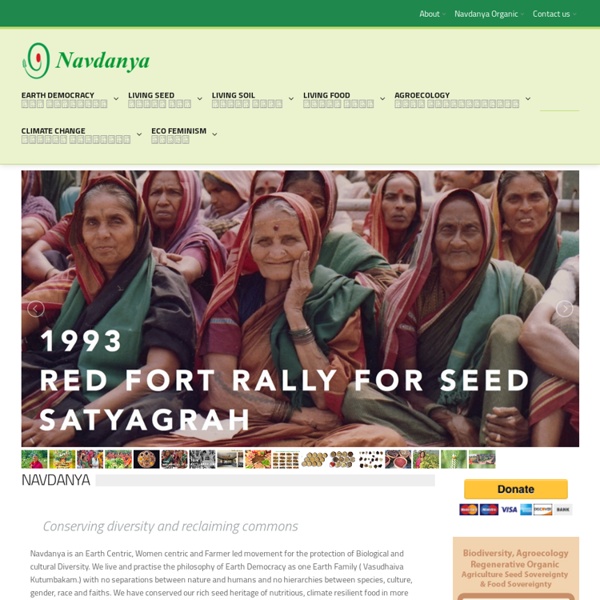 Navdanya means “ nine seeds ” (symbolizing protection of biological and cultural diversity) and also the “ new gift ” (for seed as commons, based on the right to save and share seed s In today’s context of biological and ecological destruction, seed savers are the true givers of seed. This gift or “dana” of Navadhanyas (nine seeds) is the ultimate gift – it is a gift of life, of heritage and continuity. Conserving seed is conserving biodiversity, conserving knowledge of the seed and its utilization, conserving culture, conserving sustainability. Navdanya is a network of seed keepers and organic producers spread across 16 states in India. Navdanya has helped set up 65 community seed banks across the country, trained over 5,00,000 farmers in seed sovereignty , food sovereignty and sustainable agriculture over the past two decades, and helped setup the largest direct marketing, fair trade organic network in the country.

Healthy Active - Sample Daily Kilojoule and Nutrient Calculator This sample daily kilojoule and nutrient calculator is for people over the age of 19 years. It does not apply to children. Calculate your daily energy and nutrient composition. Options have been provided for breakfast, lunch, dinner, snacks and beverages. Choose one or more options from the list below that best represent your daily consumption to find out the total kilojoules and nutrient composition of the food you consumed for that day.

EARTHWORKS Earthworks' Mission Earthworks is a nonprofit organization dedicated to protecting communities and the environment from the adverse impacts of mineral and energy development while promoting sustainable solutions. Earthworks stands for clean air, water and land, healthy communities, and corporate accountability. We work for solutions that protect both the Earth’s resources and our communities. The Greenroof & Greenwall Projects Database This database was prepared by Greenroofs.com from published public accounts and individual project stakeholders, and is offered "as is" for informational purposes only - it is not complete and is an ongoing open source, community based transparent, living research document. Errors in a database of this magnitude are very likely, so please let us know of any discrepancies you may find at: projects@greenroofs.com. Neither Greenroofs.com nor any agency thereof, nor any of their employees, makes any warranty, express or implied, or assumes any legal liability or responsibility for the accuracy, completeness, or usefulness of any information, apparatus, product, or process disclosed, or represents that its use would not infringe upon privately owned rights. Please read the "Disclaimers" section for more details regarding disclaimers of endorsement and liability.

What We Do - Rebellious Truth So What the Friggins Do We Do? Rebellious Truths is a social movement for truth, integrity and accountability in our political and media systems, and our culture at large. We are educating the populace on the major issues they are not being informed about, or being misinformed about, that are essential to their proper self-governance and livelihood. We are breaking down the walls of rigid dogma and falsehoods that have prevented us from coming together and finding sustainable solutions for all.

'Global deforestation hotspot': 3m hectares of Australian forest to be lost in 15 years Australia is in the midst of a full-blown land-clearing crisis. Projections suggest that in the two decades to 2030, 3m hectares of untouched forest will have been bulldozed in eastern Australia. The crisis is driven primarily by a booming livestock industry but is ushered in by governments that fail to introduce restrictions and refuse to apply existing restrictions. And more than just trees are at stake. American Academy of Pediatrics Cuts Ties with Monsanto Months ago Mamavation learned that the American Academy of Pediatrics was in a sponsorship relationship with Monsanto, a chemical company and makers of DDT, PCBs, Agent Orange, glyphosate & GMOs. In fact, Monsanto has been deemed the 3rd most hated company in the United States by the Harris Poll this year measuring “reputation quotient” which basically means how people feel about them. Baffled by this relationship, Mamavation founder Leah Segedie contacted the AAP through a close friend and colleague and was put in touch with their Public Affairs team. “I was completely shocked that the American Academy of Pediatrics, an organization that moms put their trust in at some of the most vulnerable times in their lives was associating with a company that didn’t elicit trust at all.

September 1, 2014 Issue - Vol. 92 Issue 35 [+]Enlarge CLEVER’S prototype modular design would enable failed components to be replaced, extending the useful life of the phone. Credit: Loughborough University More than 1.8 billion new cell phones will be bought in 2014, but within just a few years, 44% of them will end up “hibernating” in drawers. New awesome Meat-Calculator: Check your impact on the environment A mild summer evening without a sizzling steak or a great burger on the grill? Unthinkable! America is a nation of meat eaters. Actually, Americans have the highest meat consumption in the world. But what does this mean on a personal level? The Meat Blitz-Calculator shows you how it all adds up, based on your personal diet.

12 Life Lessons from a Man Who's Seen 12000 Deaths Rooted in the hearts of many Hindus is the belief that if you breathe your last in Kashi (Varanasi) you attain what is popularly known as ‘Kashi Labh’ or ‘the fruit of Kashi’—moksh or “release from the cycle of rebirth impelled by the law of karma”. Kashi Labh Mukti Bhawan in Varanasi is one of the three guesthouses in the city where people check in to die. The other two are Mumukshu Bhawan and Ganga Labh Bhawan. Established in 1908, Mukti Bhawan is well-known within the city and outside. Bhairav Nath Shukla has been the Manager of Mukti Bhawan for 44 years. He has seen the rich and the poor take refuge in the guesthouse in their final days as they await death and hope to find peace.

Tasmanian salmon should be off the menu for now, says conservation group It’s one of Australia’s – and the world’s – favourite fish but Tasmanian Atlantic salmon should be off the menu for now, according to the Australian Marine Conservation Society, publishers of Australia’s independent sustainable seafood guide. On Wednesday, the AMCS downgraded the farmed fish’s rating from an amber “Think Twice” to a red “Say No” due to ongoing environmental concerns. The previous review was in 2015. Adrian Meder, the sustainable seafood program manager at AMCS, said the salmon farming industry had been enabled to expand “too far and too fast” in Macquarie Harbour, on the state’s west coast, where key players Huon Aquaculture, Tassal and Petuna lease several industrial fish pens.

Oxytocin Changes Everything What does petting a cat, hugging a friend, deep breathing, a walk in the woods, and giving away money to someone have in common? These are but a few ways to release the hormone of love and connection, Oxytocin. We humans are like puppets on strings.

Climate Change Journals and Magazines on environmental-expert.com Current filtering criteria You can remove a filter by clicking on the x Keyword: climate change × Climatic Change by Springer