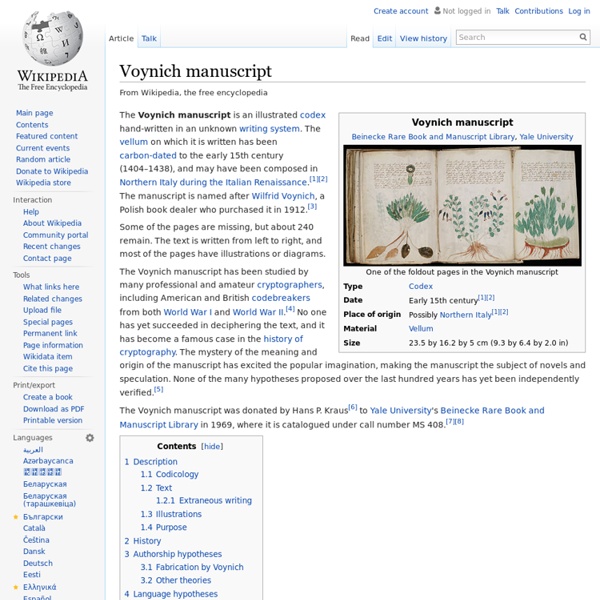 The Voynich manuscript is an illustrated codex hand-written in an unknown writing system. The vellum on which it is written has been carbon-dated to the early 15th century (1404–1438), and may have been composed in Northern Italy during the Italian Renaissance.[1][2] The manuscript is named after Wilfrid Voynich, a Polish book dealer who purchased it in 1912.[3] Some of the pages are missing, but about 240 remain. The text is written from left to right, and most of the pages have illustrations or diagrams. The Voynich manuscript has been studied by many professional and amateur cryptographers, including American and British codebreakers from both World War I and World War II.[4] No one has yet succeeded in deciphering the text, and it has become a famous case in the history of cryptography. The mystery of the meaning and origin of the manuscript has excited the popular imagination, making the manuscript the subject of novels and speculation. The Voynich manuscript was donated by Hans P.

Dyatlov Pass incident The Dyatlov Pass incident (Russian: Гибель тургруппы Дятлова) refers to the unsolved deaths of nine ski hikers in the northern Ural Mountains in the Soviet Union (now Russia) between 1 February and 2 February 1959. The area in which the incident took place was named Dyatlov Pass in honor of the group's leader, Igor Dyatlov. The experienced trekking group, who were all from the Ural Polytechnical Institute, had established a camp on the slopes of Kholat Syakhl when disaster struck.

Kuntz-Kamera of St. Petersburg Posted on June 27, 2007 by “Kuntzkamera” it’s a museum in St. Petersburg. It’s a really strange place, was founded by Russian Tsar Peter the First. He collected different weird stuff all over the Russia to this museum: freaky people and animals preserved in alcohol, torture instruments, strange paintings and much more. Charles Bonnet syndrome Charles Bonnet syndrome (CBS) is the experience of complex visual hallucinations in patients with visual loss. First described by Charles Bonnet in 1760,[1][2] it was first introduced into English-speaking psychiatry in 1982.[3] Characteristics[edit] Sufferers, who are mentally healthy people with often significant visual loss, have vivid, complex recurrent visual hallucinations (fictive visual percepts).

My Visit To Evernote Headquarters Last week, I got to visit Evernote‘s headquarters in Redwood City, California. Evernote brought all of its ambassadors out for a kind of training/meetup and it was a unique experience. As I mentioned last week, it was a whirlwind trip for me. I got on a plane to San Francisco at noon on Thursday, and I was back home before 7am on Saturday. But those 36 hours were packed. I got to meet new people, see an old friend, and be one of the recipients of Evernote’s incredible hospitality.

Marree Man Landsat thermal image of the Marree Man in central Australia taken 28 June 1998 The Marree Man, or Stuart's Giant, is a modern geoglyph discovered by air on 26 June 1998. It appears to depict an indigenous Australian man hunting birds or wallabies with a throwing stick. It lies on a plateau at Finnis Springs 60 km (18 mi) west of the township of Marree in central South Australia. 2011 Octobre «Few and Far This is not our normal post of art. Instead we wanted to take the time to bring some realism to the site. Few and Far is very much an diverse group of women, not everything said on this site is opinion of the collective as a whole. The Shapes of Medieval Swords Medieval Sword Shapes - Their unique shapes and changes over the centuries The Shapes of Medieval Swords Swords from the medieval Period went through some wonderful changes as the tools and technology of metal working changed. This change is also nicely seen in cultural differences in the swords. Here is a look at some of the major shapes of swords and a little explanation of them. In a future post I will take a closer look at each type of sword.

Sailing stones Sailing stones, sliding rocks, and moving rocks all refer to a geological phenomenon where rocks move and inscribe long tracks along a smooth valley floor without human or animal intervention. Tracks from these sliding rocks have been observed and studied in various locations, including Little Bonnie Claire Playa in Nevada,[1] and most notably Racetrack Playa, Death Valley National Park, California, where the number and length of tracks are notable. At Racetrack Playa, these tracks have been studied since the early 1900s, yet the origins of stone movement are not confirmed[2] and remain the subject of research for which several hypotheses[3] exist. The stones move only every two or three years and most tracks develop over three or four years. Stones with rough bottoms leave straight striated tracks while those with smooth bottoms tend to wander.

The Standard Memorandum – Word Notebooks Inspired by pocket journals from the early to mid 1900's, The Standard Memorandum is designed to chronicle a year of your life. Word. has teamed up with designer and illustrator, Jon Contino, to create a modern version of this storied notebook. The Standard Memorandum is laid out so you simply jot down a line or two every day for a year and are left with a memento you can save or pass down. The project began after Jon discovered his wife's great-grandfather's pocket journals from the early 1900's that basically recreated what his life was like. Born out of a desire to start doing this himself, Jon partnered with Word. Notebooks to create a journal like the ones he found.

Taman Shud Case Following a public appeal by police, the copy of the Rubaiyat from which the page had been torn was located. On the inside back cover of the book, detectives were able to read – in indentions from handwriting – a local telephone number, another unidentified number and a text that resembled an encrypted message. The text has not been deciphered or interpreted in a way that satisfies authorities on the case. The case has been considered, since the early stages of the police investigation, "one of Australia's most profound mysteries".[1] There has been intense speculation ever since regarding the identity of the victim, the cause of his death and the events leading up to it. In addition to intense public interest in Australia during the late 1940s and early 1950s, the Tamam Shud case also attracted international attention.