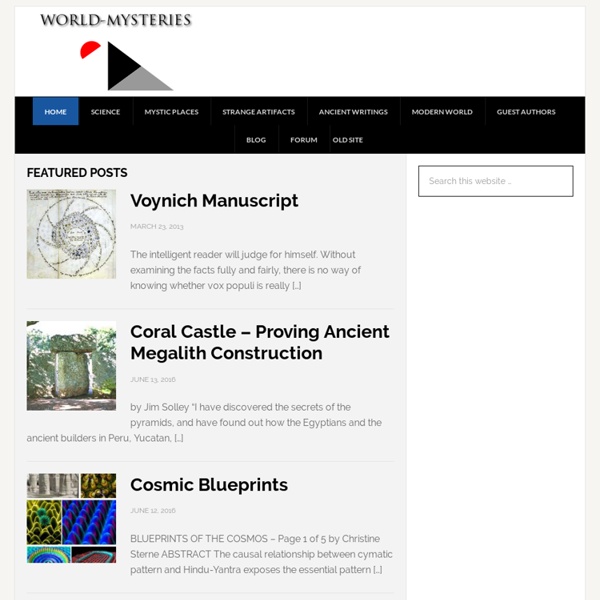 Paranormal Zone X Amityville: The True Story In December 1975, George and Kathleen Lutz and their three children moved into 112 Ocean Avenue, a large Dutch Colonial house in Amityville. This was a suburban neighborhood which was located on the south shore of Long Island, New York. Pumapunku Coordinates: An example of high-precision small holes Stone blocks at Pumapunku Integrating Git and SVN with the Mantis Bug Tracker - NoSwap.com With the ongoing work towards a 1.2 release, the Mantis Bug Tracker features a brand new plugin and event system, which will allow users to implement entirely new features for MantisBT without ever needing to touch any of the core codebase. It’s a very extensible system, and allows plugin authors to implement only what they need, while still allowing advanced plugins as much flexibility as possible. Plugins can be as small as a single file with 20 lines of code, or as large as entire hierarchies of files, pages, with their own API’s. As the core developer of the new plugin system, I have been working on a variety of plugins. In particular, I have created a vastly improved method of integrating source control repositories within MantisBT. The Source Integration package tracks repository information based on a series of changesets, each of which may have a list of affected files.

The Top 10 Psychology Studies of 2010 The end of 2010 fast approaches, and I'm thrilled to have been asked by the editors of Psychology Today to write about the Top 10 psychology studies of the year. I've focused on studies that I personally feel stand out, not only as examples of great science, but even more importantly, as examples of how the science of psychology can improve our lives. Each study has a clear "take home" message, offering the reader an insight or a simple strategy they can use to reach their goals , strengthen their relationships, make better decisions, or become happier. If you extract the wisdom from these ten studies and apply them in your own life, 2011 just might be a very good year. 1) How to Break Bad Habits If you are trying to stop smoking , swearing, or chewing your nails, you have probably tried the strategy of distracting yourself - taking your mind off whatever it is you are trying not to do - to break the habit.

History's Most Overlooked Mysteries Tuan C. Nguyen | July 25, 2007 10:23am ET Credit: Photographed by Aurel Stein, circa 1910 Although many of life's great mysteries remain unsolved, there are some lesser known ones that also have stumped researchers for centuries. Here's a look at some of the most intriguing historical mysteries, from the mysterious, and blonde, Tarim mummies from China to the undecipherable Voynich manuscript to lost city of Helike. Secret Teachings of All Ages Index For once, a book which really lives up to its title. Hall self-published this massive tome in 1928, consisting of about 200 legal-sized pages in 8 point type; it is literally his magnum opus. Each of the nearly 50 chapters is so dense with information that it is the equivalent of an entire short book. If you read this book in its entirety you will be in a good position to dive into subjects such as the Qabbala, Alchemy, Tarot, Ceremonial Magic, Neo-Platonic Philosophy, Mystery Religions, and the theory of Rosicrucianism and Freemasonry. Although there are some questionable and controversial parts of the book, such as the outdated material on Islam, the portion on the Bacon-Shakespeare hypothesis, and Hall's conspiracy theory of history as driven by an elite cabal of roving immortals, they are far out-weighed by the comprehensive information here on other subjects. For many years this book was only available in a large format edition which was hard to obtain and very expensive.

HTTP Streaming Video This is the simplest and cheapest way to stream video from a website. Small to medium-sized websites are more likely to use this method than the more expensive streaming servers. For this method you don't need any special type of website or host — just a host server which recognises common video file types (most standard hosting accounts do this). You also need to know how to upload files and how to create hyperlinks (see our website tutorials for more info).

Psycology: Know Thyself I’ve decided to start a series called 100 Things You Should Know about People. As in: 100 things you should know if you are going to design an effective and persuasive website, web application or software application. Or maybe just 100 things that everyone should know about humans! The order that I’ll present these 100 things is going to be pretty random. So the fact that this first one is first doesn’t mean that’s it’s the most important.. just that it came to mind first.

The Ajanta Caves – Ancient Temples Carved from Rock Two thousand two hundred years ago work began on an extensive series of cave monuments in Maharashtra, India. Over a period of hundreds of years, thirty one monuments were hewn piece by piece from the rock face. Then, some speculate around the year 1000AD, they fell in to disuse. Dense jungle grew around, hiding the caves away from human eyes. Make Any Dead URL Work Again Have you ever gotten frustrated during a web search because you suddenly hit a dead end with a link that didn't work? Never again! DeadURL.com allows you to find exactly what you're looking for with any broken link -- even links to websites that have been removed forever! Just type your dead url in the box below, and you can visit backup locations for your missing web page... How You Benefit - You Save Time One click can take you from a broken link's error page to a working backup.

Psych Experiements Psychology is the study of the human mind and mental processes in relation to human behaviors - human nature. Due to its subject matter, psychology is not considered a 'hard' science, even though psychologists do experiment and publish their findings in respected journals. Some of the experiments psychologists have conducted over the years reveal things about the way we humans think and behave that we might not want to embrace, but which can at least help keep us humble. That's something. 1. 'Lord of the Flies': Social Identity Theory