7 HISTORY. 10 Murder Mysteries That Made History. Crime Assassinations of presidents and kings aren’t the only killings that change our world. 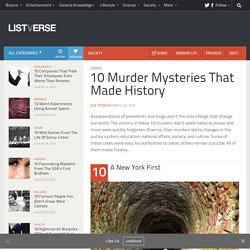 The victims in these 10 murders didn’t wield national power and most were quickly forgotten. Even so, their murders led to changes in the justice system, education, national affairs, society, and culture. Some of these cases were easy for authorities to solve; others remain a puzzle. All of them made history. 10A New York First On the evening of December 22, 1799, Gulielma “Elma” Sands left her home in a Manhattan boarding house after confiding to her cousin that she was marrying her fellow boarder, Levi Weeks.

Elma’s demise produced a list of “firsts” in US history. Fortunately for Levi, his brother had something that still figures prominently in American justice: money. 7 Unsolved Murder Mysteries To Keep You Up At Night. 25 Most Frustrating Unsolved Crimes Ever. Most Famous Unsolved Murders of All Time. One of the most baffling concepts within the human race is that of murder and yet, for those who believe in the story of Cain and Able, it is a concept which has long played a role in society. 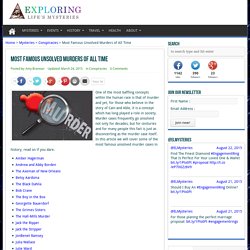 Murder cases frequently go unsolved not only for decades, but for centuries and for many people this fact is just as disconcerting as the murder case itself. In this article we will cover some of the most famous unsolved murder cases in history, read on if you dare. Amber Hagerman Amber Rene Hagerman was just nine years old when she was abducted and murdered. Amber was riding her bike close to her grandparent’s home in Arlington, Texas on January 13, 1996 when she was snatched. Amber’s family would appear on television pleading for her life and her safe return. While Amber’s killer has yet to be caught her legacy remains. Andrew and Abby Borden. Ancient Mysteries. 10 Unsolved Mysteries From Ancient Times. Mysteries Tourists travel to famous landmarks and spooky destinations every year, hoping for a deeper insight into mysterious structures and what happened within their perimeter thousands of years ago. 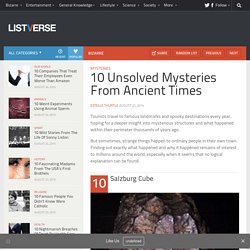 But sometimes, strange things happen to ordinary people in their own town. Finding out exactly what happened and why it happened remains of interest to millions around the world, especially when it seems that no logical explanation can be found. 10Salzburg Cube In 1885, Reidl, an employee at an Austrian foundry, discovered the mysterious Salzburg Cube (also known as the Wolfsegg Iron). The next year, a professor at the museum named Adolf Gurlt studied the cube and determined it to be part of a meteorite. 10 Great Ancient Mysteries Of North America- MessageToEagle.com.

MessageToEagle.com - In every corner of the world we come across fascinating ancient mysteries that encourage us to learn more about our mysteries past. 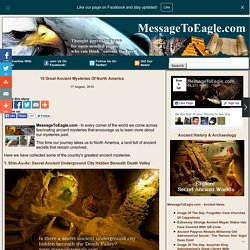 This time our journey takes us to North America, a land full of ancient secrets that remain unsolved. Here we have collected some of the country's greatest ancient mysteries. The idea that there could be a secret 5,000-years-old underground city hidden somewhere beneath Death Valley, California is fascinating. According to those who entered the subterranean tunnels and visited this marvelous place the city was once inhabited by an unknown race. Now, thousands of years later the place had been abandoned, but the visitors saw strange mummies and curious old artifacts.

Before we can enter the realms of this mysterious subterranean world, we must first listen to the words of the Paiute Indians who have legends describing an underground world few people have heard of. 2. Unexplained Phenomena. Ancient Origins seeks to uncover, what we believe, is one of the most important pieces of knowledge we can acquire as human beings – our beginnings. 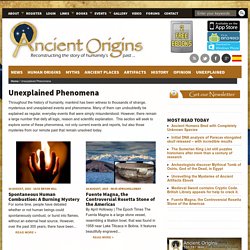 Top 10 Historical Unsolved Mysteries. Since the world began, we have been surrounded by mysteries. 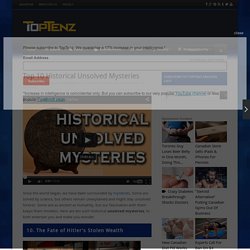 Some are solved by science, but others remain unexplained and might stay unsolved forever. Some are as ancient as humanity, but our fascination with them keeps them timeless. The world’s biggest mysteries scientists still can’t solve. Loaded: 0% Progress: 0% The mystery of Easter Island and the Moai statues that inhabit it is a fascinating tale. 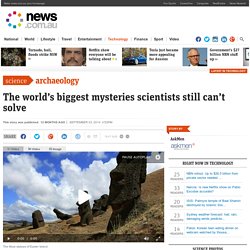 Top 12 Unsolved Mysteries of the World - EnkiVillage. The 20 Coolest Unsolved Mysteries in History. 13 of History's Unsolved Mysteries. 9 Creepily Curious Unsolved Mysteries. 25 Greatest Unsolved Mysteries. 15 Biggest Unsolved Mysteries in the World. From hieroglyphs indecipherable even today to stories of hikers found dead in unexplainable positions, we count 15 mysteries that have yet to been solved or even understood. 15 – Voynich Manuscript, A book created in the early 1400s that is almost entirely composed of a language never before seen and never deciphered sinceIt comes with an array of colourful drawings of strange plant-like creatures and celestial diagrams, but the contents remain elusive with some theorising it might’ve been a book on early medieval medicineHowever, due to the amount of star charts, some propose the book to have alien origins, whereas others believe it was a hoax which seems unlikely since the money and complexity required would’ve been unbelievably highYou can find the pages floating around on the internet, but so far nobody has had much luck 14 – Green Children, 13 – Rongorongo, 12 – Dyatlov Pass, 11 – The Immortal Count, 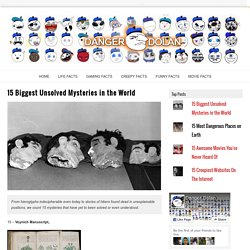 Roman Mysteries. 89 Of The Creepiest Unsolved Mysteries Of All Time. Reddit users discussed the creepiest unsolved mysteries that haunt them to this day. 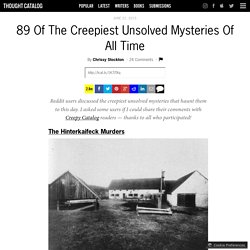 I asked some users if I could share their comments with Creepy Catalog readers — thanks to all who participated! The Hinterkaifeck Murders I love reading about unsolved mysteries, especially weird/creepy ones, and the Hinterkaifeck murders is one of most fascinating to me.A farmer in Germany back in the 1920s had noticed mysterious footprints in the snow around his house. There was also strange stuff happening around the farm. Footsteps in the attic, a newspaper that no one in the family had bought, and eventually the house keys disappeared. The Sodder Children Mystery 1 A.M. – Parents wake up, house is on fire.

World-Mysteries.com. Mysteries. Strange Mysteries. 13 unsolved mysteries that still need answers in 2015. From a missing plane to a vast city hidden beneath Earth, 2014 left many stones unturned. 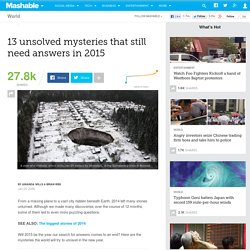 Although we made many discoveries over the course of 12 months, some of them led to even more puzzling questions. Will 2015 be the year our search for answers comes to an end? Here are the mysteries the world will try to unravel in the new year. What happened to the plane that vanished without a trace? A Malaysia Airlines flight vanished without a trace while en route from Kuala Lumpur to Beijing on March 8. After more than nine months, not a single piece of debris from MH370 has turned up. Why is Bardarbunga still erupting? Image: ARCTIC-IMAGES/CORBIS The eruption of the Bardarbunga volcano in Iceland began at the end of August and continues to this day. Bardarbunga created a 32 square mile lava field, which is the largest in Iceland since the Laki eruption in 1783, and the Icelandic Met Office says it is “probably the third largest lava field on Earth” since 1783.