Ancient underwater cities being found that are 10,000 years old 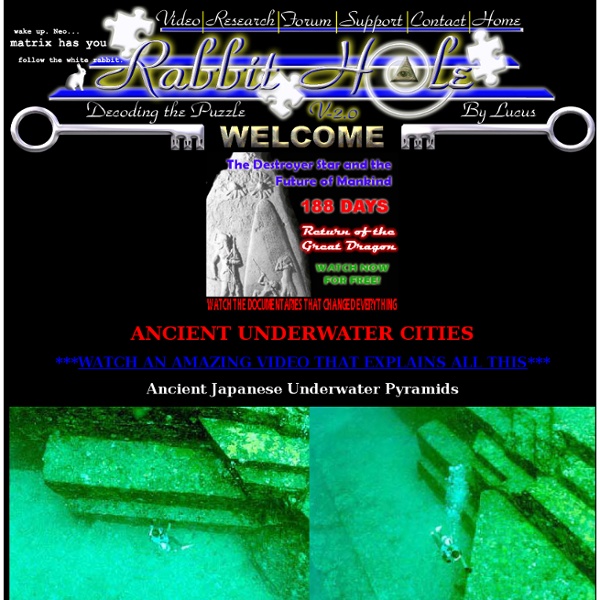 Lost city 'could rewrite history' By BBC News Online's Tom Housden The remains of what has been described as a huge lost city may force historians and archaeologists to radically reconsider their view of ancient human history. Marine scientists say archaeological remains discovered 36 meters (120 feet) underwater in the Gulf of Cambay off the western coast of India could be over 9,000 years old. The vast city - which is five miles long and two miles wide - is believed to predate the oldest known remains in the subcontinent by more than 5,000 years. The site was discovered by chance last year by oceanographers from India's National Institute of Ocean Technology conducting a survey of pollution. Using sidescan sonar - which sends a beam of sound waves down to the bottom of the ocean they identified huge geometrical structures at a depth of 120ft. Lost civilization The city is believed to be even older than the ancient Harappan civilization, which dates back around 4,000 years. Continued...

Atlantis or Someone Else? The report is about an Earth based scenario, a combination of the possibilities inherent in a background Earth story, some possible hypotheses by me, and then some visual evidence to add into the mix. It will be up to you to decide if there is any merit. First we'll start with the background story. In more modern times, the story of ancient Atlantis has fascinated generations and some to obsession as a real place. As many of you may know, it is acknowledged that the story of Atlantis was first introduced into public awareness via dialogues by the Greek philosopher Plato around 355–360 BC. 6 Insane Coincidences You Won't Believe Actually Happened America's Freak Luck During the Battle of Midway The Battle of Midway may be remembered as one of the most spectacular naval battles in history and one of the huge turning points in the Pacific theater, but it started out as a pure clusterfuck for the Americans. Despite going into battle with most of Japan's game plan in their pocket thanks to American codebreakers/Bothan spies, the U.S. Navy had little to show for it in the early hours of June 4, 1942. Just about every aircraft that took on the Japanese that day was destroyed, and all without delivering any serious damage.

15 Fascinating Facts About Ancient Egypt History Ever since my childhood I have been fascinated with all things relating to Ancient Egypt. I have tried for a long time to come up with a good idea for a list relating to it and this is the first (of what I hope will be many!) These facts should serve as a good introduction to Ancient Egyptian culture and society – and hopefully many will be things you did not know. 1.

Lost World under the North Sea It also serves as a warning for the scale of impact that climate change can cause, Professor Gaffney says. Human communities would have lost their homelands as the rising water began to encroach upon the wide, low-lying plains. "At times this change would have been insidious and slow - but at times, it could have been terrifyingly fast.

Top 10 Myths About the Romans History For many, the only exposure to Ancient Rome comes from what they have seen in the movies or on television. Unfortunately, films like Gladiator, Spartacus, Barabbas, and Demetrius and the Gladiators don’t present a very accurate depiction of life in Rome and the arena. Considering the fact that the Roman Empire existed for so long, and so much of our own Western society has derived from it, it is no surprise that we all have at least one or two misconceptions about the Empire and its people. For this reason, we have put together a list of the most misconceptions people hold about the Ancient Roman society and customs.

Neptune and Uranus May Have Oceans of Liquid Diamond Future humans won't have to wait to travel to Pandora for the chance to mine unobtanium, because Neptune and Uranus may have diamond icebergs floating atop liquid diamond seas closer to home. The surprise finding comes from the first detailed measurements of the melting point of diamond, Discovery News reports. Scientists zapped diamond with a laser at pressures 40 million times greater than the Earth's atmosphere at sea level, and then slowly reduced both temperature and pressure. They eventually found that diamond behaves like water during freezing and melting, and that chunks of diamond will float in the liquid diamond. Diamond oceans could explain why the magnetic fields of Uranus and Neptune appear tilted so far off their north-south axes, given that they could deflect or tilt the magnetic fields. Both planets may consist of up to 10 percent carbon, the elemental building block of diamond.

Archaeologists unearth 5,000-year-old 'third-gender' caveman Archaeologists investigating a 5,000-year-old Copper Age grave in the Czech Republic believe they may have unearthed the first known remains of a gay or transvestite caveman, reports the Telegraph. The man was apparently buried as if he were a woman, an aberrant practice for an ancient culture known for its strict burial procedures. Since the grave dates to between 2900 and 2500 BC, the man would have been a member of the Corded Ware culture, a late Stone Age and Copper Age people named after the unique kind of pottery they produced. Men in this culture were traditionally buried lying on their right side with their heads pointing west, but this man was instead buried on his left side with his head pointing east, which is how women were typically buried.