The Greenbrier Ghost. Oak Island Nova Scotia Money Pit. A young man named Daniel McGinnis, 16, was exploring the island in 1795 and stumbled upon a strange depression in the sod beneath some oak trees. 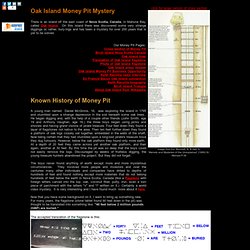 He began digging and, with the help of a couple other friends (John Smith, age 19 and Anthony Vaughan, age 16,) the three boys began using picks and shovels and having grand visions of pirate treasure. Four feet down they found a layer of flagstones not native to the area. Then ten feet further down they found a platform of oak logs closely set together, embedded in the walls of the shaft.

Now being certain that they had stumbled upon a long-lost pirate's treasure trove they dug furiously. However, below the oak platform they found only more earth. The boys never found anything of worth except more and more mysterious circumstances. Now that you have some background on it, I want to bring up something new. Mountain of the Dead: The Dyatlov Pass Incident.

One of the most bizarre, not to mention flat out terrifying, mysteries of the modern age concerns the enigmatic deaths of nine Russian mountaineers whose cross-country skiing trip ended in a tragedy so ghastly and perplexing that it has mystified experts for over half a century. 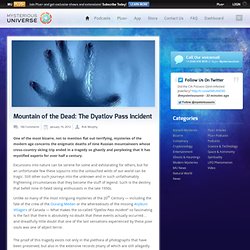 Excursions into nature can be serene for some and exhilarating for others, but for an unfortunate few these sojourns into the untouched wilds of our world can be tragic. Still other such journeys into the unknown end in such unfathomably frightening circumstances that they become the stuff of legend. Such is the destiny that befell nine ill-fated skiing enthusiasts in the late 1950s. But, before we go any further; like any good mystery we must begin at the beginning… Yudin hugged his comrades goodbye and with envy watched them leave… scarcely could he imagine at the time that he would the lucky one.

“If I had a chance to ask God just one question, it would be, ‘What really happened to my friends that night?’” 10 Men Who Claim to Have Traveled Through Time. Space travel is so played out. 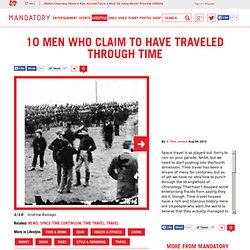 Sorry to rain on your parade, NASA, but we need to start pushing into the fourth dimension. Time travel has been a dream of many for centuries, but as of yet we have no idea how to punch through the stranglehold of chronology. That hasn’t stopped some enterprising frauds from saying they did it, though. Time-travel hoaxes have a rich and hilarious history. Here are 10 people who want the world to believe that they actually managed to travel through time. Andrew Basiago One of the most common time travel theories is that the United States government has been trying to pull it off for a long time under a number of black ops programs. 10 of the Greatest Unsolved Mysteries. The last hundred years have borne witness to humankind’s extraordinary technological advancements. 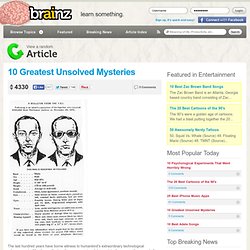 Man has walked on the moon, ventured deeper into the oceans than ever before and even uncovered the building blocks of life, DNA. But even with our inexorable progress as a species there are still mysteries and enigmas the solutions to which elude us. Below is a selection of 10 of the most puzzling mysteries in history. 10) The SS Ourang Medan In June 1947, a chilling SOS message was picked up: “All officers including captain are dead lying in chartroom and bridge. Mind Trick? Have you ever wondered if your mind is normal? 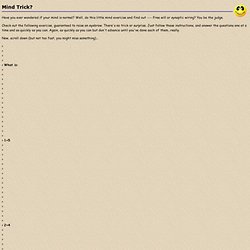 Well, do this little mind exercise and find out ---- Free will or synaptic wiring? You be the judge. Check out the following exercise, guaranteed to raise an eyebrow. There's no trick or surprise. Just follow these instructions, and answer the questions one at a time and as quickly as you can. Now, scroll down (but not too fast, you might miss something)...

The Monkey's Paw - Castle of Spirits.com. WITHOUT, the night was cold and wet, but in the small parlor of Lakesnam Villa the blinds were drawn and the fire burned brightly. 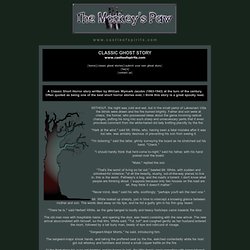 Father and son were at chess, the former, who possessed ideas about the game involving radical changes, putting his king into such sharp and unnecessary perils that it even provoked comment from the white-haired old lady knitting placidly by the fire. "Hark at the wind," said Mr. White, who, having seen a fatal mistake after it was too late, was amiably desirous of preventing his son from seeing it. "I'm listening," said the latter, grimly surveying the board as he stretched out his hand. "Check. " "I should hardly think that he'd come to-night," said his father, with his hand poised over the board. "Mate," replied the son. "That's the worst of living so far out," bawled Mr. "Never mind, dear," said his wife, soothingly; "perhaps you'll win the next one. " Mr. "There he is," said Herbert White, as the gate banged to loudly and heavy footsteps came towards the door. 10 Creepy Mysteries You Haven’t Heard Of.