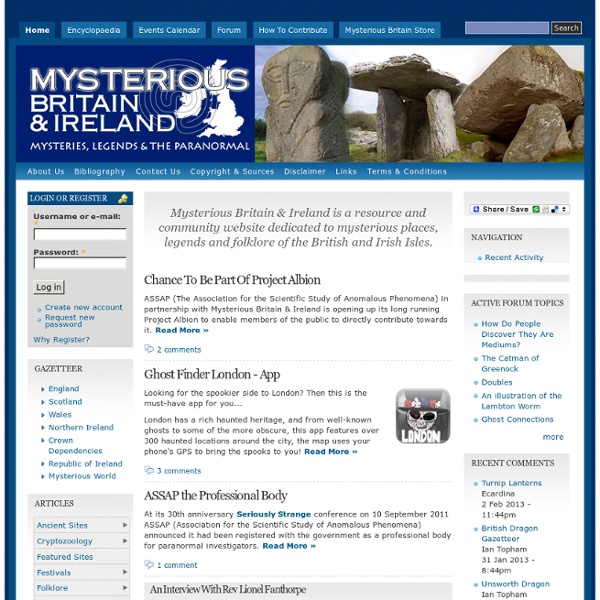 The List Blog - StumbleUpon 10. Why are dogs committing suicide by jumpingoff the Overtoun Bridge? The Overtoun Bridge is an arch bridge located near Milton, Scotland, overthe Overtoun Burn. A burn is a term used to describe a type of streamwhich is smaller than a river. Milton is a village in West Dunbartonshire,which is just on the outskirts of Dumbarton. The long leap from the bridge onto the waterfalls of the Overtoun Estatealmost always results in immediate death. There have been a number of theories as to why dogs are choosing to endtheir lives by jumping off the bridge, ranging from the bridge being hauntedto the canines suffering from depression, or even picking up depressed orsuicidal feelings from the bridge. It has been suggested that the height of the bridge’s granite walls significantlyimpairs the dogs’ sense of sight and hearing, so when they go to investigatethe smell, they are unaware of the massive fall that awaits them. 9. 8. 7. 6. 5. 4. In 1940, Willard F.M. 3. 2. 1. Moonlight Maze

Girl Who Does Not Age, Brooke Greenberg Baffles Doctors <br/><a href=" US News</a> | <a href=" Business News</a> Copy Brooke Greenberg is the size of an infant, with the mental capacity of a toddler. She turned 16 in January. "Why doesn't she age?" Howard Greenberg, 52, asked of his daughter. Such questions are why scientists are fascinated by Brooke. Girl Who Doesn't Grow Baffles Doctors "Many of the best-known names in medicine, in their experience ... had not seen anyone who matched up to Brooke," Pakula said. Brooke hasn't aged in the conventional sense. null In a recent paper for the journal "Mechanisms of Ageing and Development," Walker and his co-authors, who include Pakula and All Children's Hospital (St. "There've been very minimal changes in Brooke's brain," Walker said. Brooke's mother, Melanie Greenberg, 48, sees a different picture. "My system always has been to turn years into months," Greenberg said. Brooke weighs 16 pounds and is 30 inches tall.

Earth Hour Eighth wonder of the world? The stunning temples secretly carved out below ground by 'paranormal' eccentric Nestling in the foothills of the Alps in northern Italy, 30 miles from the ancient city of Turin, lies the valley of Valchiusella. Peppered with medieval villages, the hillside scenery is certainly picturesque. But it is deep underground, buried into the ancient rock, that the region's greatest wonders are concealed. Scroll down for more... Here, 100ft down and hidden from public view, lies an astonishing secret - one that has drawn comparisons with the fabled city of Atlantis and has been dubbed 'the Eighth Wonder of the World' by the Italian government. For weaving their way underneath the hillside are nine ornate temples, on five levels, whose scale and opulence take the breath away. Constructed like a three-dimensional book, narrating the history of humanity, they are linked by hundreds of metres of richly decorated tunnels and occupy almost 300,000 cubic feet - Big Ben is 15,000 cubic feet. Few have been granted permission to see these marvels.

UNEXPLAINED PHENOMENA - The Alternative Top Ten Over the past decades the designs have become increasingly complex and still remain a mystery as to their origin. Clearly some of the formations are man-made but experts are quick to point out that it is fairly easy to identify these as their construction is often very basic and there is usually evidence of human activity ranging from footprints to vehicle tracks. However, a great many of the formations simply seem to appear as if from out of nowhere - often during the night but occasionally during broad daylight. Crop circles in Wiltshire often appear at the centre of the county and within a 15 mile radius of the megalithic stone circles of Avebury. They tend to materialise from late April and continue to manifest throughout the summer months of June, July and August. Mainstream science is generally of the opinion that crop formations are the work of human artists with a few formations being caused by whirlwinds.

Visible Only From Above, Mystifying 'Nazca Lines' Discovered In Mideast The giant stone structures form wheel shapes with spokes often radiating inside. Here a cluster of wheels in the Azraq Oasis.David D. Boyer They stretch from Syria to Saudi Arabia, can be seen from the air but not the ground, and are virtually unknown to the public. They are the Middle East's own version of the Nazca Lines — ancient "geolyphs," or drawings, that span deserts in southern Peru — and now, thanks to new satellite-mapping technologies, and an aerial photography program in Jordan, researchers are discovering more of them than ever before. They number well into the thousands. Referred to by archaeologists as "wheels," these stone structures have a wide variety of designs, with a common one being a circle with spokes radiating inside. Kennedy's new research, which will be published in a forthcoming issue of the Journal of Archaeological Science, reveals that these wheels form part of a variety of stone landscapes. Fascinating structures Indeed, in 1927 RAF Flight Lt.

10 Bizarre Theories And The Facts Surrounding Them Weird Stuff Previously we posted a list on conspiracy theories, but the items on this list are not really suited to that genre. This is a list of bizarre theories or beliefs that many people subscribe to – with a list of the facts as far as modern science is concerned. This is not meant as a criticism of believers, but as a discussion of the theories and facts. The Theory: The theory is by using certain objects such as a candle, a dagger and a wide variety of things you can bend the universe to your will completely ignoring the laws of physics and the practical laws of the universe. The facts: Many people claim that they can use such powers as summoning demons, angels or other things and the OOBE or out of body experience under laboratory conditions but no one has been able to prove it so far. The Theory: This has to be one of the most outlandish theories ever brought forth, it is claimed most famously by David Icke but as well by several others. Contributor: Beranabus, Editor: Cyn

Ancient Mysteries - Puma Punku in Tiahuanaco The simple answer; we have absolutely no idea who did all this, or even how they could have done it. There have been a few suggestions, but as you could imagine, they are widely criticized for the most part. One suggestion has been made that there had to have been some kind of ancient aliens who interceded on humanity's behalf, and our ancestors learned how to do all of this from them. There are actual records of mythical origin, regarding gods and the part that they took in the creation of these places. Another suggestion, is that a cataclysmic event such as a flood, wiped out these ancient peoples along with any records they may have kept. These may be stretches of the imagination, but places like Puma Punku were constructed somehow, and if it would be very difficult for us today to build a place like Puma Punku, then how did these ancient people accomplish it? Did they have advanced technology similar to ours, and then die off? To this day, it remains an ancient mystery.

Tanganyika laughter epidemic The Tanganyika laughter epidemic of 1962 was an outbreak of mass hysteria – or mass psychogenic illness (MPI) – rumored to have occurred in or near the village of Kashasha on the western coast of Lake Victoria in the modern nation of Tanzania (formerly Tanganyika) near the border of Kenya.[1] The laughter epidemic began on January 30, 1962, at a mission-run boarding school for girls in Kashasha. The laughter started with three girls and spread haphazardly throughout the school, affecting 95 of the 159 pupils, aged 12–18.[2][3] Symptoms lasted from a few hours to 16 days in those affected. The teaching staff were not affected but reported that students were unable to concentrate on their lessons. The school was forced to close down on March 18, 1962.[4] The school from which the epidemic sprang was sued; the children and parents transmitted it to the surrounding area. See also[edit] References[edit] Jump up ^ Jeffries, Stuart (November 21, 2007). External links[edit]

History's Most Overlooked Mysteries Tuan C. Nguyen | July 25, 2007 10:23am ET Credit: Photographed by Aurel Stein, circa 1910 Although many of life's great mysteries remain unsolved, there are some lesser known ones that also have stumped researchers for centuries. 10 More Mysterious Conspiracy Theories - StumbleUpon Mysteries To date we have around seven conspiracy theory lists or lists containing entries related to such. This new list is a welcome addition as it has been some time since our last one and they are always extremely fascinating topics to read about. The world is full of conspiracy theories – many of which contain elements of mystery. This will definitely not be the last list of this type. Theories surrounding the Ararat Anomaly arose from a single black and white photograph taken in 1949 by a USAF recon plane performing routine intelligence gathering of the Ararat massif, which was in an area of military interest at the time. Conspiracy theorists, many of them Biblical literalists, claim that the odd-looking object if Noah’s Ark, which the Bible states “came to rest on the mountains of Ararat” after the Great Flood. The anomaly appears to be a very rounded elongation teetering on the edge of a slope, buried under ice and snow, and it has so roused the curiosity of the U.