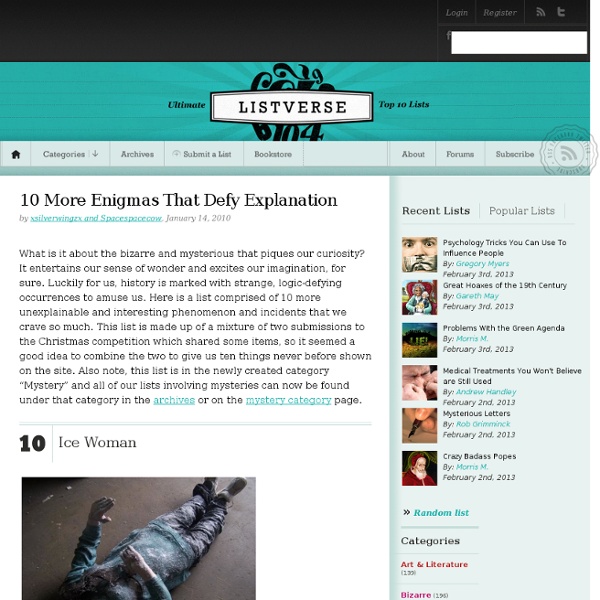 Mysteries What is it about the bizarre and mysterious that piques our curiosity? It entertains our sense of wonder and excites our imagination, for sure. Luckily for us, history is marked with strange, logic-defying occurrences to amuse us. Here is a list comprised of 10 more unexplainable and interesting phenomenon and incidents that we crave so much. This list is made up of a mixture of two submissions to the Christmas competition which shared some items, so it seemed a good idea to combine the two to give us ten things never before shown on the site. Nature performs many astonishing feats, yet it is a different matter altogether when we human beings push past the boundaries of normal. The hospital staff did everything possible, yet the situation was dire. Iron, the king of metal, is used for just about everything from the skeleton of your house to the chains on your bike. Is it just me or doest that stain on the wall look like a person staring at you? Jamie Frater

The Solway Firth Photo, 1964,(Spaceman) UFO Casebook Files On 24th May 1964, Jim Templeton, a fireman from Carlisle in the North of England, took his young daughter out to the marches overlooking the Solway Firth to take some photographs. Nothing untoward happened, although both he and his wife noticed an unusual aura in the atmosphere. There was a kind of electric charge in the air, though no storm came.

Why the mantis shrimp is awesome. They all look the same to me SCORE 109 That escalated quickly SCORE 111 Weird Al Magic Trick SCORE 116 The amazing floats of the Bloemencorso in Zundert, Netherlands (37 Photos) : Follow Dougy on Tapiture The Bloemencorsois the largest flower parade in the world. The parade takes place on the first Sunday of September.

The Egg The Egg By: Andy Weir You were on your way home when you died. Verbal Vomit: How to be a Hipster, Chapter 1 Hipster is a slang term that first appeared in the 1940s, and was revived in the 1990's and 2000's to describe types of young, recently settled urban middle class adults and older teenagers with interests in non-mainstream fashion and culture, particularly indie-rock, independent film, magazines such as Vice and Clash, and websites like Pitchfork Media.[1] In some contexts, hipsters are also referred to as scenesters. Do you want to be a Hipster? Do you wish you could join those sparkling beautiful people that you see pedaling past your house? Well, throw your TV's away, buy yourself a sturdy canvas bag, talk about joining the Peace Corp and read this short guide on becoming what you've always dreamed of: A Hipster.

A Modern Pop-Up Children's Storybook That Uses Augmented Reality Australia-based Resin is a company that has recently developed a modern pop-up book using augmented reality. By taking an existing storybook, “Two Left Feet”, they have brought it to life using 3D animation and augmented reality. To experience the fun, one does not need to own the storybook.You are also able to print out images to experience the same augmented reality. The app recognizes artwork from the book and brings it to life with beautiful moving animations. It is not reliant on reading QR codes. It also works with all the features for people without the book and is narrated so children who cannot read can experience the story on their own.

Amazing 3D Drawings Fredo’s artwork looks like it comes to life from a piece of paper. It is outstanding! See also: “Pencil Art: Turn on the Light.” Photos © Fredo Link via Bored Panda Girl, 3, feet won't stop growing due to mystery condition Little Yu Yu is forced to go barefoot as her poverty-stricken family are unable to afford shoes big enough for her Shuffling along the road, holding tightly onto her grandmother’s hand, every step three-year-old Yu Yu takes is painful. The toddler suffers from an undiagnosed condition which causes her feet to grow at an alarmingly rapid rate.

How One Teacher Turned Sixth Grade Into An MMO Editor’s Note: Ben Bertoli is a long-time Kotaku reader and commenter, a lifetime, dedicated video gamer and a sixth-grade teacher in Indiana. He reached out to Kotaku this past week to share the story of how he turned his class into a role-playing game. The enthusiasm and motivation of the children in Bertoli’s class evoke the success stories seen in gamified experiences such as Fitocracy. Here, Bertoli explains his creation, ClassRealm, how it works and what motivated him to develop it. 30 Most Ridiculous Doodles on Draw Something Draw Something is a mobile app developed by Omgpop. It was one of the Mobile apps which won the Flurry App Spotlight Awards in 2012. In the first five weeks after its launching, the game was downloaded 20 million times.

Dyatlov Pass incident The Dyatlov Pass incident (Russian: Гибель тургруппы Дятлова) is the mysterious deaths of nine ski hikers in the northern Ural Mountains on February 2, 1959. The experienced trekking group, who were all from the Ural Polytechnical Institute, had established a camp on the slopes of Kholat Syakhl when disaster struck. During the night something made them tear their way out of their tents from the inside and flee the campsite inadequately dressed in heavy snowfall and sub-zero temperatures. Soviet investigators determined that six victims died from hypothermia but others showed signs of physical trauma. One victim had a fractured skull while another had brain damage but without any sign of distress to their skull.

World’s First Perpetual Motion Machine? Can this machine operate forever? Since at least the 12th century, man has sought to create a perpetual motion machine; a device that would continue working indefinitely without any external source of energy. A large scientific contingent thinks such a device would violate the laws of thermodynamics, and is thus impossible.