The Killshot. Santos Bonacci Nothing New Under the Sun & Sun Symbolism. 10 Mysterious Photos That Cannot Be Explained. 09 San Francisco - Secrets in Plain Sight. Number 9 Code. Nibiru Will Pass Earth Before November 2017, The Evidence, Invesigator David Meade version#19. Planet X Nibiru Gets Closer -Years of Chaos to Come as U S and Russia Make Preparations. The mystery behind the ancient Tibetan Carved Skull! Untitled. A burial slab believed to have held the body of Jesus Christ before he was resurrected has been uncovered for the first time in centuries by a restoration team in Jerusalem. 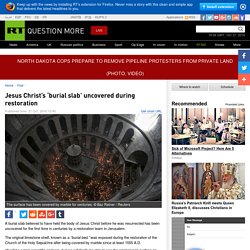 The original limestone shelf, known as a “burial bed,” was exposed during the restoration of the Church of the Holy Sepulchre after being covered by marble since at least 1555 A.D. “It will be a long scientific analysis, but we will finally be able to see the original rock surface on which, according to tradition, the body of Christ was laid,” Fredrik Hiebert, an archaeologist involved in the discovery, told National Geographic. READ MORE: Glenn Beck: Mel Gibson told me ‘Jewish people’ stole his ‘Passion of the Christ’ According to scripture, Jesus Christ was laid on the shelf in the tomb after dying at the crucifixion around 33 A.D. After three days his remains were discovered to be missing and Jesus was said to have appeared over a span of 40 days before ascending into heaven.

PLANET X (NIBIRU) 2016 Officially confirmed in mainstream news - NASA cover-up? Researchers Discover a 2 Billion Year Old Nuclear Reactor in Africa! Scientists have found a woman whose eyes have a whole new type of colour receptor. After more than 25 years of searching, neuroscientists in the UK recently announced that they've discovered a woman who has an extra type of cone cell - the receptor cells that detect colour - in her eyes. 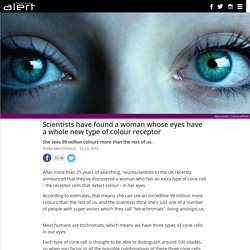 According to estimates, that means she can see an incredible 99 million more colours than the rest of us, and the scientists think she's just one of a number of people with super-vision, which they call "tetrachromats", living amongst us. Most humans are trichromats, which means we have three types of cone cells in our eyes. Each type of cone cell is thought to be able to distinguish around 100 shades, so when you factor in all the possible combinations of these three cone cells combined, it means we can distinguish around 1 million different colours. Most people who are colour blind only have two functioning types of cone cells, which is why they can only see around 10,000 shades - and almost all other mammals, including dogs and New World monkeys, are also dichromats. Noticias ao Minuto - Descoberto 'telescópio' com seis mil anos em Portugal. 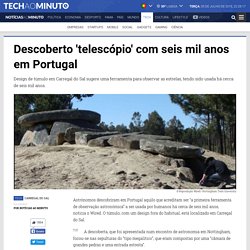 “A orientação do túmulo pode estar alinhada com Aldebaran, a estrela mais brilhante da constelação de Touro”, diz Fábio Silva, que trabalhou no projeto, citado pela publicação. Star pupil finds lost Mayan city by studying ancient charts of the night sky from his bedroom. 1200 Years Old Hindu Temple Carved From a Single Rock. Kailasa temple is 1200 year old Ancient Hindu Temple Carved from a single rock in Ellora stands majestically 29 kilometers away from the City of Aurangabad in the state of Maharashtra, India and which is part of a set of 34 temples and monasteries renowned as the Ellora Caves. 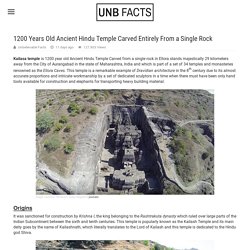 This temple is a remarkable example of Dravidian architecture in the 8th century due to its almost accurate proportions and intricate workmanship by a set of dedicated sculptors in a time when there must have been only hand tools available for construction and elephants for transporting heavy building material. Origins It was sanctioned for construction by Krishna I, the king belonging to the Rashtrakuta dynasty which ruled over large parts of the Indian Subcontinent between the sixth and tenth centuries.