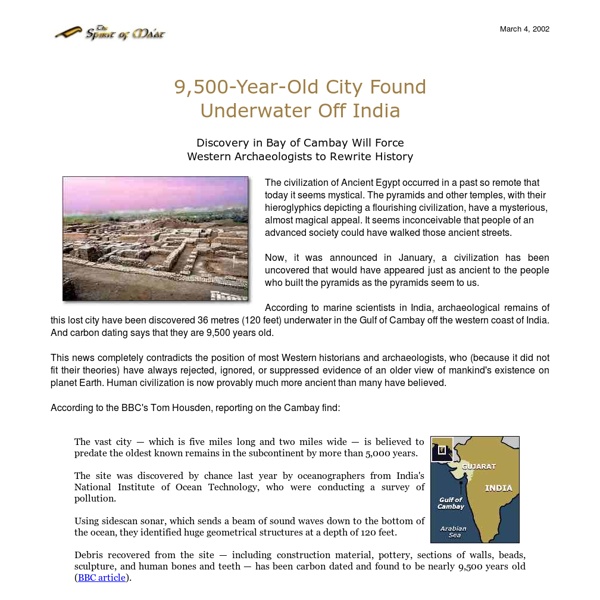 Now, it was announced in January, a civilization has been uncovered that would have appeared just as ancient to the people who built the pyramids as the pyramids seem to us. According to marine scientists in India, archaeological remains of this lost city have been discovered 36 metres (120 feet) underwater in the Gulf of Cambay off the western coast of India. And carbon dating says that they are 9,500 years old. This news completely contradicts the position of most Western historians and archaeologists, who (because it did not fit their theories) have always rejected, ignored, or suppressed evidence of an older view of mankind's existence on planet Earth. Human civilization is now provably much more ancient than many have believed. According to the BBC's Tom Housden, reporting on the Cambay find: Several reports confirm this estimate. Unheard-of Scope of Cambay Ruins The BBC article tells us that the remains of this ancient city stand upon "enormous foundations." According to Howe:

10 Civilizations That Mysteriously Disappeared Throughout our history, most civilizations have either met a slow demise or were wiped out by sudden natural disasters or invasion. But there are a few societies whose disappearance has scholars truly stumped: 10. The Olmec One of the first Mesoamerican societies, the Olmec inhabited the tropical lowlands of south-central Mexico. Where did they go? 9. The Nabateans were a Semitic culture that inhabited parts of Jordan, Canaan and Arabia from around the sixth century BC. 8. The Aksumite Empire began in the first century AD in what is now Ethiopia and is believed to be the home of the Queen of Sheba. 7.The Mycenaeans Growing out of the Minoan civilization, the Myceanaeans merged around 1600 BC in southern Greece. 6. The Khmer Empire grew out of the kingdom of Chenla in what is now Cambodia around the 9th century AD and became one of the most powerful empires in Southeast Asia. 5. 4. A prehistoric Native American people, the Clovis culture dates back to 10,000 BC. 3. 2.The Anasazi 1.

Conspiracy | Documentary Heaven :: Food For Your Brain | Free On (Banned Discovery Channel Documentary) "Conspiracy of Silence" is a powerful, disturbing documentary revealing a nationwide child abuse and pedophilia ring that leads to the highest levels of government. Featuring intrepid investigator John DeCamp, a highly decorated Vietnam war veteran and 16-year Nebraska state senator, "Conspiracy of Silence" reveals how rogue elements at all levels of government have been involved in systematic child abuse and pedophilia to feed the base desires of key... The grim future foretold in 1984 has become reality. The United States is now recognized globally as one of the most oppressive police states on earth. What In The World Are They Spraying? Meet The Truth 2 Year Anniversary Show. The documentary, first broadcast on HBO throughout November & December 2006, exposes the dangers of voting machines used during America's mid term and presidential elections. Broadcast 14 November 2006. What is Your Line In The Sand?

Earliest Complete Human Figurine Unearthed On Cyprus Get our top stories Follow MessageToEagle.com Subscribe in a reader Other Popular Articles Sirius Mystery by Robert Temple - Book Review A spaceship arrived from the sky and landed with a great noise and wind, on three legs. "After the landing, something with four legs appeared and dragged the vessel to a hollow, which filled with water until the vessel floated in it," according to the Dogon legend that has been passed through generations. Millennia Old Stone Faces Of Unknown Origin: Who Carved Them And For What Purpose? Strange faces and heads carved in stones have been discovered worldwide. Thousands Unknown Ancient StructuresSeen From Space: Puzzling Aerial Archeology In The Middle East Thousands of huge ancient structures made of stone are clearly visible from the air. Elusive Underwater Object Still A Great Puzzle - Divers Say They Felt Frightened The Swedish news agency Rapport is offering new unique images of the mysterious underwater object that many refer to as the "Baltic UFO".

Scientist Creates Cold Fusion For the First Time In Decades | Gi Cold fusion, the act of producing a nuclear reaction at room temperature, has long been relegated to science fiction after researchers were unable to recreate the experiment that first “discovered” the phenomenon. But a Japanese scientist was supposedly able to start a cold fusion reaction earlier this week, which—if the results are real—could revolutionise the way we gather energy. Yoshiaki Arata, a highly respected physicist in Japan, demonstrated a low-energy nuclear reaction at Osaka University on Thursday. In front of a live audience, including reporters from six major newspapers and two tv studios, Arata and a co-professor Yue-Chang Zhang, produced excess heat and helium atoms from deuterium gas. Arata used pressure to force deuterium gas into an evacuated cell that contained a palladium and zirconium oxide mix(ZrO2-Pd). Arata said that the mix caused the deuterium’s nuclei to fuse, raising the temperature in the cell and keeping the centre of the cell warm for 50 hours.

Two Stone Age 9,500-Year-Old Artifacts Unearthed MessageToEagle.com - Archaeologists have unearthed two Stone Age figurines – c. 9,500 year old – in Tel Motza located between Jerusalem and Tel Aviv. The ancient figurines, found in excavations prior to widening Highway 1 in the area, depict a ram and a wild pig or buffalo. The ram, made from limestone, has intricately carved horns and is about 15 centimeters. The second figurine is more abstract and depicts a large animal with prominent horns that could be a bovine or buffalo. A rare early neolithic ram figurine. Image credit: Yael Yolovitch, courtesy of the Israel Antiquities Authority Anna Eirikh, the other co-director of the dig, believes that the figurines are linked to the process of animal domestication, as the inhabitants began to build complex societies and agricultural villages. Wild bovine. However, according to another theory, the figurines were used as talismans. Original source: - here MessageToEagle.com

The Mysterious Plain of Jars Often referred to as â€œan Asian version of Stonehengeâ€, the Plain of Jars is one of the most enigmatic sights on Earth. Shrouded in mystery and myth, this ancient place has fascinated archeologists and scientists ever since its discovery. [Photo Credits] Thousands of giant stone jars scattered around the Xieng Khouang plain, in Laos form one of the most bizarre archeological collections in history. Although it has been determined they are over 2000 years old, no one has yet been able to determine who built them and for what purpose. Made of sedimentary rock, like sandstone or granite, and calcified coral, the jars weigh up to 13 tons and are between 1 and 3 meters high. [Photo Credits] More than 400 sites have been discovered around the Plain of Jars, but only three of them have been opened to the public. [Photo Credits] But if you ask the locals, theyâ€™ll tell you of an old race of giants who once lived in these lands.

Ten Mysterious Examples of Rock Art from the Ancient World Rock paintings and engravings are among the world’s oldest continuously practiced art form and are as diverse as the wide-ranging cultures and civilizations that have produced them. Depictions of elegant human figures, richly hued animals, unusual figures combining human and animal features, and detailed geometric patterns, continue to inspire admiration for their sophistication, powerful forms, and detailed representations, as well as for providing a window into the daily lives of our ancient ancestors. Here we feature some of the most amazing and mysterious examples of rock art from around the world, though there are thousands more that are equally as impressive. 10. The sandstone cliffs of Sego Canyon are a spectacular outdoor art gallery of petroglyphs painted and carved by Native Americans peoples over a period of around 8,000 years. Evidence of human habitation in Sego Canyon dates back to the Archaic Period (6,000 – 100 BC). 9. 8.

Mermaids are real, says the National Oceanic and Atmospheric Administration | Mission Galactic Freedom Hmm Donno if its True, but when the Govt says it does not exist?? You can seriously Question and think otherwise… And the kenyan article is also missing…. ~ Galactic human ~ Apparently the National Oceanic and Atmospheric Administration (NOAA) published a newsfeed article titled Conclusive Evidence of the Existence of Aquatic Humanoids. I don’t know if I’m fully convinced of the cliche image of a magical, seductive girl rooming the ocean half-naked. Published on Feb 1, 2015 The belief in mermaids may have arisen at the very dawn of our species. Recommended Videos: Mermaids Caught on Tape – Amazing Footage! Mermaids Caught on Tape – Part 2 HD: Published on Aug 31, 2014 The Mermaid has always been part of Legends and Myth’s.. but after two very interesting Documentaries on channels like National Geographic.. the debate was on. Also watch Part 2: Source Like this: Like Loading...

The Fascinating Link Between The Pyramids And Other Worldly Visitors The pyramids are one of earth’s most fascinating standing structures -or at least to me they are. There have been many theories discussed as to how they were built, who built them and even why they were built. Ever since I was a kid I had been looking into each question surrounding the pyramids and in the end I felt that they were created by something “not of this world.” I came across this analysis of the pyramids and thought it was pretty extensive. Check it out and be the judge for yourself. “According to the accepted version of history, the three massive Pyramids on the Giza Plateau in Egypt were built by armies of Hebrew slaves for the glory of the Pharaohs of Egypt. The Pyramids are supposed to be monuments to the Pharaohs, tombs to preserve the royal bodies for a continued existence in the afterlife, and yet no bodies have ever been found inside them. 1. 2. 3. 4. 5. 6. 7. 8. 9. 10. 11. What can we deduce from these facts? B – Other numbers are also repeated throughout.

Robot Bear Rampage Felt like drawing with a dry erase marker today. Here is a gigantic robot bear rampaging through a city. "Robot Bear Rampage" - dry erase marker on paper - 18" x 13" All work © Lawrence Yang 2009 my blog | my site | purchase inquries Great Pyramid - Secret Tunnels of Giza Plateau Secret Tunnels of the Giza Plateau Boris Said Interviewed By Kenneth and Dee Burke Boris Said is the Emmy award-winning writer and producer of the NBC-TV feature documentary, "The Mystery of the Sphinx", hosted by Charlton Heston, which focused on the research of John Anthony West, alleging that the "water weathering" on the Sphinx indicates that it is much older than previously believed. Boris also produced the documentary "Secret Chamber", about the opening of the room under the Sphinx which was located during the "Mystery of the Sphinx", research. Before becoming a well-known film documentarian, Boris was a champion auto racer and the driver of the U.S. Bobsled Team for 3 Olympics. LE: Our readership will be interested in the kind of presentation of your material that you are planning to give at the February Global Sciences Congress in Florida. I have been filming over there since 1991. I don't believe that there are conspiracies. LE: So your focus in Egypt is what? Boris: Yes.