Do these mysterious stones mark the site of the Garden of Eden? 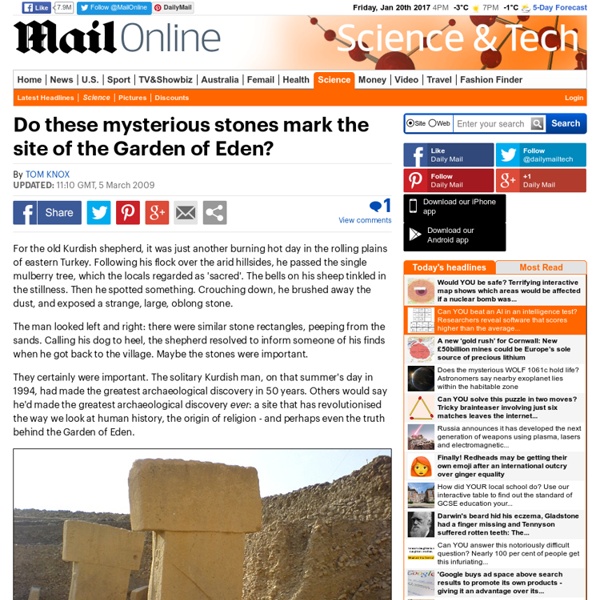 By Tom Knox Updated: 11:10 GMT, 5 March 2009 For the old Kurdish shepherd, it was just another burning hot day in the rolling plains of eastern Turkey. Following his flock over the arid hillsides, he passed the single mulberry tree, which the locals regarded as 'sacred'. The bells on his sheep tinkled in the stillness. Then he spotted something. The man looked left and right: there were similar stone rectangles, peeping from the sands. They certainly were important. The site has been described as 'extraordinary' and 'the most important' site in the world A few weeks after his discovery, news of the shepherd's find reached museum curators in the ancient city of Sanliurfa, ten miles south-west of the stones. They got in touch with the German Archaeological Institute in Istanbul. As he puts it: 'As soon as I got there and saw the stones, I knew that if I didn't walk away immediately I would be here for the rest of my life.' Schmidt stayed. So far, so remarkable. And so, paradise was lost.

Deadly time vortex appears over Antarctica Sector of erupting anomalies. Disturbing news has been leaking out from the giant continent at the bottom of the world. Some scientists manning lonely outposts under the drifting and shifting aurora are nearly paralyzed with fear. Russian researchers posted near the giant South Pole sub-glacial Lake Vostok have reported eerie anomalies and incidents over the past few years that sometimes seem to border on the frayed edge of creeping madness. Artificial structure found under two miles of ice During April 2001 one of the world’s great secrets was revealed: an ancient structure or apparatus that lay encased miles under the hard Antarctic ice was detected by a roving spy satellite. Despite the news blackout, reports still surfaced that a secretive excavation project had commenced on the heels of the discovery. Excavation deep into the ice…What’s down there? The federal government and the Pentagon ignored the calls. High technology and strange events 2002: TV crew disappears Time vortex erupts

Aurora Borealis Activity Now. Everything You Need to know. By JIM THOMAS -- Soft Serve News Auroras are difficult to predict with precision. They have stops and starts (known as sub-storms). If you are out there, you need to be patient and lucky. Here are some tools that will increase your chances. Here is the prediction of storm intensity for the next few minutes (the higher the Kp number, the larger the Aurora): The Space Environment Center's Neural Net Program estimates that . . . in 15 minutes, the Geomagnetic Activity level (Kp number) will be 7 -- at STORM LEVEL! Why miss your Aurora? Now, find the Kp number line on one of the following maps that matches the Kp number predicted above. It's critical to get confirmation of activity with NOAA's Ovation map. It's a great sign if you see a thick aurora band with some areas of light yellow, orange or, better yet, RED on this map as opposed to just a thin (or transparent) band with only dark green. (Story continues below) Want free access to the Aurora three day forecast? Dark. Why?

Amazing Metropolis Discovered in Africa is 200,000 years old! By Dan Eden for viewzone. They have always been there. People noticed them before. But no one could remember who made them -- or why? Until just recently, no one even knew how many there were. Something amazing has been discovered in an area of South Africa, about 150 miles inland, west of the port of Maputo. The image [top of page] is a close-up view of just a few hundred meters of the landscape taken from google-earth. This changed when researcher and author, Michael Tellinger, teamed up with Johan Heine, a local fireman and pilot who had been looking at these ruins from his years flying over the region. "When Johan first introduced me to the ancient stone ruins of southern Africa, I had no idea of the incredible discoveries we would make in the year or two that followed. Where it was found The area is significant for one striking thing -- gold. Did gold play some role in the dense population that once lived here? The individual ruins [see below] mostly consist of stone circles.

Egyptian pyramids found by infra-red satellite images Seventeen lost pyramids are among the buildings identified in a new satellite survey of Egypt. More than 1,000 tombs and 3,000 ancient settlements were also revealed by looking at infra-red images which show up underground buildings. Initial excavations have already confirmed some of the findings, including two suspected pyramids. The work has been pioneered at the University of Alabama at Birmingham by US Egyptologist Dr Sarah Parcak. She says she was amazed at how much she and her team has found. "We were very intensely doing this research for over a year. "To excavate a pyramid is the dream of every archaeologist," she said. The team analysed images from satellites orbiting 700km above the earth, equipped with cameras so powerful they can pin-point objects less than 1m in diameter on the earth's surface. Infra-red imaging was used to highlight different materials under the surface. And she believes there are more antiquities to be discovered:

Wonder How To » How To Videos & How-To Articles Tiwanaku, Bolivia Tiwanaku In the holograms of reality, and the myths within, Tiwanaku is another ancient civilization whose timeline came and went, leaving behind megalithic monuments that go without explanation as to their mathematical design and construction. Considered by some the oldest city in the world, much of Tiwanaku's creation defies the laws of physics and mathematics even by today's standards. As with many other sacred sites throughout the planet Tiwanaku remains an enigma allowing researchers to speculate on its origins and purpose then parallel that with other ancient civilizations left behind by unknown beings surviving in time with great stone markers which bear clues to humanity's creation story. Tiwanaku was perhaps an ancient site where people came to worship their gods, or creators, giants who came here from the skies and in one day built Puma Punku (see below). Background - Back Story Tiwanaku is an important Pre-Columbian archaeological site in western Bolivia. Architecture

Article 61 of the Magna Carta Magna Carta Article 61 Preliminary. This was written from the point of view of the monarch at the time (King John), consequently "we" and "us", etc, refer to the monarch. Here is Article 61 in its entirety. All we need is "25 Barons" (who are decent and honest human beings). Note to debunkers, legal eagles, constitutional lawyers & other superior beings, etc: The Magna Carta was written in Mediaeval Latin and translated into English, and I am English. Furthermore the original (1215) Magna Carta pre-dates any 'parliament'. Article 61 But since we have granted all these things aforesaid, for GOD, and for the amendment of our kingdom, and for the better extinguishing the discord which has arisen between us and our Barons, we being desirous that these things should possess entire and unshaken stability for ever[1], give and grant to them the security underwritten[2]; End of Article 61. Notes. [1]. [2]. [3] Who elects the Barons in the first place? [4] Security entirely due to peace and liberties?