The Incredible Mystery Of Coral Castle 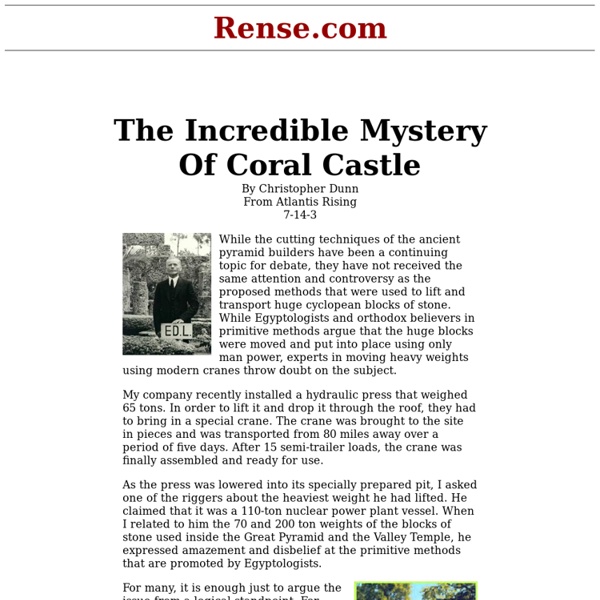 eisp Atlantis' legendary metal found in shipwreck -- Secret History -- Sott.net © Superintendent of the Sea Office, SicilyA team of divers recovered nearly 40 ingots off the sea floor near Sicily, from a ship that was lost in the sixth century. Gleaming cast metal called orichalcum, which was said by Ancient Greeks to be found in Atlantis, have been recovered from a shipwreck that sunk 2,600 years ago off the coast of Sicily. The lumps of metal were arriving to Gela in southern Sicily, possibly coming from Greece or Asia Minor. The ship that was carrying them was likely caught in a storm and sunk just when it was about to enter the port. "The wreck dates to the first half of the sixth century," Sebastiano Tusa, Sicily's superintendent of the Sea Office, told Discovery News. "It was found about 1,000 feet from Gela's coast at a depth of 10 feet." He noted that the 39 ingots found on the sandy sea floor represent a unique finding. "Nothing similar has ever been found," Tusa said.

Popes Tortured Thousands Of Women Burned Alive ~ Malleus Maleficarum -WHAT THEY DONT TEACH YOU IN SCHOOL | Strange (Before It's News) When I watched the movie “The Da Vinci Code” when Tom Hanks went to the English mansion, he was talking to the older man about history, and they showed this book below, then I spent hours and hours learning this… Such a horrible crime against women healers….You could make a lifetime study of it… I’m adding this post to Before Its News, as to many of you, it may be the first time you heard of it…. Women were the healers and the men that killed them were the Popes, while the government took over their land from fraud and lies. Why or why isnt this taught in schools? The European Witch Hunts The Malleus Maleficarum was the manual of how to torture women and burn them at the stakes during the middle ages; written by 3 Swiss – Heinrich Kramer, Jacobus Sprenger and Johannes Nider. It was a swiss idea, and started just after the founding of Switzerland by the Templars on august 1st in 1291. Further Reading: Keith Thomas; Religion and the Decline of Magic; Penguin Books; 1971

Atlantis: Timaeus and Critias [ Introduction || The Dialogues || Cast of Characters ] Timaeus and Critias, two of Plato's dialogues, are the only existing written records which specifically refer to Atlantis. The dialogues are conversations between Socrates, Hermocrates, Timeaus, and Critias. Apparently in response to a prior talk by Socrates about ideal societies, Timeaus and Critias agree to entertain Socrates with a tale that is "not a fiction but a true story." The dialogues that follow were written by Plato some time around 360 BC and are English translations by Benjamin Jowett: Note: The pages and paragraphs of the dialogues are a convenience created by myself. Serves only as a brief introduction to Atlantis, a preface. Goto Page: 1 | 2 | 3 | 4 | 5 | 6 | 7 | 8 | 9 | 10 | 11 | 12 | 13 | 14 Critias Provides a detailed description of the lost island and its people as well as information about the ancient Athenians. Goto Page: 1 | 2 | 3 | 4 | 5 | 6 | 7 | 8 Those who actually take part in the dialogues:

2011 Starchild Skull Preliminary DNA Report Starchild Skull DNA Analysis Report—2011 A Layman's summary of this report is available HERE SUMMARY: Early in 2011, a geneticist attempting to recover Starchild Skull DNA identified four fragments that matched with human mitochondrial DNA (mtDNA). Comparing those fragments with matching fragments from human mtDNA produced an astonishing result. 1. 2. 3. 4. 2003 DNA Testing 5. 454 Life Sciences Technology 6. 2010 DNA Testing & Results 7. 2003 vs 2011 Mitochondrial DNA Testing 8. 2011 DNA Testing & Results 9. 10. Introduction To The Starchild Skull: The Starchild Skull is a 900-year-old human-like bone skull with distinctly non-human characteristics. By 2003, the Starchild Project had completed enough research to strongly suspect the Starchild was something never seen before by science. Formal research was carried out by credentialed experts in the USA, Canada, and UK. Drs. What You Need To Know About DNA: All humans have two types of DNA. In six full attempts (above), Dr.

The Other Mystery of Easter Island Moai statues Easter Island is branded into popular consciousness as the home of the mysterious and towering moai statues, but these are not the only curiosity the South Pacific island holds. Where the moai are fascinating for their unknown purpose and mysterious craftsmen, the island's lost language of Rongorongo is equally perplexing. The unique written language seems to have appeared suddenly in the 1700s, but within just two centuries it was exiled to obscurity. Known as Rapa Nui to the island's inhabitants, Rongorongo is a writing system comprised of pictographs. It has been found carved into many oblong wooden tablets and other artifacts from the island's history. In 1864, Father Joseph Eyraud became the first non-islander to record Rongorongo. Some time later, Bishop Florentin Jaussen of Tahiti attempted to translate the texts. Thompson was determined, however, and decided that Ure Va'e Iko might be more forthcoming under the influence of alcohol. An Indus valley connection?

Is Earth a Prison Planet and the Moon – Its Guardian? by Yiannis Isaac Asimov suggested a long time ago that the Moon is not a natural astral body. All independent studies ever since backed Asimov’s calculations and it was proven beyond any reasonable doubt that the gravitational features of the Moon are not just abnormal. They are the exact numbers required so that the Moon does not escape from the Earth’s gravity and be pulled towards the Sun, as it should be, according to the law of universal gravitation. Taking under consideration the hundreds of unnatural phenomena that happen on the surface of the moon that NASA never bothered to reveal to the general public but have nevertheless been observed for centuries by independent observers, it may be assumed that the Moon is a constructed spacecraft and not a normal astral body. The moon is older than the Earth. A theory that Moon was placed there as a shield for the Earth from meteorites has been depicted. 1. It cannot support habitation and sustain long lasting civilizations. 2. 3. So!

21 Brilliant British People Problems British people are well known for being educated and well mannered, easy-going people. But this list will certainly make you laugh at the reality of their “problems”, which seem nothing more than excessive politeness. We could all use a British touch in our lives. Lemuria Lemuria Lemuria, or Mu, is a mythical continent that allegedly was located in the Pacific Ocean area or the Pacific Ring of Fire. Today we read about accelerating natural disasters in that area - earthquakes, tsunamis - dormant volcanoes becoming active - as the tectonic plates continue to shift. This takes us to creation myths - thousands of flood stories around the world - the destruction of a continent and civilization by water, and the creation of something new to replace it in the cycles of time by the consciousness hologram that creates the illusion that this is all real. Japan: The Yonaguni Ruins are believed by some researchers to connect with Lemuria The islands within the Ring of Fire have ancient monuments, petroglyphs, and caves that hold clues to one of many ancient civilizations that once existed there - the most famous Easter Island. Samoans speak of a place called Bolutu. The Ica Stones of Peru may depict maps of the lost continent of Lemuria. Rig Veda History of the Concept