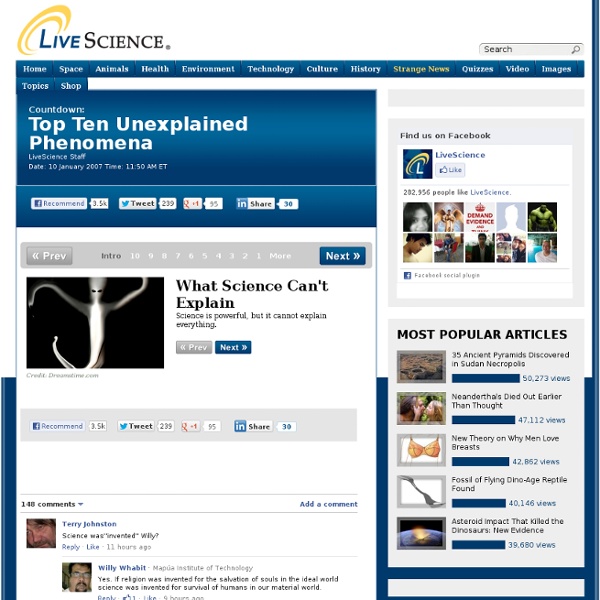 History's Most Overlooked Mysteries Tuan C. Nguyen | July 25, 2007 10:23am ET Credit: Photographed by Aurel Stein, circa 1910 Although many of life's great mysteries remain unsolved, there are some lesser known ones that also have stumped researchers for centuries. Visible Only From Above, Mystifying 'Nazca Lines' Discovered In Mideast The giant stone structures form wheel shapes with spokes often radiating inside. Here a cluster of wheels in the Azraq Oasis.David D. Boyer They stretch from Syria to Saudi Arabia, can be seen from the air but not the ground, and are virtually unknown to the public. They are the Middle East's own version of the Nazca Lines — ancient "geolyphs," or drawings, that span deserts in southern Peru — and now, thanks to new satellite-mapping technologies, and an aerial photography program in Jordan, researchers are discovering more of them than ever before. Referred to by archaeologists as "wheels," these stone structures have a wide variety of designs, with a common one being a circle with spokes radiating inside. "In Jordan alone we've got stone-built structures that are far more numerous than (the) Nazca Lines, far more extensive in the area that they cover, and far older," said David Kennedy, a professor of classics and ancient history at the University of Western Australia.

Scientist Prove DNA Can Be Reprogrammed by Words and Frequencies By Grazyna Fosar and Franz Bludorf THE HUMAN DNA IS A BIOLOGICAL INTERNET and superior in many aspects to the artificial one. Russian scientific research directly or indirectly explains phenomena such as clairvoyance, intuition, spontaneous and remote acts of healing, self healing, affirmation techniques, unusual light/auras around people (namely spiritual masters), mind’s influence on weather patterns and much more. In addition, there is evidence for a whole new type of medicine in which DNA can be influenced and reprogrammed by words and frequencies WITHOUT cutting out and replacing single genes. Only 10% of our DNA is being used for building proteins. It is this subset of DNA that is of interest to western researchers and is being examined and categorized. The Russian biophysicist and molecular biologist Pjotr Garjajev and his colleagues also explored the vibrational behavior of the DNA. One can simply use words and sentences of the human language! References:

Mysterious Phoenix Lights Re-ignite Extraterrestrial Claims September 20, 2011; 7:40 PM Local residents reported seeing strange lights in the sky over Phoenix Wednesday night. Photo courtesy of photos.com Strange lights over Phoenix have once again captured the imagination of conspiracy theorists and alien enthusiasts in the Southwest. Dozens of people said they saw a bright light or lights streaking across the sky on Wednesday night of last week over Arizona and Southern California in what authorities said were likely meteor sightings, according to Fox News. Officers from the Maricopa County Sheriff's Office fielded several calls about the supposed sightings, while deputies at Deer Valley Airport in north Phoenix described sightings of their own, said Lieutenant Justin Griffin. "It took an unusually long time to get across the sky," Griffin said to Fox. Public reports started pouring in to the Federal Aviation Administration (FAA) at about 7:30 p.m. local time on Sept. 14. "It could be meteors," said an official who declined to be identified.

Black Death Is 'Grandmother' of All Modern Plague The bacterium blamed for the Black Death that wiped out more than a third of Europe's population within about five years of the 14th century looks an awful lot like the modern versions of the plague-causing bug, new genetic research indicates. By taking the now-powdery black pulp out of the teeth of plague victims buried in London's East Smithfield Cemetery — a cemetery established solely to handle the onslaught of the Black Death once it arrived in the city in 1348 — researchers have managed to reconstruct the entire genetic blueprint, or genome, of the bacterium blamed for the devastation. Since science already have the same information for modern strains of plague bacteria, this gave the researchers the chance to explore perplexing questions about plague. [Pictures of A Killer: A Plague Gallery] Since genetic changes don't appearto explain this change in behavior, the researchers suggest an alternative: The 14th-century bug hit at a time when Europeans were already down.

UFO At NFL Game: TV Camera Captures Strange Object In Flight During Broadcast For many football fans who watched the New Orleans Saints rout the Indianapolis Colts on Oct. 23, the most unusual thing about the game was the lopsided final score of 62-7. But for UFO aficionados and paranormal experts who tuned in, they may have seen something in the sky that was even more out-of-the-ordinary than the tossing of more touchdowns vs. incompletions. As NBC's cameras returned from a commercial break and focused on the historic, triple-steepled St. Louis Cathedral in the city nicknamed the Big Easy, a couple of lit objects seemed to streak across the darkening sky -- and they've yet to be definitively identified. Viewed in real-time, it's hard to see much more than something flashing across the screen. Rod-shaped UFOs? In 1994, independent filmmaker Jose Escamilla was attempting to videotape UFOs near Roswell, N.M. -- yes, that Roswell -- home of the legendary, alleged crash of a UFO in 1947 that has captured the imaginations of millions of people for decades.

Lair of Ancient 'Kraken' Sea Monster Possibly Discovered | Ancient Sea Monsters & Ichthyosaurs | Mythological Beasts | Deadly Sea Creatures This article was updated on Oct. 11 at 10:42 a.m. ET A giant sea monster, the likes of the mythological kraken, may have swum Earth's ancient oceans, snagging what was thought to be the sea's top predators — school bus-size ichthyosaurs with fearsome teeth. The kraken, which would've been nearly 100 feet (30 meters) long, or twice the size of the colossal squid, Mesonychoteuthis, likely drowned or broke the necks of the ichthyosaurs before dragging the corpses to its lair, akin to an octopus's midden, according to study researcher Mark McMenamin, a paleontologist at Mount Holyoke College in Massachusetts. "It is known that the modern octopus will pile the remains of its prey in a midden and play with and manipulate those pieces," McMenamin said during a telephone interview. Storrs added, "On top of this, the specimens are not well preserved in their current setting, thus the arrangement, 'etching' and bone breakage may have alternate explanations. Cause of death The perfect crime?

Eighth wonder of the world? The stunning temples secretly carved out below ground by 'paranormal' eccentric Nestling in the foothills of the Alps in northern Italy, 30 miles from the ancient city of Turin, lies the valley of Valchiusella. Peppered with medieval villages, the hillside scenery is certainly picturesque. But it is deep underground, buried into the ancient rock, that the region's greatest wonders are concealed. Scroll down for more... Here, 100ft down and hidden from public view, lies an astonishing secret - one that has drawn comparisons with the fabled city of Atlantis and has been dubbed 'the Eighth Wonder of the World' by the Italian government. For weaving their way underneath the hillside are nine ornate temples, on five levels, whose scale and opulence take the breath away. Constructed like a three-dimensional book, narrating the history of humanity, they are linked by hundreds of metres of richly decorated tunnels and occupy almost 300,000 cubic feet - Big Ben is 15,000 cubic feet. Few have been granted permission to see these marvels.