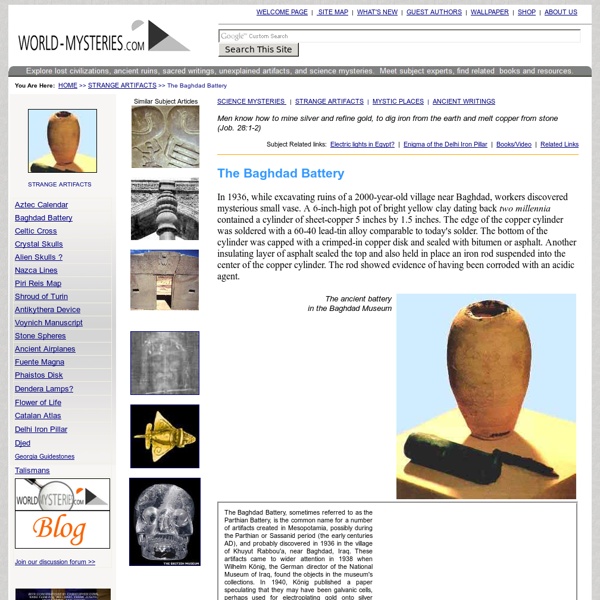 This experiment proved that electric batteries were used some 1,800 years before their modern invention by Alessandro Volta in 1799. It also seems that the use of similar batteries can be safely placed into ancient Egypt, where several objects with traces of electroplated precious metals have been found at different locations. There are several anomalous finds from other regions, which suggests use of electricity on a grander scale. The Riddle of "Baghdad's batteries" Arran Frood investigates what could have been the very first batteries and how these important archaeological and technological artefacts are now at risk from the impending war in Iraq. I don't think anyone can say for sure what they were used for, but they may have been batteries because they do work Dr Marjorie Senechal War can destroy more than a people, an army or a leader. Biblical clues THE KEY COMPONENTS Batteries dated to around 200 BC Could have been used in gilding Scientific awareness "They are a one-off. Enough zap

Top 10 Ancient Civilizations With Advanced Technology Like a real life Indiana Jones, maverick archeologist David Hatcher Childress has taken many incredible journeys to some of the oldest and most remote spots on earth. Writing prolifically of lost cities and ancient civilizations, he has produced no less than six lengthy books (the Lost Cities series) chronicling the dimly remembered glories of obscure locales from the Gobi desert to Puma Punku in Bolivia, from Mohenjo Daro to Ba'albek. We caught up with him shortly before taking off for New Guinea on yet another archeological expedition and asked him if he would be willing to write an exclusive for Atlantis Rising on the Top 10 Ancient Civilizations with Advanced Technology. He agreed to dig through his archives and give us a story. According to various esoteric sources, the first civilization arose 78,000 years ago on the giant continent known as Mu or Lemuria and lasted for an astonishing 52,000 years. Supposedly, there was one language and one government. 6.

Great Pyramid - Secret Tunnels of Giza Plateau Secret Tunnels of the Giza Plateau Boris Said Interviewed By Kenneth and Dee Burke Boris Said is the Emmy award-winning writer and producer of the NBC-TV feature documentary, "The Mystery of the Sphinx", hosted by Charlton Heston, which focused on the research of John Anthony West, alleging that the "water weathering" on the Sphinx indicates that it is much older than previously believed. Boris also produced the documentary "Secret Chamber", about the opening of the room under the Sphinx which was located during the "Mystery of the Sphinx", research. LE: Our readership will be interested in the kind of presentation of your material that you are planning to give at the February Global Sciences Congress in Florida. Boris: What I plan on doing at the Global Science Congress is to debunk some of the mystique that has been built up around Egypt and the Giza Plateau by some well-meaning and some not-so-well-meaning people who are trying to get to the bottom of the Atlantis legend. Boris: Yes.

Two Stone Age 9,500-Year-Old Artifacts Unearthed MessageToEagle.com - Archaeologists have unearthed two Stone Age figurines – c. 9,500 year old – in Tel Motza located between Jerusalem and Tel Aviv. The ancient figurines, found in excavations prior to widening Highway 1 in the area, depict a ram and a wild pig or buffalo. The ram, made from limestone, has intricately carved horns and is about 15 centimeters. The second figurine is more abstract and depicts a large animal with prominent horns that could be a bovine or buffalo. A rare early neolithic ram figurine. Anna Eirikh, the other co-director of the dig, believes that the figurines are linked to the process of animal domestication, as the inhabitants began to build complex societies and agricultural villages. Wild bovine. However, according to another theory, the figurines were used as talismans. A statement released by the IAA said the figurines could have been either good luck hunting icons or a representation of the animal’s domestication. Original source: - here MessageToEagle.com

Earliest Complete Human Figurine Unearthed On Cyprus Get our top stories Follow MessageToEagle.com Subscribe in a reader Other Popular Articles Sirius Mystery by Robert Temple - Book Review A spaceship arrived from the sky and landed with a great noise and wind, on three legs. Millennia Old Stone Faces Of Unknown Origin: Who Carved Them And For What Purpose? Strange faces and heads carved in stones have been discovered worldwide. Thousands Unknown Ancient StructuresSeen From Space: Puzzling Aerial Archeology In The Middle East Thousands of huge ancient structures made of stone are clearly visible from the air. Elusive Underwater Object Still A Great Puzzle - Divers Say They Felt Frightened The Swedish news agency Rapport is offering new unique images of the mysterious underwater object that many refer to as the "Baltic UFO". Destruction Of Ancient Timbuktu Shrines A ‘War Crime’ ICC Prosecutor Says Out-Of-Place Artifact With DNA "Not Similar" To Anything Ever Found On Earth Archaeological Mystery: What Was He Doing Underwater 7000 Years Ago?

10 Civilizations That Mysteriously Disappeared Throughout our history, most civilizations have either met a slow demise or were wiped out by sudden natural disasters or invasion. But there are a few societies whose disappearance has scholars truly stumped: 10. The Olmec One of the first Mesoamerican societies, the Olmec inhabited the tropical lowlands of south-central Mexico. The first signs of the Olmec are around 1400 BC in the city of San Lorenzo, the main Olmec settlement which was supported by two other centers, Tenochtitlan and Potrero Nuevo. Where did they go? 9. The Nabateans were a Semitic culture that inhabited parts of Jordan, Canaan and Arabia from around the sixth century BC. 8. The Aksumite Empire began in the first century AD in what is now Ethiopia and is believed to be the home of the Queen of Sheba. 7.The Mycenaeans Growing out of the Minoan civilization, the Myceanaeans merged around 1600 BC in southern Greece. 6. 5. 4. A prehistoric Native American people, the Clovis culture dates back to 10,000 BC. 3. 1.

Ancient Underwater City Found Off India: Discovery in Bay of Cambay Will Force Western Archaeologists to Rewrite History Now, it was announced in January, a civilization has been uncovered that would have appeared just as ancient to the people who built the pyramids as the pyramids seem to us. According to marine scientists in India, archaeological remains of this lost city have been discovered 36 metres (120 feet) underwater in the Gulf of Cambay off the western coast of India. And carbon dating says that they are 9,500 years old. This news completely contradicts the position of most Western historians and archaeologists, who (because it did not fit their theories) have always rejected, ignored, or suppressed evidence of an older view of mankind's existence on planet Earth. According to the BBC's Tom Housden, reporting on the Cambay find: Several reports confirm this estimate. Unheard-of Scope of Cambay Ruins The BBC article tells us that the remains of this ancient city stand upon "enormous foundations." The Find Includes Human Remains According to Howe:

Ten Mysterious Examples of Rock Art from the Ancient World Rock paintings and engravings are among the world’s oldest continuously practiced art form and are as diverse as the wide-ranging cultures and civilizations that have produced them. Depictions of elegant human figures, richly hued animals, unusual figures combining human and animal features, and detailed geometric patterns, continue to inspire admiration for their sophistication, powerful forms, and detailed representations, as well as for providing a window into the daily lives of our ancient ancestors. Here we feature some of the most amazing and mysterious examples of rock art from around the world, though there are thousands more that are equally as impressive. 10. The haunting rock art of Sego Canyon – extra-terrestrials or shamanic visions? The sandstone cliffs of Sego Canyon are a spectacular outdoor art gallery of petroglyphs painted and carved by Native Americans peoples over a period of around 8,000 years. 9. 8.

Mermaids are real, says the National Oceanic and Atmospheric Administration | Mission Galactic Freedom Hmm Donno if its True, but when the Govt says it does not exist?? You can seriously Question and think otherwise… And the kenyan article is also missing…. ~ Galactic human ~ Apparently the National Oceanic and Atmospheric Administration (NOAA) published a newsfeed article titled Conclusive Evidence of the Existence of Aquatic Humanoids. According to claims made in this article from a Kenyan news source, mermaids can be seen on paleolithic cave paintings and actually still exist in the ocean. I don’t know if I’m fully convinced of the cliche image of a magical, seductive girl rooming the ocean half-naked. Published on Feb 1, 2015 The belief in mermaids may have arisen at the very dawn of our species. Recommended Videos: Mermaids Caught on Tape – Amazing Footage! Mermaids Caught on Tape – Part 2 HD: Published on Aug 31, 2014 Also watch Part 2: Source Like this: Like Loading...

The Fascinating Link Between The Pyramids And Other Worldly Visitors The pyramids are one of earth’s most fascinating standing structures -or at least to me they are. There have been many theories discussed as to how they were built, who built them and even why they were built. Ever since I was a kid I had been looking into each question surrounding the pyramids and in the end I felt that they were created by something “not of this world.” “According to the accepted version of history, the three massive Pyramids on the Giza Plateau in Egypt were built by armies of Hebrew slaves for the glory of the Pharaohs of Egypt. The Pyramids are supposed to be monuments to the Pharaohs, tombs to preserve the royal bodies for a continued existence in the afterlife, and yet no bodies have ever been found inside them. Let me start by examining some hard facts which nobody can dispute, and looking in turn at what these facts might represent or mean: 1. 2. 3. 4. 5. 6. 7. 8. 9. 10. 11. What can we deduce from these facts? B – Other numbers are also repeated throughout.

The Story Of Elongated Skulls And The Denied History Of Ancient People: An Interview With Mark Laplume Mark Laplume is an artist and independent researcher who has been engaged in making reconstruction drawings of ancient people with elongated skulls. I have already had the pleasure of showcasing his remarkable work in a gallery on fetuses and children with elongated heads, and in a post on the visualization of ancient populations. Mark’s reconstructions were also illustrated in an article on suppressed evidence challenging the Artificial Cranial Deformation paradigm as the only way of explaining elongated skulls. Mark now shares some of his insights into the mystery of elongated skulls with the readers of Ancient Origins. IG: Mark, how did you become interested in elongated skulls and why did you decide to start reconstructing the appearance of these people? In 2006, when I first downloaded Google Earth, I looked around at places I knew and then made a bee line to the south end of Lake Titicaca. Evidence of ancient civilization in Bolivia. Brien Foerster with an elongated skull.