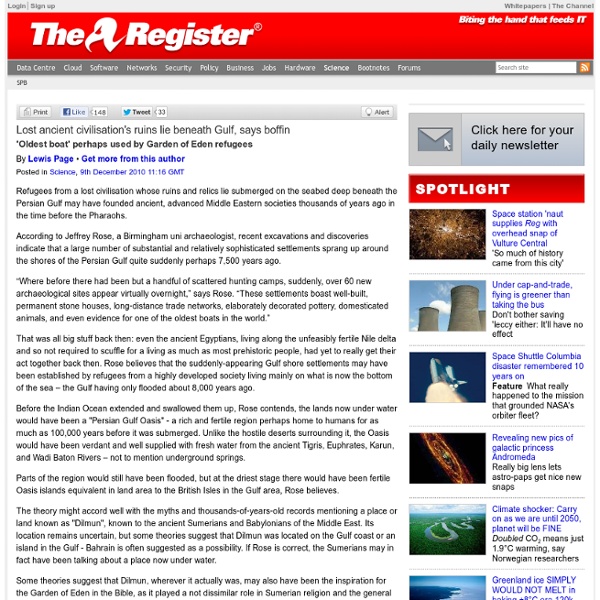 High performance access to file storage Refugees from a lost civilisation whose ruins and relics lie submerged on the seabed deep beneath the Persian Gulf may have founded ancient, advanced Middle Eastern societies thousands of years ago in the time before the Pharaohs. According to Jeffrey Rose, a Birmingham uni archaeologist, recent excavations and discoveries indicate that a large number of substantial and relatively sophisticated settlements sprang up around the shores of the Persian Gulf quite suddenly perhaps 7,500 years ago. “Where before there had been but a handful of scattered hunting camps, suddenly, over 60 new archaeological sites appear virtually overnight,” says Rose. “These settlements boast well-built, permanent stone houses, long-distance trade networks, elaborately decorated pottery, domesticated animals, and even evidence for one of the oldest boats in the world.” Related:  Ancient Civilizations

mpany digging mine in Afghanistan unearths 2,600-year-old Buddhist monastery By Daily Mail Reporter Updated: 10:47 GMT, 15 November 2010 A Chinese company digging an unexploited copper mine in Afghanistan has unearthed ancient statues of Buddha in a sprawling 2,600-year-old Buddhist monastery. Archaeologists are rushing to salvage what they can from a major 7th century B.C. religious site along the famed Silk Road connecting Asia and the Middle East. The ruins, including the monastery and domed shrines known as 'stupas,' will likely be largely destroyed once work at the mine begins. The ruins were discovered as labourers excavated the site on behalf of the Chinese government-backed China Metallurgical Group Corp, which wants to develop the world's second largest copper mine, lying beneath the ruins. Historic find: Mes Aynak's religious sites and copper deposits have been bound together for centuries - 'mes' means 'copper' in the local Dari language No one wants to be blamed for similarly razing history at Mes Aynak, in the eastern province of Logar.

White Europeans 'only evolved 5,500 years ago after food habits changed' By Daily Mail Reporter Updated: 13:58 GMT, 31 August 2009 People in England may have only developed pale skin within the last 5,500 years, according to new research. Scientists believe that a sudden change in the diet around that time from hunter-gathering to farming may have led to a dramatic change in skin tone to make up for a lack of vitamin D. Farmed food is lacking in vitamin D and while humans can produce it when exposed to the ultraviolet light in sunlight darker skin is far less efficient at it. People with pale skin may be descended from Europeans who dramatically changed their diets after switching from hunter-gathering to farming Scientists at the University of Oslo believe this change in diet may have led to our dark-skinned ancestors evolving paler skin to overcome this problem. The link between skin colour and Vitamin D from sunlight has been suggested before. Children with fair skins are able to get their daily dose of Vitamin D with just 10 to 20 minutes in the sun.

AncientCanalBuilders.com Mysterious Pyramid Baffles Chinese Scientists No one seems to know the origin or the meaning behind a mysterious pyramid that sits atop Mount Baigong in western China that local legends claim is an alien UFO launch tower. Nine scientists form the team that will travel to the western province of Qinghai and the mouth of this 165-198 foot tall structure known as the “ET Relics.” “The pyramid has three caves with openings shaped like triangles on its façade and is filled with red-hued pipes leading into the mountain and a nearby salt water lake,” says China’s state-run Xinhua agency. To add to the mystery, iron debris and unusually shaped stones are scattered about the desolate area. “The theory that the pyramid was created by extra terrestrials is “understandable and worth looking into…but scientific means must be employed to prove whether or not it is true,” says Yang Ji, a researcher at the Chinese Academy of Social Sciences. On the beach at nearby Toson Lake, many strangely-shaped iron pipes lay amid the sands and rocks. (Link)

World-wide Ancient Site Database, Photos and Prehistoric Archaeology News with geolocation Archaeologists discover earliest evidence of seafaring in Crete ATHENS, Jan. 5 (Xinhua)-- Greek and foreign archaeologists have traced the earliest evidence of seafaring in tools dating back to 130,000 years ago during excavations on Crete island, the Greek Culture Ministry said in a statement Wednesday. In over a century of systematic archaeological research on the southern Greek island, scientists had not found evidence that Crete was inhabited before the Neolithic period (7,000-3,000 B.C.). Recent findings of an excavation at Plakias- Preveli near the city of Rethymnon, which started in 2008 by a research team led by Thomas Strasser of the American School of Classical Studies in Athens and Eleni Panagopoulou of the Greek Ministry of Culture and Tourism, show that Crete was inhabited as early as the Palaeolithic period. Noting that even 130,000 years ago Crete was an island, archaeologists present the tools found as evidence that the ancestors of modern man sailed earlier than we thought so far.

Signs of Atlantis found in southern Spain: scientists - Health Scientists say they may have discovered the lost city of Atlantis buried deep under the marshlands of southern Spain. The legendary city is believed to have been "swallowed up by the sea," as the Greek philosopher Plato so famously put it 2,400 years ago. He wrote of a great city destroyed by floodwaters following an earthquake deep under the sea — an image that resonates at a time when Japan is struggling to recover from a devastating earthquake and tsunami off its northeast coast. A National Geographic television special that aired on Sunday details the work of American, Canadian and Spanish scientists as they attempt to prove Atlantis existed by following up on space satellite images showing unusual features in an area just north of Cadiz. The area is near the Straits of Gibraltar — widely thought to be the "Pillars of Hercules" Plato mentioned in his description of the location of Atlantis. The team is led by archaeologist Richard Freund of the University of Hartford in Connecticut.

Amazing Metropolis Discovered in Africa is 200,000 years old! By Dan Eden for viewzone. They have always been there. People noticed them before. Something amazing has been discovered in an area of South Africa, about 150 miles inland, west of the port of Maputo. The image [top of page] is a close-up view of just a few hundred meters of the landscape taken from google-earth. This changed when researcher and author, Michael Tellinger, teamed up with Johan Heine, a local fireman and pilot who had been looking at these ruins from his years flying over the region. "When Johan first introduced me to the ancient stone ruins of southern Africa, I had no idea of the incredible discoveries we would make in the year or two that followed. Where it was found The area is significant for one striking thing -- gold. Did gold play some role in the dense population that once lived here? The individual ruins [see below] mostly consist of stone circles. How the Site was dated NEXT: The Dating of the Site Viewzone || Comments?

Archeology in Peru The Ancient Maya and their origins The Maya were a civilization that devoted much of their time to the worship and study of the cosmos and celestial bodies. A belief in astronomy and cosmology dominated their culture, religion and their every day lives in ways that we are only beginning to understand. The Maya lived their lives by a very complex calendar that was based upon the movements of the stars and planets, and while many of their beliefs and practices may appear to be nothing but superstition, it seems evident that their calendar was based upon real events and real movements in the sky that do in fact have an effect on the Earth. In Mayan society a belief in astronomy and in the importance of the movements of celestial bodies was utterly essential to their culture and to how they conducted their everyday lives, and while some of their practices can certainly fall under the “superstition” banner some of their beliefs and practices can not be easily rejected and definitely had a profound effect on their lives.

"Lost" Language Found on Back of 400-Year-Old Letter Notes on the back of a 400-year-old letter have revealed a previously unknown language once spoken by indigenous peoples of northern Peru , an archaeologist says. Penned by an unknown Spanish author and lost for four centuries, the battered piece of paper was pulled from the ruins of an ancient Spanish colonial church in 2008. But a team of scientists and linguists has only recently revealed the importance of the words written on the flip side of the letter. The early 17th-century author had translated Spanish numbers—uno, dos, tres—and Arabic numerals into a mysterious language never seen by modern scholars. (Related: " 'Lost' Languages to Be Resurrected by Computers"? ) "Even though [the letter] doesn't tell us a whole lot, it does tell us about a language that is very different from anything we've ever known—and it suggests that there may be a lot more out there," said project leader Jeffrey Quilter , an archaeologist at Harvard’s Peabody Museum of Archaeology and Ethnology.

The Yosemite Mummies | | Greater AncestorsGreater Ancestors The “Yosemite Mummies” Photo from Ripley’s Believe it or Not who currently host the mummies. The Giants of Yosemite Valley By Bobbie Short The year, 1885. In California’s great Yosemite Valley under the misty expanse near Bridal-Veil Falls, a party of silver and wannabe gold miners discovered what was to become the mystery of the decade. While having lunch, Mr. Seasoned miners, they were familiar with the natural formation of rock, this particular grouping struck Mr. The miners set about removing the pile of stones. “As pretty as any wall on any building that I have ever seen” is the way one miner described it. Disappointment fell heavily upon their heads as, in the end, they found the vault empty save a very large mummified corpse that lay on the ledge, which was carved from the natural stone for the express purpose of burial. The miners removed parts of the animal skins to view the corpse and found it to be that of a woman holding a child to her breast. In an additional excerpt, Capt.