10 of the Greatest Unsolved Mysteries 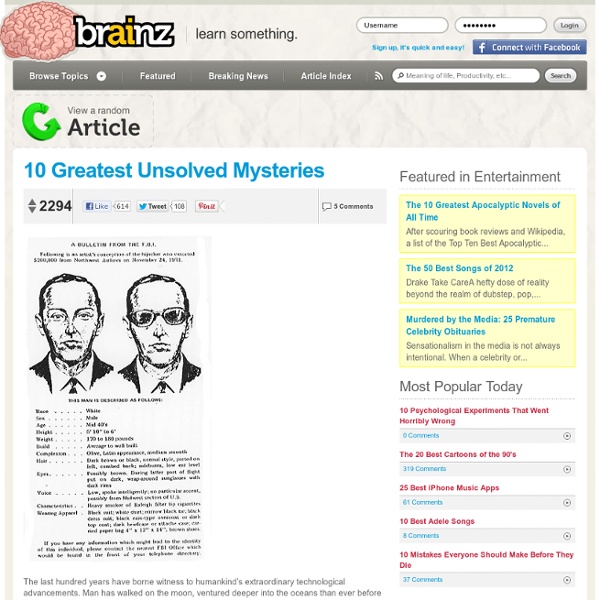 The last hundred years have borne witness to humankind’s extraordinary technological advancements. Man has walked on the moon, ventured deeper into the oceans than ever before and even uncovered the building blocks of life, DNA. But even with our inexorable progress as a species there are still mysteries and enigmas the solutions to which elude us. Below is a selection of 10 of the most puzzling mysteries in history. 10) The SS Ourang Medan In June 1947, a chilling SOS message was picked up: “All officers including captain are dead lying in chartroom and bridge. It was picked up by nearby ships and listening posts, who identified the vessel as the Dutch freighter SS Ourang Medan and located it within the Strait of Malacca that separates Indonesia from Malaysia. The decision was made to tow the mysterious ship back to port, but before they could get underway, smoke began emanating from the decks below. 9) The Aluminum Wedge of Aiud 8) Dulce Base 7) BEKs One man did let the children in.

Exclusive > The 8 Best Websites to Legally Watch Movies for Free by Brendan Lopez With all of the news coverage on file sharing websites that allow people to download movies illegally, sometimes less attention is paid to the websites that feature free and legal entertainment. Full-length movies – and decent ones at that – are out there. It’s just a matter of knowing where to look. Here are 8 sites to turn to when you’re in the mood for a good film, but don’t have the cash to rent one or desire to steal. 1. With its sleek design, easy to use interface, and high definition options, Hulu is a bit of the obvious choice. AWESOME MOVIES TO WATCH: Sexy Beast, Eddie Murphy Raw, Broken Flowers 2. In October of 2008, IMDB expanded its offerings. AWESOME MOVIES TO WATCH: Requiem for a Dream, Hoop Dreams, Slacker 3. The word “torrent” has certain connotations considering many people use them to download content illegally. 4. AWESOME MOVIES TO WATCH: The Man Who Knew Too Much, The Treatment, David and Goliath. 5. AWESOME MOVIES TO WATCH: Who Killed the Electric Car?

7 Facts About Dogs You Probably Didn't Know - Barkpost 1 year ago BarkPost manager, ghostwriter for dogs. Find me on Twitter. Sure, everyone knows that happiness is a warm puppy and that you should never stand between a fire hydrant and a well-hydrated dog, but here are seven more facts that you might not know about your four-legged ruv. 7. 6. 5. 4. 3. 2. 1. Main photo source. Confessions 2012 Las Vegas, NV Interactive gallery installation in The Cosmopolitan that invites people to anonymously share their confessions and see the confessions of the people around them in the heart of the Las Vegas strip. Amidst casinos, restaurants and bars, Chang invited passersby to write confessions on wooden plaques in the privacy of confession booths. Chang arranged the anonymous plaques on the gallery walls like a Shinto shrine prayer wall, painted select responses on 4’x4’ canvases, and orchestrated the space with an original score by Oliver Blank. The project explored the design of safe spaces for anonymity, vulnerability, understanding, and consolation. 2012, Las Vegas, NV.

Empire's 500 Greatest Movies Of All Time 10,000 Empire readers, 150 of Hollywood's finest and 50 key film critics voted in the most ambitious movie poll evert attempted. 500. Ocean's Eleven (2001) Director: Steven Soderbergh Slick, suave and cooler than a penguin's knackers, Soderbergh's starry update of the Rat Pack crime caper not only outshines its predecessor, but all the lights of The Strip combined.Read our Ocean's Eleven review 499. Saw (2004) Director: James Wan The never-ending stream of sequels may have diminished its impact, but there's no denying the shock we got when we first entered the puzzle-loving psycho Jigsaw's fiendish, deathtrapped world.Read our Saw review 498. Director: Robert Zemeckis From the past to the present to the future and back again, Zemeckis hits his time-travelling stride with this chronology-screwing popcorner - only seven years to go until we discover if his vision of 2015 was on the money.Read our Back to the Future Part II review 497. 496. 495. 494. 493. 492. 491. 490. 489. 488. 487. 486.

Apollo Astronaut Says 'UFOs Are Real' Apollo Astronaut Admits 'The Alien Threat Is Real' On UK Radio Show Dr. Edgar Mitchell, the sixth man to walk on the Moon during the Apollo project, recently appeared on a UK radio show where he claimed that aliens are real and that people at NASA has know this for many years. Radio DJ, Nick Margerisson, of Kerrang! Radio, could not believe his ears as Mitchell openly discussed the subject on his radio show on 22nd of July, 2008. Here is the complete transcript of the show. Broadcast on: The Night Before with Nick Margerrison, Kerrang! Nick Margerrison :Do you believe in life on other planets? Dr Mitchell: Oh yes there’s not much question at all but there’s life throughout the universe, we’re not alone in the universe at all N – You’re convinced that we’re not alone in the Universe? DM- Oh I know for sure that we’re not alone in the Universe. N - Woah. DM – Well I’m sorry have you not been reading the papers recently, its starting to open up quite a bit. N – So you believe the whole deal

Haunting, black-and-white self-portraits by young Hungarian artist mesmerize Flickr fans by Dan Havlik posted Tuesday, February 26, 2013 at 7:36 PM EDT Noell S. Oszvald does not want to be called a photographer, claiming she's "not yet one" in a message to Imaging Resource when we contacted her about her work. After Oszvald's Flickr page attracted thousands of fans, her haunting images, which recall a Bergman film mixed with a Salvador Dali painting, have been featured on photo blogs and art sites around the world. While we weren't able to get Oszvald to explain her process for creating her striking work -- a message to her via her Flickr page about what camera and technique she uses went unanswered -- that could be in keeping with her philosophy about her photos. "I don't want to tell people what to see in my images," Oszvald told My Modern Metropolis. Oszvald notes that she only shoots in black and white because she finds colors to be a distraction. Check out her work below, which is being featured here with her permission. (Via Bored Panda) Prejudice (photo by Noell S.

Lion and dachshund are best friends [7 pictures] Five years ago, at an Oklahoma exotic animal park , a lion was born with a bone disease that left him somewhat less than fully abled. A 2-year-old dachshund took notice of the cub’s infirmity and brought the little guy into his pack of other dachshunds. Now, as 5- and 7-year-olds, the two animals are like inseparable brothers, playing and cuddling and eating their meals of raw meat together. It doesn’t seem to bother them at all that one is a 500-pound lion and the other an 11-pound wiener dog… (via The Daily Mail )

Color Psychology in Logo Design COLOUR PSYCHOLOGY IN LOGO DESIGN Our minds are inherently programmed to respond to colour. They shape our thoughts and emotions. And according to studies, colour affects more than mood — it has the ability to change our buying habits. Colour can invoke as much as an 80 per cent change in motivation when it comes to online shopping, advertising, and marketing campaigns. While perceptions of color are somewhat subjective, some color effects have universal meaning. Here are some examples of how different colours are perceived, and logos that were designed to aggressively or subtly reach their market. ->white The universal colour of peace and purity. Cleanliness Innocence Peace Purity Refined Sterile Simplicity Surrender Truthfulness ->yellow Can have conflicting messages Bright and highly visible, it’s often used in logo design to get attention, create happiness and warmth. Caution Cheerful Cowardice Curiosity Happiness Joy Playful Positivity Sunshine Warmth McDonald’s -> red