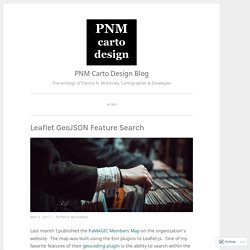 The map was built using the Esri plugins to Leaflet.js. One of my favorite features of their geocoding plugin is the ability to search within the features of a map/feature service. The map is using this plugin to allow users to search for members by name. When a user types a member’s name into the search control, matching results appear. Il mistero delle vie fantasma e delle città inesistenti nelle mappe. Metod y tecn. GeoJSON in Three.js - bl.ocks.org. This example demonstrates how to display a GeoJSON MultiLineString geometry object as a wireframe using Three.js. 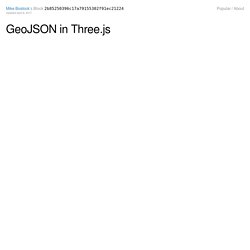 Each point in the GeoJSON is converted from spherical coordinates (longitude and latitude in degrees) to three-dimensional Cartesian coordinates as follows: Geodetic Coordinates And Latitude, Longitude. This is a great question because it uncovers important sources of common misunderstandings. 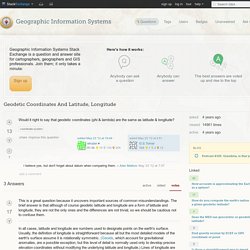 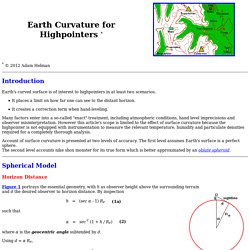 It places a limit on how far one can see to the distant horizon. It creates a correction term when hand-leveling. Many factors enter into a so-called "exact" treatment, including atmospheric conditions, hand level imprecisions and observer misinterpretation. Account of surface curvature is presented at two levels of accuracy. Spherical Model Horizon Distance.

Calculate distance between two points on a globe. Haversine Formula[edit] 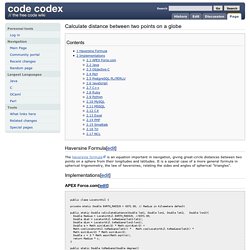 Codes. Program Haversine; (* * This program calculates the distance between two points on * Earth. Its uses the Haversine formula and gives results in * meters (this is easy to change however). Pascal has not the * atan2 function implemented so it was to be defined explicitly. Here * we have used the one provided by Paul Schlyter * * * More info: * *) Var radius,lon1,lon2,lat1,lat2,dlon,dlat,a,distance :extended; Begin {of the main program} radius:=6378.137; {Earth equatorial radius in Km; as used in most GPS} {Input here coordinates of the two points:} {The Haversine formula} 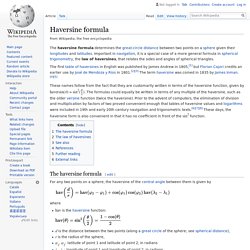 Important in navigation, it is a special case of a more general formula in spherical trigonometry, the law of haversines, that relates the sides and angles of spherical triangles. The first table of haversines in English was published by James Andrew in 1805,[1] but Florian Cajori credits an earlier use by José de Mendoza y Ríos in 1801.[2][3] The term haversine was coined in 1835 by James Inman.[4][5] These names follow from the fact that they are customarily written in terms of the haversine function, given by haversin(θ) = sin2(θ/2). The formulas could equally be written in terms of any multiple of the haversine, such as the older versine function (twice the haversine). The haversine formula[edit] Openstreetmap - How to find a point half way between two other points? QGIS to Blender GIS: Terrain model from contours. Turf-distance. Turf.js is a modular geospatial engine written in JavaScript, that helps create spatial analysis in browser. 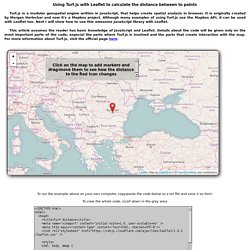 It is originally created by Morgan Herlocker and now it's a Mapbox project. Although many examples of using Turf.js use the Mapbox API, it can be used with Leaflet too. Next I will show how to use this awesome JavaScript library with Leaflet. This article assumes the reader has basic knowledge of JavaScript and Leaflet. How to Use the Spreadsheet for Converting UTM to Latitude and Longitude (Or Vice Versa) Steven Dutch, Natural and Applied Sciences, University of Wisconsin - Green Bay First-time Visitors: Please visit Site Map and Disclaimer. 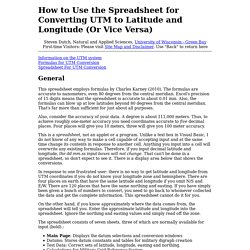 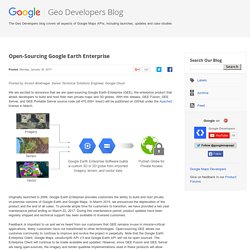 With this release, GEE Fusion, GEE Server, and GEE Portable Server source code (all 470,000+ lines!) Will be published on GitHub under the Apache2 license in March. Originally launched in 2006, Google Earth Enterprise provides customers the ability to build and host private, on-premise versions of Google Earth and Google Maps. More than you ever wanted to know about GeoJSON - macwright.org. Let's look at GeoJSON in a little more depth, from the ground up. 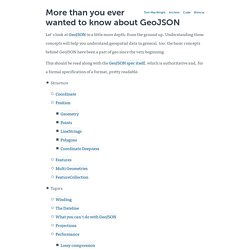 Understanding these concepts will help you understand geospatial data in general, too: the basic concepts behind GeoJSON have been a part of geo since the very beginning. This should be read along with the GeoJSON spec itself, which is authoritative and, for a formal specification of a format, pretty readable. Coordinate.