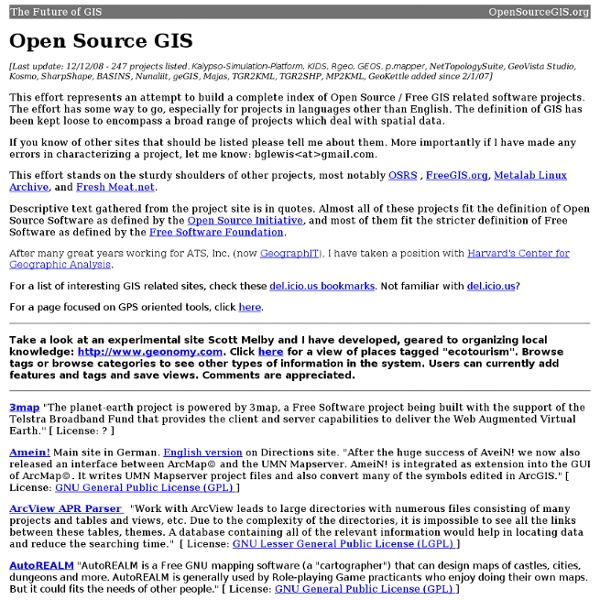 Open Source GIS [Last update: 12/8/2013 - About 350 projects listed.] This effort represents an attempt to build a complete index of Open Source / Free GIS related software projects. In addition to those alphabetized here, many great projects are listed at the end and will be integrated soon. And this will all move to a proper database. The definition of GIS is kept loose to encompass a broad range of projects which deal with spatial technology.

Working with Coordinate Systems The great thing about geographic information systems is that data from different sources can be juxtaposed, according to the way that each is related to the suface of the planet -- and new information emerges about possible realtionships. This is made possible by spatial referencing systems such as Latitude and Longitude or projected coordinate systems. Software is getting better at aligning images and layers that are referenced in different coordinate systems, nevertheless we often encounter problems getting layers to line up as they should. This document provides some tips for troubleshooting and fixing alignment problems with spatial data. Topics Covered in this Document Related Documents

TraceMedia - Luminous Cities Megacities View the geo-coded traces of Flickr users in the largest world cities, including Beijing, Cairo, Hong Kong, Tokyo. Tokyo City Map Digitizing Errors in GIS Digitizing in GIS is the process of converting geographic data either from a hardcopy or a scanned image into vector data by tracing the features. During the digitzing process, features from the traced map or image are captured as coordinates in either point, line, or polygon format. Types of Digitizing in GIS

The Best Map Ever Made of America's Racial Segregation Last year, a pair of researchers from Duke University published a report with a bold title: “The End of the Segregated Century.” U.S. cities, the authors concluded, were less segregated in 2012 than they had been at any point since 1910. But less segregated does not necessarily mean integrated–something this incredible map makes clear in vivd color. The map, created by Dustin Cable at University of Virginia’s Weldon Cooper Center for Public Service, is stunningly comprehensive.

Links « Contour Education Interactive Maps Ordnance Survey MapZone This is a brilliant site that is perfect for introducing your students (all ages) and staff to the basic concepts behind GIS software. The site contains lots of information on what GIS is, how it is used in the real world as well as links to helpful sites. The best feature though is the GIS missions – or GIS games.