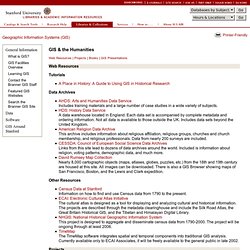 MapAnalyst - MapAnalyst. WATERS OF ROME: hydraulic infrastructure/aqueducts/fountains/sewers. Aquae Urbis Romae is an interactive cartographic history of the relationships between hydrological and hydraulic systems and their impact on the urban development of Rome, Italy. 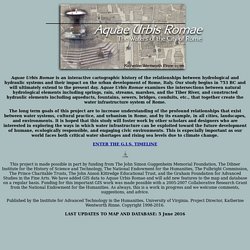 Our study begins in 753 BC and will ultimately extend to the present day. Aquae Urbis Romae examines the intersections between natural hydrological elements including springs, rain, streams, marshes, and the Tiber River, and constructed hydraulic elements including aqueducts, fountains, sewers, bridges, conduits, etc., that together create the water infrastructure system of Rome. The long term goals of this project are to increase understanding of the profound relationships that exist between water systems, cultural practice, and urbanism in Rome, and by its example, in all cities, landscapes, and environments. Published by the Institute for Advanced Technology in the Humanities, University of Virginia. 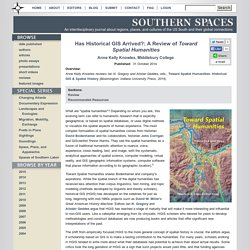 Depending on whom you ask, this evolving term can refer to humanistic research that is explicitly geographical, or based on spatial databases, or uses digital methods to visualize the spatial aspects of human experience. LOKSTAT. Start_nl. China Historical GIS. Visu beta. The Agas Map. Our new (as of the beginning of 2015) implementation of the Agas Map is based on the OpenLayers 3.0 library. 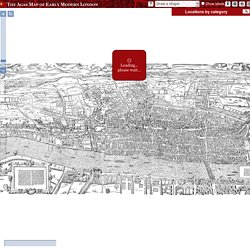 It presents the map as a zoomable, rotatable tiled image with several hundred locations plotted on it. In the default view, the locations are initially hidden; you can show them by checking checkboxes in the navigation panel which appears at the top right of the map. Locations in the navigation panel are sorted into categories; click on a category name to expand it and see all the locations. Some locations appear in more than one category. Zoom in and out using the scroll wheel on your mouse, or the zoom control at the top left. Apart from this, these are the main things you will want to do with the map: 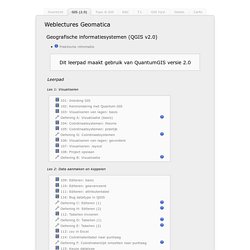 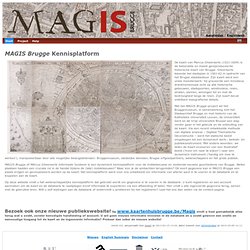 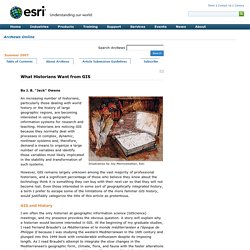 B. "Jack" Owens An increasing number of historians, particularly those dealing with world history or the history of large geographic regions, are becoming interested in using geographic information systems for research and teaching. Historians are noticing GIS because they normally deal with processes in complex, dynamic, nonlinear systems and, therefore, demand a means to organize a large number of variables and identify those variables most likely implicated in the stability and transformation of such systems. However, GIS remains largely unknown among the vast majority of professional historians, and a significant percentage of those who believe they know about the technology think it is something they can buy with their next car so that they will not become lost. Great Britain Historical Geographical Information System (GBHGIS) The Great Britain Historical Geographical Information System is a unique digital collection of information about Britain's localities as they have changed over time. 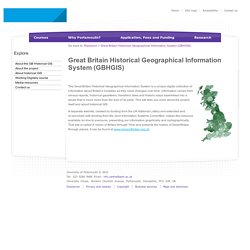 Information comes from census reports, historical gazetteers, travellers' tales and historic maps assembled into a whole that is much more than the sum of its parts. This site tells you more about the project itself and about historical GIS. A separate website, created by funding from the UK National Lottery and extended and re-launched with funding from the Joint Information Systems Committee, makes this resource available on-line to everyone, presenting our information graphically and cartographically. That site is called A Vision of Britain through Time and presents the history of Great Britain through places. It can be found at www.visionofbritain.org.uk. Educatief GIS portaal. Historical GIS. The AAG Historical GIS Forum provides a digital exchange center for historians, geographers, and other humanities scholars to network with each other and discuss pressing research needs and topics, such as: Challenges facing historical GIS work Best practices in GIS-based historical research Key technical issues and how to resolve them Data consistency and comparability issues Theoretical and conceptual issues in approaches to incorporating geographical data into historical research projects AAG members and non-members alike are encouraged to participate in the Forum. 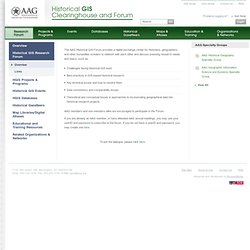 If you are already an AAG member, or have attended AAG annual meetings, you may use your userID and password to subscribe to the forum. If you do not have a userID and password, you may create one here. To join the dialogue, please click here. GIS Manual: Georeferencing Images and CAD Data. Maps & GIS: useful websites. GIS and remote-sensing – University of Reading. This page includes a list of internet resources where data (including both vector mapping data and raster remote sensing data) can be obtained for inclusion in a Geographical Information System (GIS) or use with image processing software. 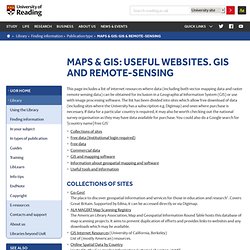 The list has been divided into sites which allow free download of data (including sites where the University has a subscription e.g. Digimap) and ones where purchase is necessary. If data for a particular country is required, it may also be worth checking out the national survey organisation as they may have data available for purchase. You could also do a Google search for '[country name] free GIS' Open Source GIS. Historical gazetteer of London before the Great Fire - Cheapside; parishes of All Hallows Honey Lane, St Martin Pomary, St Mary le Bow, St Mary Colechurch and St Pancras Soper Lane. Accueil - Atlas historique de Paris. Gazetteer of Sixteenth Century Florence. Mapping Medieval Chester: Mapping Medieval Chester: place and identity in an English borderland city c.1200-1500.

DECIMA: The Digitally Encoded Census Information and Mapping Archive, and the Project for a Geo-Spatial and Sensory Digital Map of Renaissance Florence. Home. [Amsterdam] — Amsterdam. Spatial History Project. The Spatial History Project at Stanford University, a part of the Center for Spatial and Textual Analysis (CESTA), is made possible by the generous funding of the Vice Provost for Undergraduate Education (VPUE), DoResearch, The Andrew W.

Mellon Foundation, and The Wallenberg Foundation Media Places Initiative. The Spatial History Project at Stanford University is a place for a collaborative community of students, staff, and scholars to engage in creative spatial, textual and visual analysis to further research in the humanities. We are part of the Center for Spatial and Textual Analysis (CESTA) along with Humanities+Design and the Literary Lab on the top floor of Wallenberg Hall.

We continually seek fruitful collaborations with faculty at Stanford and beyond, and hire motivated students year round. If you are interested in learning more, please contact Matt Bryant. Historical GIS Research Network. This list is not exhaustive but we aim to include all of the major historical GIS websites plus additional relevant websites. Other portals are also available such as those from: the GeoHumanities Special Interest Group of the Alliance of Digital Humanities Organizations, the Humanities GIS Zotero Library, and the University of Saskatchewan's HGIS Lab. Resources are classed under: National Historical GISs Other online Historical GIS projects Historical map servers and other data sources Organisations Software Other useful sites. LOCATING LONDON'S PAST.

Locating London's past: a geo-referencing tool for mapping historical and archaeological evidence, 1660-1800. Locating London´s Past has created an intuitive GIS interface that enables researchers to map and visualize textual and artefactual data relating to seventeenth and eighteenth-century London against a fully rasterised version of John Rocque´s 1746 map of London and the first accurate modern OS map (1869-80). More than this, it makes these data and maps available within a Google Maps container, allowing for the analysis of the data with open source visualization tools.

The interface is readily expandable to include additional data sets and maps (both modern and historic). Building on the partnerships created through the JISC funded Connected Histories project, and through a new collaboration with the Museum of London Archaeological Service (MOLA), Locating London´s Past has produced a working GIS-enabled public web environment that allows existing electronic historical data about London to be repackaged and organised around space.