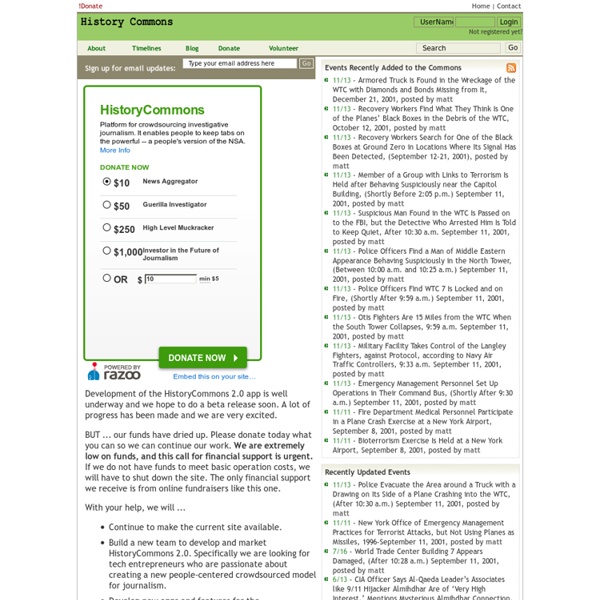 Development of the HistoryCommons 2.0 app is well underway and we hope to do a beta release soon. A lot of progress has been made and we are very excited. BUT ... our funds have dried up. Please donate today what you can so we can continue our work. We are extremely low on funds, and this call for financial support is urgent. If we do not have funds to meet basic operation costs, we will have to shut down the site.

Here are 10 things about 9/11 that deserve more attention – and 5 that deserve less People need to know just how absurd the official story of the Shanksville “crash” is. By Craig McKee Let’s face it: the 9/11 Truth Movement is all over the place. But that’s not surprising – nor necessarily bad. When you have an official story that is so clearly false in so many ways, there are going to be a multitude of valid angles from which to examine and expose the deception. There are also going to be many directions the movement can take to advance the cause and to awaken the uninitiated. The 1931 Histomap: The entire history of the world distilled into a single map/chart. The Vault is Slate's history blog. Like us on Facebook, follow us on Twitter @slatevault, and find us on Tumblr. Find out more about what this space is all about here. This “Histomap,” created by John B. Sparks, was first printed by Rand McNally in 1931.

Why You Must CARE About 9/11 Truth; Plus, Massive Evidence That 9/11 Was an Inside Job “The commission had to subpoena the F.A.A. for documents, had to subpoena NORAD for documents and they will never get the full story. That is one of the tragedies. One of these days we will have to get the full story because the 9/11 issue is so important to America. But this White House wants to cover it up.” [1] -Max Cleland, 9/11 Commission member Today is the 11 year anniversary of the September 11, 2001 tragedy. Regarding the events of that tragic day, we can be certain of one thing: we have not been told the truth.

Do firefighters believe 9/11 conspiracy theories? In the new season of the FX drama Rescue Me, firefighter Franco Rivera espouses the belief that 9/11 was "an inside job." According to a Sunday New York Times article, the show's writers added this assertion because actor Daniel Sunjata is a "truther"; but the real firefighters on set—who work as script advisers—were offended by his allegations. This got the Explainer wondering: Do any firefighters believe in 9/11 conspiracy theories? German ancestry, Sexual perversion in the royal family, Prince Charles, Elizabeth II, Antichrist and the Green Prince, British Royal occultism European Royalty and Biblical prophecy 15 Jan 2016 - BANKING PIRATES OF THE CITY OF LONDON [see below] See Tim Cohen and Martin Lauchenauer's sites for some of the latest info. Occult Symbol of the Phoenix in Charles' back garden!

Russia Reveals 9/11 Satellite Imagery Evidence Indicating USA Gov’t Complicity In False Flag Attack This press release is perhaps the single most explosive revelation ever covered by State of the Nation. There is no story bigger than 9/11 as far as the U.S. Federal Government is concerned. Simply put, it is and has been their lynchpin. by Scientific Panel Investigating Nine-Eleven, 9/11/2001 Abstract Wings that should have been sheared off by the impact are entirely absent. There is also substantial evidence of debris from a much smaller jet-powered aircraft inside the building. We conclude with a high degree of certainty that no Boeing 757 struck the building. We also conclude with a substantial degree of certainty that a smaller, single-engined aircraft, roughly the size and shape of an F-16, did, in fact, strike the building. Introduction

Hard Facts About 9-11 That Cannot Be Debunked 9-11 has been one of the biggest events in recent history that sparked a mass awakening across the world. There has been much debate as to how it happened, who is responsible and why. To this day about 1/3 of americans do not believe the official story. In other areas of the world as much as 90% of the country does not believe the official story. 1) Nano Thermite was found in the dust at Ground Zero. Government Involvement in 9/11 In the summer of 2000, the Project for the New American Century (PNAC), a neo-conservative think tank riddled with soon to be Bush administration officials and advisors, issued a document calling for the radical restructuring of U.S. government and military policies. It advocated the massive expansion of defense spending, the re-invasion of Iraq, the military and economic securing of Afghanistan and Central Asia, increased centralized power and funds for the CIA, FBI, and NSA, among a slew of other policies that would, in the near future, be enacted upon their ascension to power. In the same document, they cite a potential problem with their plan. Referring to the goals of transforming the U.S. and global power structure, the paper states that because of the American Public's slant toward ideas of democracy and freedom, "this process of transformation is likely to be a long one, absent some catastrophic and catalyzing event - like a new Pearl Harbor." (ibid.) back to top