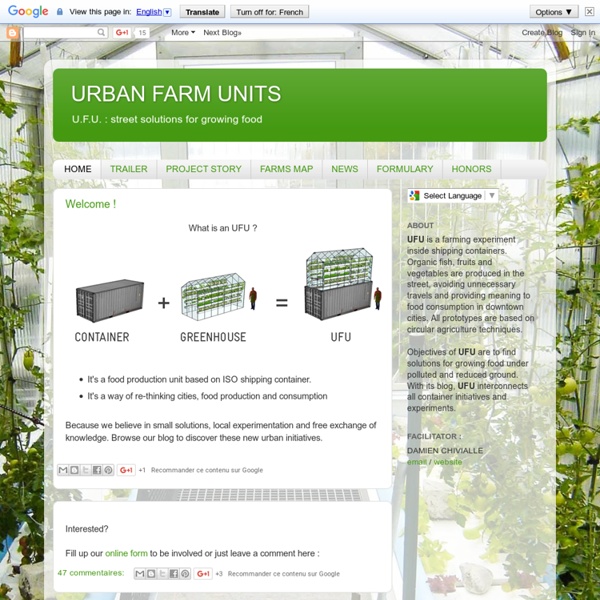 re:farm the city I will share here a low cost solution for the recycling of organic waste, appropriate for apartments and urban housing that do not have a piece of land or an outdoor area. This construction is inspired by the Cadico earthworms nice project. The photos are from the composter I made here at home : ) It’s called a Vermi composter because we use worms in the process, uhuuuuu big thanks to the worms, they deserve! To make this kind of composter, it is important to use stackable supports to separate the different stages of composting. In this case, I used 3 buckets of margarine 15L reused. You can ask for them for free at local businesses such as coffee shops, bakeries, juice houses, etc..

Vincent Callebaut Architecte DRAGONFLY The world of fast-food and frozen food is over! The urban keen interest of the beginning of our Century turns toward the garden flat bringing back the countryside in our overcrowded cities fighting from now on for a community urban agriculture able to contribute to the durability of the city and to rethink the food production. On the roofs, terraces, balconies, in the hollow of the non-built public spaces, in the interior yards and the suspended greenhouses, the eco-warrior aspires to escape from its competitive and consumeristic universe imposed by the laws of the market. He desires to cultivate its immediate landscape so as to better take root in the ground by creating his own ecologic and alimentary biodiversity.

The Taiwan Tower is a Sustainable Twin Syscraper for the 21st Century The Taiwan Tower is a proposal by Vienna-based architect Steven Ma in Collaboration with San Liu, Xinyu Wan, and Emre Icdem. This highly innovative project consists of a set of super slim twin towers that reach a height of 350 meters where an observatory and sky-park is located. The plinth of the towers is formed by an intricate set of museums that will exhibit Taiwan’s past, present, and future. Eco-Pods Produce Bio-Fuel Energy We have seen the financial outcome of the Real Estate crash in 2008. What sometimes we overlook are the urban voids left by unfinished buildings. That is the case of the Filene’s development in downtown Boston which construction was halted in November 2008. Höweler + Yoon Architecture and Squared Design Lab think this as an opportunity to explore new ways of producing architecture. They have designed a prefabricated ‘Eco-Pod’ that proposes to stimulate the economy and the ecology of downtown Boston.

Reinterpreting Green Space in West London This post is also available in: Chinese (Traditional) ‘A product of the creative encounter between the man-made and the natural, between order and disorder, the garden can offer productive metaphors for the interactions between human life and time, care, thought or space.’ The fate of the city garden has been featured on This Big City in the past. With pressure on urban space increasing as populations grow and building becomes more intensive, will gardens be a less common sight in future cities? Those interested in this subject (who happen to be in London this weekend) might enjoy the Serpentine Gallery’s Garden Marathon.

About City Farmer Shoemakers, fashion models, computer geeks, politicians, lawyers, teachers, chefs … all city dwellers … all can grow food at home after work in back yards, community gardens or on flat roofs. For the past 36 years, City Farmer has encouraged urban dwellers to pull up a patch of lawn and plant some vegetables, kitchen herbs and fruit. Our message is the same today as it was in 1978 and will be relevant far into the future. This website is a collection of stories about our work at City Farmer here in Vancouver, Canada, and about urban farmers from around the world. The site is maintained by City Farmer executive director, Michael Levenston. Email: cityfarmer@gmail.com