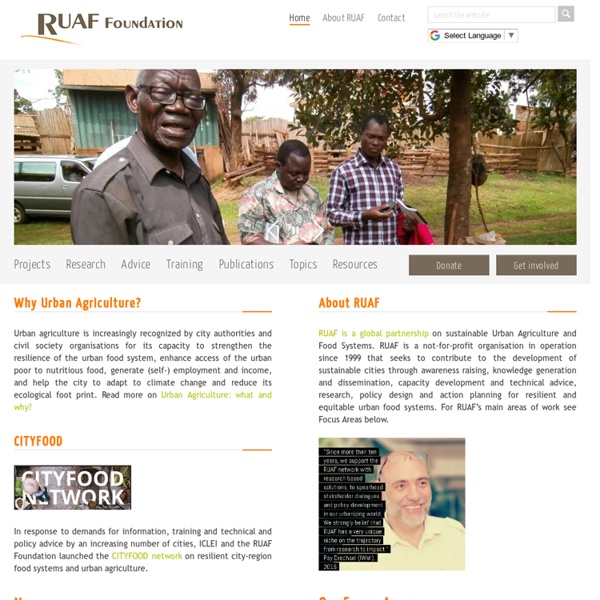 The RUAF Foundation is a global network with member organisations in Africa, Asia, the Middle East, Latin America and Europe together constituting a leading centre of expertise in the field of (intra- and peri-) Urban Agriculture and City Region Food Strategies. RUAF is a not-for-profit organisation in operation since 1999 with legal status in the Netherlands that seeks to contribute to the development of sustainable cities by facilitating awareness raising, knowledge generation and dissemination, capacity development, policy design and action planning for resilient and equitable urban food systems. For RUAF’s main areas of work see Focus Areas below.

Urban Farming The practice of cultivating food and raising animals in an urban environment is referred to variously as urban farming or urban agriculture. Whilst small-scale and localised food production has a long history, including individual allotments which have been popular in Europe since the late C18, it is the integration of such farming practices within the economic and ecological system of towns and cities that is a newer development. This means that urban resources such as compost from food waste and waste water from urban drainage is made use of, whilst urban problems such as the pressure on land and development also have to be negotiated. The recent of example of Cuba has proven the effectiveness of urban agriculture, where it played a critical role in ensuring food security after the collapse of the Soviet Union in 1989. Other Work

Youth In Agriculture Growing Beyond Farms BUCKEYE-Woodland Learning Urban Farm, located in Cleveland, OH, produces a variety of vegetable crops, including tomatoes and peppers, on just 1.5 acres. The farm is supported by The Green Corps, which is a work/study program of the Cleveland Botanical Gardens for students in the inner city. This youth education component is a unique and important element to agriculture in the city, as many of the students taking part in the program have little-to-no outside growing experience. (Editor’s Note: The mission of Green Corps, according to the Cleveland Botanical Gardens, is to encourage life, work, and leadership skills by employing and educating high school students in areas such as sustainable agriculture, place-based learning, and community engagement.) 1.

What is Urban Farming? : Greensgrow Farms Attend a food conference today and in all likelihood there will be a tract on urban farming. There will be participants and speakers referring to themselves as urban farmers. Google “urban agriculture” and you will find thousand of sites. Urban farming is clearly in the minds eye of many individuals, community groups, food justice advocates, environmentalists, city planners and gardeners. Server by Alastair Parvin « arkinet Some days ago we published the first of a serie of projects from the the President’s Medals for Students Projects organized by theRoyal Institute of British Architects (RIBA). The winning entries will be published on December 2, so in the meanwhile, we continue publishing some of the students projects that are participating. This time the project is called SERVER and it was presented by Alastair Parvin from The University of Sheffield Sheffield UK.

Plans to transform Liverpool city centre flyover into “promenade in the sky” Ambitious idea to breathe new life into roadway A campaign to save Liverpool’s city centre flyover and transform it into a “promenade in the sky” has been launched. The Friends of the Flyover group was set up after the city’s 2012 Strategic Investment Framework (SIF) proposed the removal of the Churchill flyover which runs from Islington, past Central Library and the World Museum though to Dale Street. A Brief History of Allotments in England In the early and high Middle Ages villagers shared pieces of land around the village to eke out an existence. However, rises in the population and changes in agriculture gradually put pressure on this “shared” approach, leading to moves to privatise this common land. Land Enclosure, as it was called, occurred principally in the 18th and 19th centuries, benefiting a relatively small minority while disenfranchising the majority.

re:farm the city I will share here a low cost solution for the recycling of organic waste, appropriate for apartments and urban housing that do not have a piece of land or an outdoor area. This construction is inspired by the Cadico earthworms nice project. The photos are from the composter I made here at home : ) It’s called a Vermi composter because we use worms in the process, uhuuuuu big thanks to the worms, they deserve! Thesis: Urban Agriculture in Amsterdam Understanding the recent trend in food production activities within the limits of a developed nation’s capital By Peter de Lange Master thesis in the program Environment and Resource Management University Amsterdam Aug. 21, 2011 69 pages Abstract Urban agriculture, the practice of growing food inside a city, can play a significant role in a cities food system, especially in feeding the urban poor.

Memories of Mr Seel's Garden About What is Mr Seel’s Garden? Going into Liverpool’s city centre to buy fresh veg, grown locally in town, might seem pretty far-fetched. But if you go around the corner from Liverpool ONE’s Tesco Superstore you’ll find a plaque that shows that the area around Hanover street, including the land the Tesco now sits on, used to be full of market gardens. The plaques reproduce an 18th Century map of the area, with the description stating that this area was once ‘Mr Seel’s Garden’. Atelier d'architecture autogérée Atelier d'architecture autogérée (aaa - Studio for Self-managed Architecture) is a practice based in Paris co-founded by architects, Constantin Petcou and Doina Petrescu in 2001. aaa acts as a platform for collaborative research and action on the city and much of their work is carried out with other specialists, artists, researchers and institutional partners such as universities, arts organisations and NGOs, as well as the eventual users of their spaces. Whilst the founding members of aaa remain, the practice operates as a collaborative network that forms around each project. aaa's projects are experiments in the temporary reuse of leftover urban space through the setting up of an enabling infrastructure that is slowly taken over by local residents and transformed into self-managed spaces. Other Work AAA and PEPRAV (eds.), UrbanACT (Montrouge: Moutot Imprimeurs, 2007).

Imagining an Elastic City Planters and urban gardening tools at Kennedy Greenway in central Boston, the site of the Occupy Boston encampment. Last spring, after attending a panel about urbanism in Mumbai, I wrote a blog post about what I called the "entropic city" — one that is constantly changing and re-imagining itself. “Entropy,” I argued, “is a cultural and an economic necessity. Restricting and channeling change imposes a dominant idea of what change should be, and what existing conditions are undesirable. But it also stifles innovation and creates monocultural economic environments that are vulnerable to dramatic changes. And, let's be honest, it's a lot less fun.” Générer des rendements plus élevés VertiCrop™ provides a proven, cost effective alternative to typical crop production. Designed to grow in any climate and with an exceptionally small footprint in urban environments, VertiCrop™ uses only a fraction of the resources needed for field agriculture, while generating substantially higher yields. Growing with VertiCrop™ Yields are approximately 20 times higher than the normal production volume of field crops VertiCrop™ requires only 8% of the normal water consumption used to irrigate field crops Works on non-arable lands and close to major markets or urban centers Does not require the use of harmful herbicides or pesticides Able to grow over 50 varieties of leafy green vegetables Significantly reduces transportation distance, thereby reducing cost and carbon foot print Provides higher quality produce with greater nutritional value and a longer shelf life High levels of food security due to the enclosed growing process Scalable from small to very large food production operation

Projets Greenroofs.com - Changi General Hospital The Changi General Hospital website states, "The hospital has made caring for the environment a priority, because the long-term benefits and savings help both people and the surroundings we live in. Patients are often worried and frightened when they come to a hospital. By beautifying the hospital with lots of plants and trees, we wish to create a more serene and restful environment for patients. Similarly, planting hydroponics on the rooftops provides food for the hospital, but also absorbs the heat from the roof, cooling the wards facing it.

Istanbul: City of Seeds It was generous of the The Building Information Centre (YEM) and 34Solo to host an xskool event in their city last week. Our starting premise, after all, was that Turkey’s 30 year long construction boom is losing momentum. True, the sound of jackhammers was pervasive in Istanbul during our visit – but the cold winds of the global crisis are making themselves felt. An estimated 600,000 dwellings stand unsold in the city and, in January, a first attempt to raise private funding for a third bridge across the Bosphorous failed. Not a single company showed interest. Back in 1995, Mayor Erdogan of Istanbul declared that a third bridge would be “murder” for forests and reservoirs around the city.