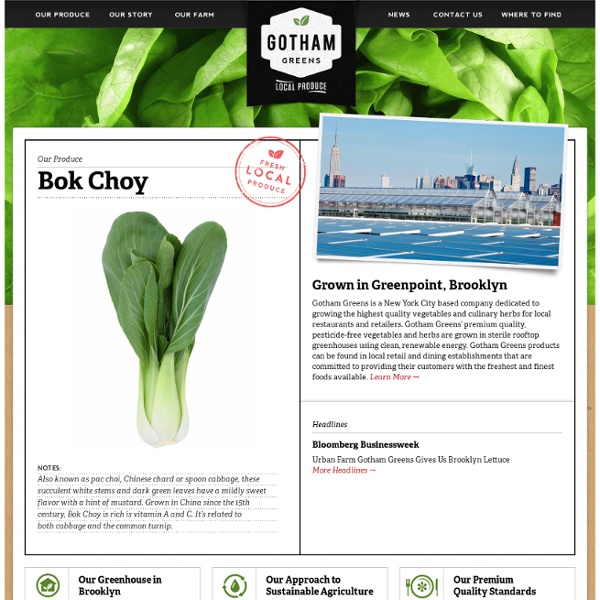 Urban gardens: The future of food? - Dream City With penny-farthings, handlebar mustaches and four-pocket vests back in fashion, the rise of urban farming should just about complete our fetish for the late 1800s. Today, you can find chicken coops on rooftops in Brooklyn, N.Y., goats in San Francisco backyards, and rows of crops sprouting across empty lots in Cleveland. That it fits so snugly into the hipster-steampunk throwback trend is what makes urban farming ripe for ridicule. (“Portlandia” has taken a crack or two at it.) But could city-based agriculture ever make the leap from precious pastime to serious player in our cities’ food systems — not just for novelty seekers and committed locavores, but for the Safeway-shopping masses? “I don’t want to make a statement like, ‘This is the future of farming,’” says Gotham Greens co-founder Viraj Puri, sitting at his laptop in Greenpoint, Brooklyn, steps away from hundreds of rows of butter lettuce.

What Will Farming Look Like in 2050? As it stands, Big Agriculture companies like Monsanto dominate the farming industry with their patented, genetically-engineered crops. The burgeoning organic movement has slowly shifted the tide, but it's still hard to imagine a day when the small, organic growers hold sway over the multinational corporations that are currently in charge. Protofarm 2050, a project put together by Design Indaba, tries to imagine what such a sustainable farming future might look like--and how we can get there. Protofarm 2050 acknowledges that there is no silver bullet with the problem of sustainable farming, and instead focuses on an array of scenarios that could become viable in the future.

A Book that aims to bring the farm to the city Carrot City Creating Places for Urban Agriculture By Mark Gorgolewski, June Komisar and Joe Nasr. The Monacelli Press High-tech greenhouse planned for downtown Vancouver parkade rooftop VANCOUVER -- The roof of a city-owned downtown parkade will be converted to a high-tech vertical growing space capable of producing 95 tonnes of fresh vegetables a year. Vancouver-based Valcent Products has entered into a memorandum of understanding with EasyPark, the corporate manager of the city’s parkades, to build a 6,000-square-foot greenhouse on underutilized space on the roof of the parkade at 535 Richards Street, in the heart of the downtown core. The inside of the greenhouse will be anything but ordinary. Four-metre-high stacks of growing trays on motorized conveyors will ferry plants up, down and around for watering, to capture the sun’s rays and then move them into position for an easy harvest.

Pasona O2: Urban Underground Farming Two years ago we first covered Tokyo's underground farm; It is called Pasona O2 and was set up as a means of providing agricultural training to young people who are having trouble finding employment and middle-aged people in search of a second career. Of course, since we first posted the interest in local food has increased dramatically and there has been much more interest in urban farming. We also came upon some new information: The Pasona Group has a traditional farm in Ogata, but they want the "freeters" (Japanese slackers who hop between part time jobs) to get a taste, so to speak.

Five Reasons Why Urban Farming is the Most Important Movement of our Time I love suburbia not for what it is, but for what it could be. While most other houses on my street have grass lawns, my yard sprouts zucchinis, tomatoes, pomegranates, kale, spinach, apples, figs, guavas, almonds, garlic, onion, strawberries, and more. Over 500 plant species all in all. We grow more than 3000 pounds of food per year on a plot of land the size of a basketball court—enough fruits and vegetables to feed my family of four year-round. Our house is part of a growing global movement of people involved in urban farming. The simple act of planting a garden can shape issues like economics, health, and politics at the same time because food is an essential focal point of human activity.

Urban Farming: Zoning for Growing and Distributing Food in Portland Neighborhoods « Northwest Land Law Forum In a continued effort to encourage all things local, the City of Portland is taking steps to impose order onto the booming business of local, urban food production by formally recognizing market and community gardens, farmers markets, and food co-ops within its zoning code. Portland is joining a handful of other cities – such as San Francisco, Seattle, Philadelphia and Kansas City, reducing zoning barriers and encouraging the growing and selling of food in urban spaces. Although these activities have been allowed on a temporary basis within existing open spaces and empty parking lots, the objective with these amendments is to make existing uses permanent, create additional opportunities for access to new sources of food while, at the same time, restricting and mitigating negative impacts. A series of draft urban food zoning code amendments scheduled for adoption in May of 2012 aims to update food production codes to increase the food options available within urban areas. Carrie A.

DIY Aquaponics - Aquaponics made easy so you can do it yourself - Benefical Bacteria for the Growbed Bacteria play an important role the health and well being of your aquaponics system by removing the ammonia from the water. This is not a special or magical thing unique to aquaponics, filters in home aquariums as an example use the same families of bacteria to perform the necessary task of removing the ammonia in a very similar fashion. The Nitrogen Cycle When our fish excrete waste (we'll call it poo or poop from now on because we're all friends here) the fish poo contains a very high percentage of ammonia. OMEGA GARDEN Contact Us Omega Garden Int.Qualicum Beach, B.C.Canada 1 250-752-13011-888-976-6342info@omegagarden.comomegagarden@gmail.com View Larger Map text sitemap • Copyright © 2014.