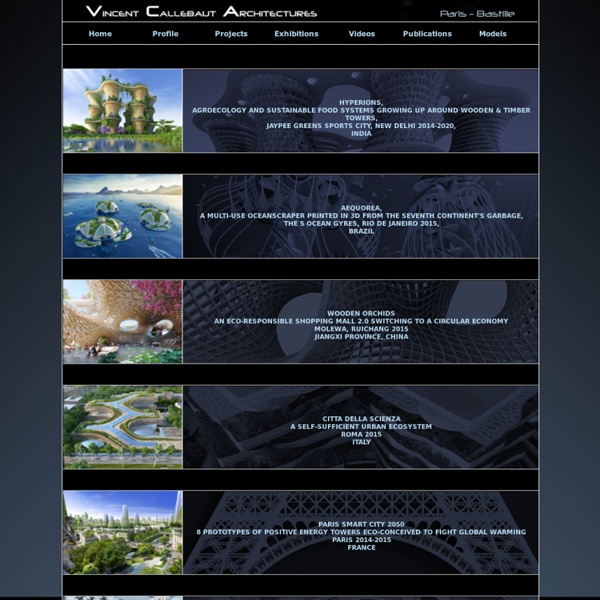 The Floating Villages of Lake Titicaca These lake dwellers consider themselves guardians of the lake and are said to predate the Incan civilisation, and according to their legends passed from generation to generation, existed before even the sun, stars and moon. So it’s no wonder they’re worried about being inundated with inquisitive sorts. For more information on Lake Titicaca, see our article on the highest lakes in the world. Source 1, 2, 3 Vincent Callebaut Architecte TAICHUNG {*style:<b>PROJECT TITLE : Taiwan Tower Planning, Design and Construction Supervision Service Project </b>*} {*style:<b>LOCATION : Taipei, Taiwan </b>*} {*style:<b>TYPE : International Competition, Project not retained for the second stage

SPLIT House Split in plan and section, the parti of the house allows for a flood of light to the centre. The house is designed as space for spectacle – the owner is a regular host of a large network of friends and family, and wanted a place that could feel grand. The trick with this was to make a house that could also feel intimate for day to day living. A rich brown wood floor that connects with the ipe deck outside serves as a counterpoint to the high ceilings of the main space, and connects the inside to the outside. This, in combination with the design of smaller more intimate spaces and moments throughout the ground floor make for a house that is equally good for two as it is for 30. From the interior the house has views of the sky and the neighbourhood, and a strong connection to the landscape and pool out back.

Vincent Callebaut Architecte CORAL PROGRAM : "Construction of 1000 prefabricated passive houses"CLIENT : Municipality of Port-au-PrinceLOCATION : Port-au-Prince, HaitiPERSPECTIVES : Benoit PatterliniSTATUS : In progress Called «The Pearl of West Indies», Haiti was during a long time the most visited country of the Greater Antilles representing the occidental third of Hispaniola Island. Devastated in 2010 by an earthquake measuring 7.0 on the Richter scale, the country has now to be rebuilt from new innovative architectural and town-planning concepts. The Coral Reef project plans a matrix to build a three dimensional and energy self-sufficient village from one and only standardised and prefabricated module in order to rehouse the refugees from such humanitarian catastrophes. This basic module is simply made of two passive houses (with metallic structure and tropical wood facades) interlocked in duplex around a transversal horizontal circulation linking every unit.

Stealth Stone Summer Home Rises Right Up from the Rocks Set along the rocky coast of Norway, you might not even notice this home in the distance sitting there on the shore – it blurs boundaries between architecture and landscape in a sublime (and stealthy) way. In fact, the house (designed by Jarmund/Vigsn?s)?had to do conform to its surrounding environment simply to get a permit in the first place – but the result goes beyond meeting bare necessities of local building codes. Sustainable construction on water NMNM, Nouveau Musee National de Monaco, celebrated its opening after almost two years of consolidation and renovation with "La Carte d'après Nature". Anne Holtrop presents Floating Gardens/SpaWellness Amsterdam together with work from artists Luigi Ghirri, Martin Boyce, Rodney Graham and René Magritte. 'Floating Gardens/SpaWellness Amsterdam' also in Virserum Art museum Stockholm, Sweden, in Germany at the 'Ludwig Forum for International Art'' in Aachen during 'West Arch', and on the International travelling exhibition 'Architecture of Consequence' At the São Paolo Architecture Biennale, ‘Architecture of Consequence' was released.

Japan National Stadium and Galaxy Soho by Zaha Hadid Architects When Zaha Hadid Architects’ 330,000-square-metre Galaxy Soho complex opened in Beijing last month our readers were left guessing how it relates to the surrounding neighbourhood. This set of images by photographers Hufton + Crow shows just that (+ slideshow). Completed last month by Zaha Hadid Architects, the retail, office and entertainment complex comprises four domed structures, which are fused together by bridges and platforms around a series of public courtyards and a large central “canyon”. Archipelago Cinema / Buro Ole Scheeren + Film on the​ Rocks Yao Noi Foundation Architect: Buro Ole Scheeren + Film on the Rocks Yao Noi Location: Kudu Island, Thailand Year: 2012 Photographs: Doug Bruce, Film on the Rocks Yao Noi Foundation, Piyatat Hemmatat, Sixtysix Visual The final night of the first edition of Film on the Rocks Yao Noi took place on Archipelago Cinema, designed by German-born and Beijing-based architect Ole Scheeren. Guests were taken by boat through the darkness of the sea to arrive on a glowing raft in the middle of the quiet waters of Nai Pi Lae lagoon on Kudu Island. Surrounded by a dramatic landscape of towering rocks emerging from the ocean, the audience experienced an atmospheric convergence of nature and cinematic narratives – primordial notions of light, sound and stories suspended in the darkness between sea and sky. “The thought of watching films here seemed surprising,“ said Ole Scheeren. „A screen, nestled somewhere between the rocks.