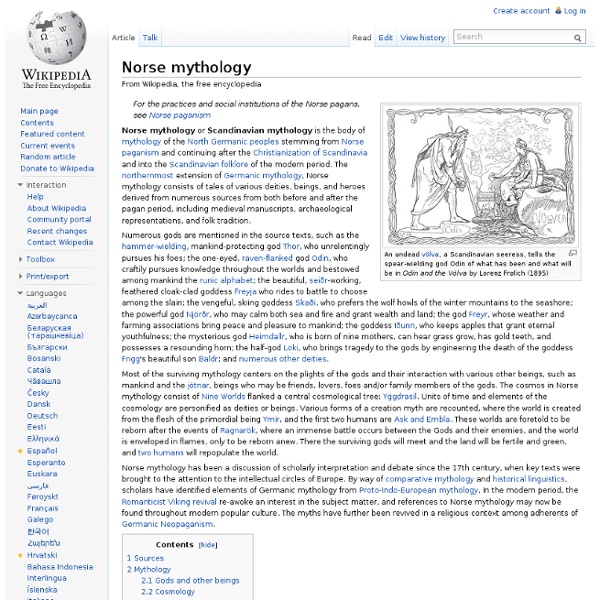 An undead völva, a Scandinavian seeress, tells the spear-wielding god Odin of what has been and what will be in Odin and the Völva by Lorenz Frølich (1895) For the practices and social institutions of the Norse pagans, see Norse paganism Norse mythology, or Scandinavian mythology, is the body of mythology of the North Germanic people stemming from Norse paganism and continuing after the Christianization of Scandinavia and into the Scandinavian folklore of the modern period. The northernmost extension of Germanic mythology, Norse mythology consists of tales of various deities, beings, and heroes derived from numerous sources from both before and after the pagan period, including medieval manuscripts, archaeological representations, and folk tradition. Most of the surviving mythology centers on the plights of the gods and their interaction with various other beings, such as humanity and the jötnar, beings who may be friends, lovers, foes and/or family members of the gods. Sources[edit]

Norse paganism Norse religion refers to the religious traditions of the Norsemen prior to the Christianization of Scandinavia, specifically during the Viking Age. Norse religion is a subset of Germanic paganism, which was practiced in the lands inhabited by the Germanic tribes across most of Northern and Central Europe. Knowledge of Norse religion is mostly drawn from the results of archaeological field work, etymology and early written materials. Terminology[edit] Mjölnir pendants were worn by Norse pagans during the 9th to 10th centuries. This Mjolnir pendant was found at Bredsätra in Öland, Sweden.

Norse Mythology - the gods of the Vikings Introduction The red-blooded, rip-roaring, gung-ho Gods beloved by the Vikings. We could have listed them as Nordic, but 'Norse' sounds like the snorting of a giant battle stallion so we went for that. Ancient Egyptian technology Ancient Egyptian depiction of women engaged in mechanical rope making, the first graphic evidence of the craft, shown in the two lower rows of the illustration Technology in Dynastic Egypt[edit] Significant advances in ancient Egypt during the dynastic period include astronomy, mathematics, and medicine. Their geometry was a necessary outgrowth of surveying to preserve the layout and ownership of farmland, which was flooded annually by the Nile river.

Norse rituals Norse pagan worship is the traditional religious rituals practiced by Norse pagans in Scandinavia in pre-Christian times. Norse paganism was a folk religion (as opposed to an organised religion), and its main purpose was the survival and regeneration of society. Therefore, the cult was decentralized and tied to the village and the family, although evidence exists of great national religious festivals. The leaders managed the cult on behalf of society; on a local level, the leader would have been the head of the family, and nationwide, the leader was the king. Pre-Christian Scandinavians had no word for religion in a modern sense.

Germanic Myths, Legends, and Sagas Compiled by D. L. Ashliman See also Great Pyramid of Giza The Great Pyramid of Giza (also known as the Pyramid of Khufu or the Pyramid of Cheops) is the oldest and largest of the three pyramids in the Giza Necropolis bordering what is now El Giza, Egypt. It is the oldest of the Seven Wonders of the Ancient World, and the only one to remain largely intact. Based on a mark in an interior chamber naming the work gang and a reference to fourth dynasty Egyptian Pharaoh Khufu,[1][2] Egyptologists believe that the pyramid was built as a tomb over a 10 to 20-year period concluding around 2560 BC. Initially at 146.5 metres (481 feet), the Great Pyramid was the tallest man-made structure in the world for over 3,800 years.

Ragnarök The north portal of the 11th century Urnes stave church has been interpreted as containing depictions of snakes and dragons that represent Ragnarök In Norse mythology, Ragnarök is a series of future events, including a great battle foretold to ultimately result in the death of a number of major figures (including the gods Odin, Thor, Týr, Freyr, Heimdallr, and Loki), the occurrence of various natural disasters, and the subsequent submersion of the world in water. Afterward, the world will resurface anew and fertile, the surviving and returning gods will meet, and the world will be repopulated by two human survivors. Ragnarök is an important event in the Norse canon, and has been the subject of scholarly discourse and theory.

Norse and German Mythology Myth is the foundation of life; it is the timeless pattern, the religious formula to which life shapes itself…Whereas in the life of mankind the mythical represents an early and primitive stage, in the life of an individual it represents a late and mature one. -- Thomas Mann The following list came from a dozen or so sources, including translations of the Eddas. Where applicable comparisons with Greek and Roman deities appear. For a brief discussion of gods and archetypes see my Celtic Deities page. Those of us with a German or Norse ethnic background have sometimes felt reluctant to look more deeply into our mythologies. In part this is because they are associated with conquest, and in part because the Nazis trashed them in their attempt to regress to the thought patterns of an earlier time.

Sundial SSW facing, vertical declining sundial on Moot Hall, Aldeburgh, Suffolk, England. A combined analemmatic-equatorial sundial in Ann Morrison Park in Boise, Idaho, 43°36'45.5"N 116°13'27.6"W A sundial is a device that tells the time of day by the position of the Sun. In common designs such as the horizontal sundial, the sun casts a shadow from its style onto a surface marked with lines indicating the hours of the day. The style is the time-telling edge of the gnomon, often a thin rod or a sharp, straight edge. As the sun moves across the sky, the shadow-edge aligns with different hour-lines. Numbers in Norse mythology The numbers three and nine are significant numbers in Norse mythology and paganism. Both numbers (and multiplications thereof) appear throughout surviving attestations of Norse paganism, in both mythology and cultic practice.[1] While the number three appears significant in many cultures, Norse mythology appears to put special emphasis on the number nine. Along with the number 27, both numbers also figure into the lunar Germanic calendar.[1] Attestations[edit] Three[edit]

The story of Ragnarok and the Apocalypse In Norse mythology, Ragnarok is a series of apocalyptic events that will define the end of the world, where giants of frost and fire will together fight the gods in a final battle that will ultimately destroy the planet, submerging it under water. According to the legend, the world will resurface, the surviving and returning gods will meet, and the world will be repopulated by two human survivors. Brothers will fight and kill each other, sisters' children will defile kinship. It is harsh in the world, whoredom rife —an axe age, a sword age —shields are riven— a wind age, a wolf age— before the world goes headlong. No man will have mercy on another.Dronke (1997:19) Norse mythology is divided in two major groups of gods – the Giants (Jotnar), Aesir, and Vanir.

Stonehenge Archaeologists believe it was built anywhere from 3000 BC to 2000 BC. Radiocarbon dating in 2008 suggested that the first stones were raised between 2400 and 2200 BC,[2] whilst another theory suggests that bluestones may have been raised at the site as early as 3000 BC.[3][4][5] The surrounding circular earth bank and ditch, which constitute the earliest phase of the monument, have been dated to about 3100 BC. The site and its surroundings were added to the UNESCO's list of World Heritage Sites in 1986 in a co-listing with Avebury Henge.