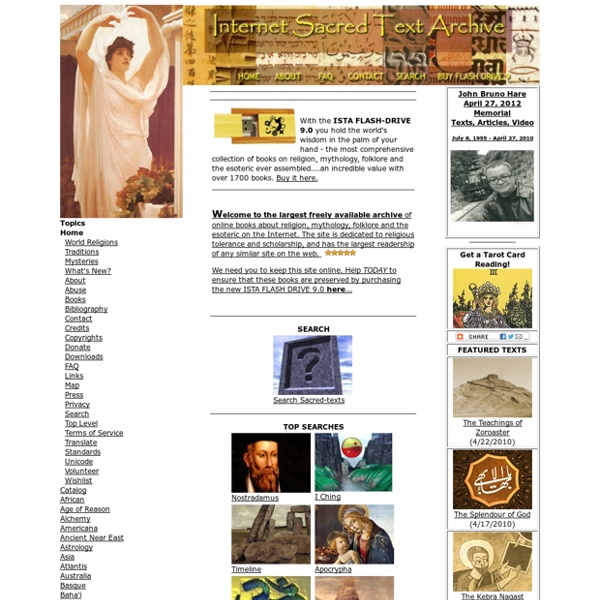 Liber Juratus Honorii, or the Sworn Book of Honorius This done, in the middle of the circles, namely in the center, make a pentagram thus: in the middle of which should be the sign 'Tau', thus: , and above that sign, write the name of God El, and underneath this another name of God, namely, Ely, in this fashion: neural network There are many types of artificial neural networks (ANN). An artificial neural network is a computational simulation of a biological neural network. These models mimic the real life behaviour of neurons and the electrical messages they produce between input (such as from the eyes or nerve endings in the hand), processing by the brain and the final output from the brain (such as reacting to light or from sensing touch or heat).

Gardnerian Book of Shadows Index Sacred Texts Neopaganism Contents Start Reading This is the text of the Gardnerian Book of Shadows. In one sense, this is the central sacred text of the Wicca religion. Online religious book publisher seeks growth By Ramona Turner Posted: 08/11/2009 01:30:08 AM PDT Click photo to enlarge SANTA CRUZ -- When John Bruno Hare first set foot on the UC Santa Cruz campus in 1972 to study linguistics and anthropology, he never thought he'd wind up owning a Web site about world religions.

Hebrews And Vedic Brahmins Dr. Samar Abbas, Aligarh, India EDITORIAL, Jul 14 (VNN) A Review In 1979 the Oriental Institute at Baroda published a paper entitled "The Hebrews belong to a branch of Vedic Aryans." rat smart And that's no dig at Google, according to artificial intelligence researchers Yann LeCun and Josh Tenenbaum. The two spoke at the World Science Festival in New York City after the premier of "The Creator: Alan Turing and the Future of Thinking Machines," a trippy arthouse film about 1940s and 1950s artificial intelligence visionary Alan Turing. The galactic encyclopedia we know as Google is brilliant in many ways — for the amount of information it can absorb and shoot back in response to virtually any kind of question. Still, "It's rote learning; there's no understanding," said LeCun, a professor of computer and neural science at New York University.

LOVE SPELLS Spell Casting Services Love Magic Love Spells Powerf Love Spells – Spells who boost your love life. Today, Love spells can revisit lost lovers, attach wrecked relationships and fetch back an Ex for reuniting purposes; these prevailing Love Spells will make difference in your love life. Cast a Free Love Spell today. Prefer this spell to make the one you craving fall in love with you or to root two other people to fall in love. Some of the Powerful Love Spells are as below : You can choose desired love spells for your needs, Here we offers numerous spells including Lost love spells, Gay love spells, Unconditional love spell, Break up Love Spells with a view to looking at your problems. These days, Love Spells are intending to facilitate you and support you in judgment the correct person in your life and also to augment the bond in among two lovers.

Lao-tzu Biography Who Was Lao-tzu Almost everything we know about Lao-tzu comes from the Historical Records of Ssu-ma Ch'ien. Lao-tzu is also one of the basic characters of the Chuang-tzu's stories - unfortunately they are mostly fiction. According to Ch'ien, Lao-tzu was born in the state of Ch'u, and his birthplace was in the nowadays Ho-nan province. He was a curator at the Royal Library when he met Confucius to talk about rites. ENUMA ELISH Sacred-Texts Ancient Near East ENUMA ELISH THE EPIC OF CREATION L.W. King Translator (from The Seven Tablets of Creation, London 1902) A more complete etext of the Seven Tablets of Creation is also available here. When in the height heaven was not named, And the earth beneath did not yet bear a name, And the primeval Apsu, who begat them, And chaos, Tiamut, the mother of them both Their waters were mingled together, And no field was formed, no marsh was to be seen; When of the gods none had been called into being, And none bore a name, and no destinies were ordained; Then were created the gods in the midst of heaven, Lahmu and Lahamu were called into being... Ages increased,...

Chants, Blessings, Prayers and Charms A Spell to Cast Away Darkness Belisama Fire 2001 In the center of the darkest storm, Is a brilliant rainbow, bright and warm. Look past the darkness that you see, Taoism - Abstract Nan-yung Khu is Granted Instruction by Lao-tzu Read also: > Knowledge Asked the Yellow Emperor> The Characteristics of the Perfect Man> Yin and Yang> The Story of Tung-men Wu> Destiny and Free Will> Note about Tao, by Lionel Giles Nan-yung Khu hereupon took with him some rations, and after seven days and seven nights arrived at the abode of Lao-tzu, who said to him, "Are you come from Khû's?" "I am," was the reply. "And why, Sir, have you come with such a multitude of attendants?" 8 Ancient Writing Systems That Haven't Been Deciphered Yet The Indus Valley civilization was one of the most advanced in the world for more than 500 years, with more than a thousand settlements sprawling across 250,000 square miles of what is now Pakistan and northwest India from 2600 BCE to 1900 BCE. It had several large, well-planned cities like Mohenjo-daro, common iconography—and a script no one has been able to understand. Over at Nature, Andrew Robinson looks at the reasons why the Indus Valley script has been so difficult to crack, and details some recent attempts to decipher it. Since we don't know anything about the underlying language and there's no multilingual Rosetta stone, scholars have analyzed its structure for clues and compared it to other scripts. Most Indologists think it's "logo-syllabic" script like Sumerian cuneiform or Mayan glyphs.