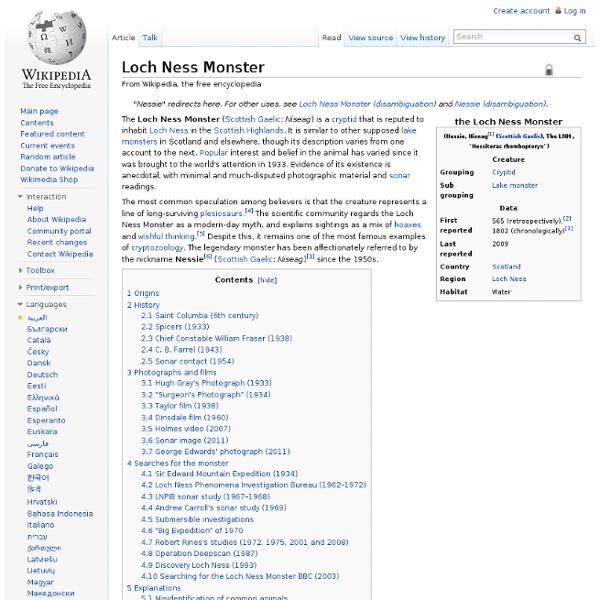 The Loch Ness Monster is a cryptid, a creature whose existence has been suggested but is not discovered or documented by the scientific community.[3] It is reputedly a large unknown animal that inhabits Loch Ness in the Scottish Highlands. It is similar to other supposed lake monsters in Scotland and elsewhere, though its description varies from one account to the next. Popular interest and belief in the animal's existence has varied since it was first brought to the world's attention in 1933. Evidence of its existence is anecdotal, with minimal and much-disputed photographic material and sonar readings. Origins Loch Ness History Saint Columba (6th century) The earliest report of a monster associated with the vicinity of Loch Ness appears in the Life of St. Spicers (1933) In August 1933 a motorcyclist named Arthur Grant claimed to have nearly hit the creature while approaching Abriachan on the north-eastern shore, at about 1 a.m. on a moonlit night. Chief Constable William Fraser (1938) C.

Mothman Mothman is the name of a cryptid speculated to exist after several reports of unidentified creatures seen in the Point Pleasant area of West Virginia from November 15, 1966, to December 15, 1967. The first newspaper report was published in the Point Pleasant Register dated November 16, 1966, titled "Couples See Man-Sized Bird ... Creature ... Something".[1] The being subsequently entered regional folklore. Mothman was introduced to a wider audience by Gray Barker in 1970,[2][3] and later popularized by John Keel in his 1975 book The Mothman Prophecies, claiming that there were supernatural events related to the sightings, and a connection to the collapse of the Silver Bridge. History[edit] On November 12, 1966, five men who were digging a grave at a cemetery near Clendenin, West Virginia, claimed to see a man-like figure fly low from the trees over their heads.[5] This is often identified as the first known sighting of what became known as the Mothman. Analysis[edit] Popular culture[edit]

Loch Ness Monster: Facts About Nessie Though there are dozens, if not hundreds, of lake monsters around the world, one superstar marine denizen outshines them all: Nessie, the beast said to inhabit Scotland's Loch Ness. Some say it's a myth; others say it's a living dinosaur or even a sea serpent that swam into the lake before it became landlocked. Whether real or fictional, it is what Scotland is best known for around the world (aside from whiskey, bagpipes and kilts). Some claim that the Loch Ness monster was first reported in A.D. 565, when — according to Catholic legend — St. The first purported photo of Nessie was published in The Daily Mail on April 21, 1934.Credit: The Daily Mail In fact, there are no reports of the beast until less than a century ago. Civic pride In 2010, archives shed some light on how seriously some locals took the monster. Like other reputed lake monsters around the world, those who are convinced that Nessie exists have tried to pass legal measures to protect them. Elusive beast Related:

Urquhart Castle Urquhart Castle ( listen ; Scottish Gaelic: Caisteal na Sròine) sits beside Loch Ness in the Highlands of Scotland. The castle is on the A82 road, 21 kilometres (13 mi) south-west of Inverness and 2 kilometres (1.2 mi) east of the village of Drumnadrochit. The present ruins date from the 13th to the 16th centuries, though built on the site of an early medieval fortification. Founded in the 13th century, Urquhart played a role in the Wars of Scottish Independence in the 14th century. It was subsequently held as a royal castle, and was raided on several occasions by the MacDonald Earls of Ross. The castle, situated on a headland overlooking Loch Ness, is one of the largest in Scotland in area.[2] It was approached from the west and defended by a ditch and drawbridge. History[edit] Early Middle Ages[edit] The early castle[edit] The remains of the 13th-century "shell keep" or motte is the earliest part of the castle to survive The Grants[edit] The Grant Tower viewed from Loch Ness

Caledonian Canal The Caledonian Canal is a canal in Scotland that connects the Scottish east coast at Inverness with the west coast at Corpach near Fort William. It was constructed in the early nineteenth century by engineer Thomas Telford, and is a sister canal of the Göta Canal in Sweden, also constructed by Telford. Route[edit] History[edit] The canal was conceived as a way of providing much-needed employment to the Highland region. The first survey for a canal was carried out by James Watt in 1773, but it was the Caledonian Canal Commission that paved the way for the actual construction.[2] On 27 July 1803, an Act of Parliament was passed to authorise the project,[4] and the canal engineer Thomas Telford was asked to survey, design and build the waterway. Operation[edit] The canal is now a Scheduled Ancient Monument, and attracts over half a million visitors each year. Names[edit] Points of interest[edit] References[edit] Bibliography[edit] Cameron, A. External links[edit] Coordinates:

Loch Ness and Loch Ness Monster Information. Facts about Nessie, Loch Ness Research and Exploration Chupacabra The chupacabra (Spanish pronunciation: [tʃupaˈkaβɾa], from chupar "to suck" and cabra "goat", literally "goat sucker") is a legendary cryptid rumored to inhabit parts of the Americas, with the first sightings reported in Puerto Rico. The name comes from the animal's reported habit of attacking and drinking the blood of livestock, especially goats. Physical descriptions of the creature vary. It is purportedly a heavy creature, the size of a small bear, with a row of spines reaching from the neck to the base of the tail. Eyewitness sightings have been claimed as early as 1995 in Puerto Rico, and have since been reported as far north as Maine, and as far south as Chile, and even being spotted outside the Americas in countries like Russia and The Philippines, but many of the reports have been disregarded as uncorroborated or lacking evidence. History Possible origin Radford divided the chupacabra reports into two categories: Reported sightings Appearance

Scottish Myths and Legends When the Scots emigrated from Ireland, they brought with them a rich blending of belief and tradition based on Celtic myths and legends and Celtic Christianity. Isolated in the islands and highlands, uniquely powerful and superstitious Scottish legends and myths developed in which tradition and a very strong belief in the "second sight" and the faery world predominated. This worldview persisted well into the 20th century (and, we're sure, continues its influence to this day). The result was a culture circumscribed by ritual - each and every day had its ritual elements (how to stir the pot, how to lead the cows, how to celebrate the feasts and saints' days), designed to ensure good luck and blessings and to avoid tragedy. One of the most common elements of Scottish precognition is seeing the dead before they die (ie, knowing who is going to die soon). It's hard to know what to make of all this. Visit our History of Halloween page to learn about the celtic origins of Halloween.

Loch Ness and Glen Affric Select area Nessie, the legendary monster, has made Loch Ness the most famous of all Scotland's lochs; at twenty three miles long it is the second largest lake in Britain by area. Its great depth, however, means it holds several times more water than its nearest rival, Loch Lomond. There are many shorter and beautiful woodland walks on either side of the loch. To the east is the fertile Black Isle, packed with beautiful villages and some fine beaches, whilst further north still is Dingwall, a gateway to the Northern Highlands. Map of Loch Ness region derived from SVG map of Scotland by Eric Gaba; licenced under CCSA.

Neptune's Staircase Neptune's Staircase (grid reference NN113769) is a staircase lock comprising eight locks on the Caledonian Canal. Built by Thomas Telford beteeen 1803 and 1822, it is the longest staircase lock in Britain. The system was originally hand-powered but has been converted to hydraulic operation. Description[edit] Neptune’s Staircase at Banavie, near Fort William just north of Loch Linnhe is kept by British Waterways. The current lock gates weigh 22 tons each, and require a team of three lock-keepers (at minimum) to run the staircase. Prior to mechanisation, the locks were operated by capstans, each with four poles, which had to make seven full revolutions to open or close a gate. History[edit] The Caledonian Canal was conceived by the engineer Thomas Telford after he was asked by the government to look at measures which might stem emigration from the Highlands. In order to obtain rubble-stone for the building of the Banavie locks, a quarry was opened at Corpach moss. See also[edit] Coordinates:

Walkhighlands: Scotland walks and accommodation List of cryptids The following is a list of cryptids, animals and plants studied under the field of cryptozoology. Their presumptive existence has often been derived from anecdotal or other evidence considered insufficient by mainstream science. The status of cryptids on this list falls into six categories: Unconfirmed – cryptids whose existence is alleged but not demonstrated.Disputed – cryptids that have a body of evidence against their existence.Proposed [animal name] – cryptids with an alternative explanation accepted by the general scientific community.Extinct – animals that are generally believed to be extinct, but which cryptozoologists believe may have an extant relict population.Confirmed [animal name or cause] – animals once classified as cryptids but whose existence has now been confirmed.Hoax – cryptids once thought to be real but later conclusively proven to be hoaxes. Cryptids[edit] See also[edit] Notes[edit] References[edit] Jump up ^ Posted by Velociman at June 8, 2004 9:27 PM (2004-06-08).

Scottish Folktales / Celtic Fairy Tales Legends from Scotland - Compass Rose Cultural Crossroads by Anonymous (1889) Originally published as Folk-lore and Legends Scotland The folktales in this collection come from Folk-lore and Legends Scotland, published by W. W. Gibbings, 18 BURY ST., LONDON, 1889. Contents: Many fine collections of Scottish folktales, fairy tales, and myths have been published over the years. You are free to use the folktales and legends in this online collection on your own Web site as long as you credit Compass Rose Cultural Crossroads as the source and provide a link to our Web site: