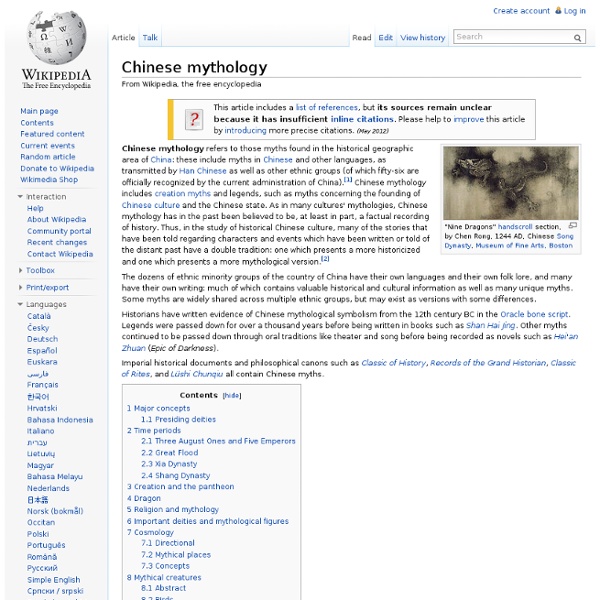 Chinese mythology refers to those myths found in the historical geographic area of China: these include myths in Chinese and other languages, as transmitted by Han Chinese as well as other ethnic groups (of which fifty-six are officially recognized by the current administration of China).[1] Chinese mythology includes creation myths and legends, such as myths concerning the founding of Chinese culture and the Chinese state. As in many cultures' mythologies, Chinese mythology has in the past been believed to be, at least in part, a factual recording of history. Thus, in the study of historical Chinese culture, many of the stories that have been told regarding characters and events which have been written or told of the distant past have a double tradition: one which presents a more historicized and one which presents a more mythological version.[2] Historians have written evidence of Chinese mythological symbolism from the 12th century BC in the Oracle bone script. Major concepts[edit]

Canaanite religion Canaanite religion is the name for the group of Ancient Semitic religions practiced by the Canaanites living in the ancient Levant from at least the early Bronze Age through the first centuries of the Common Era. Canaanite religion was polytheistic, and in some cases monolatristic. Beliefs[edit] Pantheon[edit] Ba'al with raised arm, 14th-12th century BC, found at Ras Shamra (ancient Ugarit), Louvre A great number of deities were worshiped by the followers of the Canaanite religion; this is a partial listing: Afterlife; Cult of the Dead[edit] Cosmology[edit] So far, none of the inscribed tablets found in 1929 in the Canaanite city of Ugarit (destroyed ca. 1200 BC) has revealed a cosmology. From the union of El Elyon and his consort were born Uranus (Pronounced Oo(as in room)-ran-aws) and Ge (Pronounced Yee), Greek names for the "Heaven" and the "Earth". Mythology[edit] History[edit] The Canaanites[edit] Some[who?] Influences[edit] Contact with other areas[edit] Hebrew Bible[edit] Sources[edit]