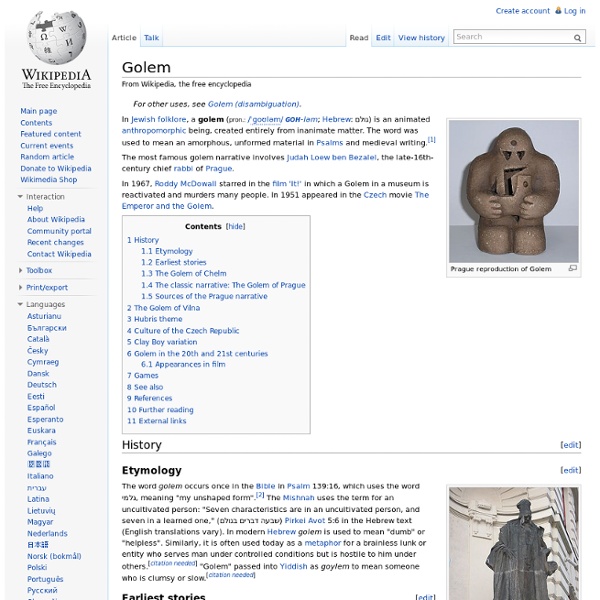 Prague reproduction of Golem In Jewish folklore, a golem (/ˈɡoʊləm/ GOH-ləm; Hebrew: גולם‎) is an animated anthropomorphic being, created entirely from inanimate matter. The word was used to mean an amorphous, unformed material (usually out of stone and clay) in Psalms and medieval writing.[1] The most famous golem narrative involves Judah Loew ben Bezalel, the late-16th-century rabbi of Prague. There are many tales differing on how the Golem was brought to life and afterwards controlled. History[edit] Etymology[edit] The word golem occurs once in the Bible in Psalms 139:16, which uses the word גלמי (galmi; my golem),[2] meaning "my unshaped form",[3] connoting the unfinished human being before God’s eyes.[2] The Mishnah uses the term for an uncultivated person: "Seven characteristics are in an uncultivated person, and seven in a learned one," (שבעה דברים בגולם) (Pirkei Avot 5:6 in the Hebrew text; English translations vary). Earliest stories[edit] The Golem of Chelm[edit] Hubris theme[edit]

G is for Golem Image is a photo of a statue depicting the Prague golem. Taken from The golem is a creature of Jewish folklore. In many tales, the golem has magic words inscribed on its head to bring it to life. It is said that golems must rest on the Sabbath or they will go beserk. According to The Ultimate Encyclopedia of Mythical Creatures, the rabbi who created a golem would often be punished for attempting to "play God." Golems in Books and Other Media: The mythical golem is viewed as a sign of wisdom and holiness, revered as a savior for the persecuted Jews, and also can be seen as a sign of reaching beyond one's natural limits. References

Background on the Golem Legends In order to understand Golem by David Wisniewski it is useful to read some of the research and writings about this very old legend and the issues connected to it. The story has connections to Jewish mysticism while also possessing a long thread in fictional literature. The excerpts provided below help to frame your understanding of this legend and the additional readings serve to fill out any gaps remaining. Cabala (Hebrew, "received tradition"), generically, Jewish mysticism in all its forms; specifically, the esoteric theosophy that crystallized in 13th-century Spain and Provence, France, around Sefer ha-zohar (The Book of Splendor), referred to as the Zohar, and generated all later mystical movements in Judaism. In Jewish legend, an image or form that is given life through a magical formula. From: Entry on "Golem" in Microsoft Encarta 97 Encyclopedia Deluxe Edition, c. 1993-1996 Microsoft Corporation, Disc 1. From: "Golem" entry in the Encyclopedia Judaica. . . . . . . Basso, Eric.

Legend of the Golem of Prague | Quirky Travel My own photo of a Prague Golem One of the best reasons to go on a Prague city break has to be to see the traces of the Golem legend. Golem is inescapable – from figurines to books to t-shirts, street decoration and a Golem restaurant and cafe, the myth lives on in this quirky city. Although the most famous Golem, Prague’s was certainly not the first. Prague’s Golem was created by Rabbi Judah Loew ben Bezalel from clay in the 16th century to protect the Jewish community from antisemitic attacks and possible expulsion from their homeland. Old New Synagogue – Photo by eve@eveandersson.com The lifeless monster was then removed to the attic of the Old New Synagogue (Altneuschul) and, according to rumour, attacked and ripped apart Nazi soldiers who broke into the building. Although the synagogue isn’t keen on the public entering the attic, there was an investigation into whether the remains where there, just in the last five years or so, and was reported in the Fortean Times. Souvenir shops Cafes

The Golem: Jewish Mythology or Kabbalistic Robot? On Sunday night “The Amazing Race” whittled down from 4 teams to the final 3 in a race around the world. This leg of the race took place entirely in Prague, Czech Republic. As is customary on The Amazing Race, the roadblocks and detours along the way were part of the local culture. One cannot speak of Prague without mentioning the great Maharal, Rabbi Judah Loew. The racers were to cover a straw and wood golem with clay and bring the golem to the Old New Synagogue in Prague to receive their next clue. Did you notice the way they describe a golem? “Teams will delve into Prague lore and Jewish Mythology by building a golem, a figure made of straw and clay that was constructed to protect the Jewish Quarter in the 15th Century.” I would probably take offense to a miraculous biblical narrative being called mythology. But when the golem was branded mythology I did not even flinch. Why? Because of an article that was brought to my attention by Rabbi Adlerstein. The article is here.