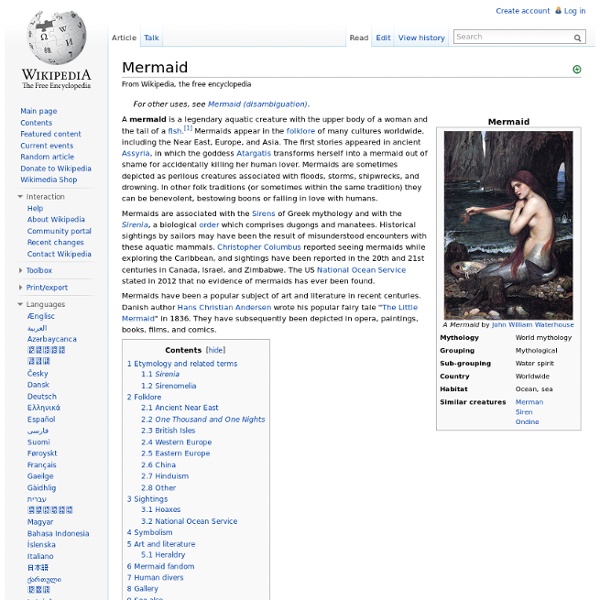 Proserpina Ancient Roman goddess Cult and myths[edit] Origin as Libera[edit] Libera was officially identified with Proserpina in 205 BC, when she acquired a Romanised form of the Greek mystery rites and their attendant mythology. Cult[edit] Myths[edit] In another version of the story, Proserpina ate only four pomegranate seeds, and she did so of her own accord. In the autumn Ceres changes the leaves to shades of brown and orange (her favorite colors) as a gift to Proserpina before she has to return to the underworld. Orpheus and Eurydice[edit] The most extensive myth of Proserpina in Latin is Claudian's (4th century CE). In artwork[edit] In astronomy[edit] 26 Proserpina is a Main belt asteroid 95.1 kilometres (59.1 mi) in diameter, which was discovered by Robert Luther in 1853. See also[edit] Notes[edit] Further reading[edit] Frazer, James George (1911). ... External links[edit]

Angel Supernatural being in various religions and mythologies The Harmony between Religion and Science, a ceiling fresco of the Marble Hall at Seitenstetten Abbey (Lower Austria) by Paul Troger, 1735 Etymology[edit] The word angel arrives in modern English from Old English engel (with a hard g) and the Old French angele.[7] Both of these derive from Late Latin angelus (literally "messenger"), which in turn was borrowed from Late Greek ἄγγελος angelos,[8]. Additionally, per Dutch linguist R. The rendering of "ángelos" is the Septuagint's default translation of the Biblical Hebrew term mal’ākh, denoting simply "messenger" without connoting its nature. Abrahamic religions[edit] Judaism[edit] The Torah uses the (Hebrew) terms מלאך אלהים (mal'āk̠ 'ĕlōhîm; messenger of God), מלאך יהוה (mal'āk̠ YHWH; messenger of the Lord), בני אלהים (bənē 'ĕlōhîm; sons of God) and הקודשים (haqqôd̠əšîm; the holy ones) to refer to beings traditionally interpreted as angels. ... For all forces are angels! Islam[edit]

Beelzebub "Baalzebub" redirects here. For the genus of spider, see Ray spider. "Beelzebub and them that are with him shoot arrows" from John Bunyan's The Pilgrim's Progress (1678) Beelzebub or Beel-Zebub (/biːˈɛlzɨbʌb/ bee-EL-zə-bub or /ˈbiːlzɨbʌb/ BEEL-zə-bub; Hebrew: בַּעַל זְבוּב‎, Baʿal Zəvûv; Arabic: بعل الذباب‎, Ba‘al adh-Dhubāb) is a contemporary name for the devil. In later[when?] In Christian demonology, he is one of the seven princes of Hell according to Catholic views on Hell. Hebrew Bible[edit] The source for the name Beelzebub is in 2 Kings 1:2-3, 6, 16. Scholars should not be divided, in regard to the god of Ekron, between the belief that zebub may be the original affix to Baal and that it is a substitute for an original zbl which, after the discoveries of Ras Shamra, has been connected with the title of "prince", frequently attributed to Baal in mythological texts. Testament of Solomon[edit] New Testament[edit] In Arabic,[where?] Gnostic tradition[edit] Christian tradition[edit]

Chapter 103 Bwv 201 – The Cantatas of Johan Sebastian Bach Download in Microsoft Word format Hurry, whirling winds: The contest between Phoebus and Pan. Chorus–recit (bass/sop)–aria (sop)–recit (alto/bass)–aria (bass)–recit (sop/bass)–aria (bass)–recit (alto/tenor)–aria (tenor)–recit (bass/tenor)–aria (tenor)–recit (sop/alto/tenor/bass)–aria (alto)–recit (sop)–chorus. A musical drama for Zimmermann’s coffee garden. In 1737 Bach suffered a strongly worded attack upon his ‘outdated’ compositional style by the composer and critic Johann Adolph Scheibe, through the publication Criticus Musicus. It would be tempting to claim that Bach composed the Contest between Phoebus and Pan, C 201, as a direct response to, or refutation of, these comments, but it seems not to have been the case. Nevertheless, it might be claimed that Bach was foresighted and prescient about the artistic problems of changing styles and it seems certain that this work was revived in the 1730s and 40s as a direct result of the ongoing debate. Chorus. Opening theme, strings. Chorus.

Michelangelo Michelangelo (1475-1564) was a sculptor, painter and architect widely considered to be one of the greatest artists of the Italian Renaissance period—and arguably of all time. His work demonstrated a blend of psychological insight, physical realism and intensity never before seen. His contemporaries recognized his extraordinary talent, and Michelangelo received commissions from some of the most wealthy and powerful men of his day, including popes and others affiliated with the Catholic Church. Michelangelo: Early Life and Training Michelangelo Buonarroti (Michelangelo di Lodovico Buonarroti Simoni) was born on March 6, 1475, in Caprese, Italy. Florence during the Renaissance period was a vibrant arts center, an opportune locale for Michelangelo’s innate talents to develop and flourish. Michelangelo: The Pieta and David Michelangelo and the Sistine Chapel Ceiling Michelangelo: Architecture, Poetry, Morality From the 1530s on, Michelangelo wrote poems; about 300 survive.

Michelangelo | Biography, Facts, & Accomplishments Michelangelo, in full Michelangelo di Lodovico Buonarroti Simoni, (born March 6, 1475, Caprese, Republic of Florence [Italy]—died February 18, 1564, Rome, Papal States), Italian Renaissance sculptor, painter, architect, and poet who exerted an unparalleled influence on the development of Western art. Top Questions What is Michelangelo best known for? The frescoes on the ceiling of the Sistine Chapel (1508–12) in the Vatican, which include the iconic depiction of the creation of Adam interpreted from Genesis, are probably the best known of Michelangelo’s works today, but the artist thought of himself primarily as a sculptor. His famed sculptures include the David (1501), now in the Accademia in Florence, and the Pietà (1499), now in St. Why is Michelangelo so famous? Michelangelo first gained notice in his 20s for his sculptures of the Pietà (1499) and David (1501) and cemented his fame with the ceiling frescoes of the Sistine Chapel (1508–12). What was Michelangelo like as a person?

Michelangelo Italian sculptor, painter, architect (1475–1564) Michelangelo di Lodovico Buonarroti Simoni (Italian: [mikeˈlandʒelo di lodoˈviːko ˌbwɔnarˈrɔːti siˈmoːni]; 6 March 1475 – 18 February 1564), known best as simply Michelangelo ([1]), was an Italian sculptor, painter, architect and poet of the High Renaissance born in the Republic of Florence, who exerted an unparalleled influence on the development of Western art. His artistic versatility was of such a high order that he is often considered a contender for the title of the archetypal Renaissance man, along with his rival, the fellow Florentine, Leonardo da Vinci.[2] Several scholars have described Michelangelo as the greatest artist of his age and even as the greatest artist of all time.[3][4] Michelangelo was the first Western artist whose biography was published while he was alive.[2] In fact, two biographies were published during his lifetime. Contents Life Early life, 1475–1488 Apprenticeships, 1488–1492 Florence, 1499–1505 Rome, 1534–1546

Aeschylus ancient Athenian tragic playwright Aeschylus (,[1] ;[2] Greek: Αἰσχύλος Aiskhylos, pronounced [ai̯s.kʰý.los]; c. 525/524 – c. 456/455 BC) was an ancient Greek tragedian. He is often described as the father of tragedy.[3][4] Academics' knowledge of the genre begins with his work,[5] and understanding of earlier tragedies is largely based on inferences from his surviving plays.[6] According to Aristotle, he expanded the number of characters in the theatre and allowed conflict among them; characters previously had interacted only with the chorus.[nb 1] Life[edit] Aeschylus was born in c. 525 BC in Eleusis, a small town about 27 kilometers northwest of Athens, which is nestled in the fertile valleys of western Attica,[10] though the date is most likely based on counting back forty years from his first victory in the Great Dionysia. In 510 BC, when Aeschylus was 15 years old, Cleomenes I expelled the sons of Peisistratus from Athens, and Cleisthenes came to power. Death[edit] Works[edit] Sir J.

Lady Macbeth character in Macbeth According to some genealogists, King Duncan's wife was Lady Macbeth's grandmother where Duncan's wife had a stronger claim to the throne than Lady Macbeth. It was this that incited her jealousy and hatred of Duncan. The character's origins lie in the accounts of Kings Duff and Duncan in Holinshed's Chronicles (1587), a history of Britain familiar to Shakespeare. Lady Macbeth is a powerful presence in the play, most notably in the first two acts. Analysts see in the character of Lady Macbeth the conflict between femininity and masculinity as they are impressed in cultural norms. The role has attracted countless notable actors over the centuries, including Sarah Siddons, Charlotte Melmoth, Helen Faucit, Ellen Terry, Jeanette Nolan, Vivien Leigh, Simone Signoret, Vivien Merchant, Glenda Jackson, Francesca Annis, Judith Anderson, Dame Judi Dench, Renee O'Connor, Keeley Hawes, Alex Kingston, Marion Cotillard, and Hannah Taylor-Gordon. Origins[edit] Role in the play[edit]

Paul Gavarni Gavarni by Émile Boilvin, from a self-portrait Self portrait by Gavarni. A Parisian dandy, watercolour by Gavarni. Paul Gavarni was the nom de plume of Sulpice Guillaume Chevalier (13 January 1804, Paris – 24 November 1866),[1] a French illustrator, born in Paris. Early career[edit] Nom-de-plume[edit] The story is told that he took his name from Gavarnie in Luz-Saint-Sauveur where he had taken a journey into the Pyrenees.[2] His first published drawings were for the magazine Journal des modes.[3] At the time, Gavarni was barely thirty years of age. Gavarni followed his interests, and began a series of lithographed sketches in which he portrayed the most striking characteristics, foibles and vices of the various classes of French society. Publications[edit] Most of his best work appeared in Le Charivari. Some of his most scathing and most earnest pictures, the fruit of a visit to London, appeared in L'Illustration.[4] He also illustrated Honoré de Balzac's novels, and Eugène Sue's Wandering Jew.

Sphinx A sphinx (Ancient Greek: Σφίγξ [spʰíŋks], Boeotian: Φίξ [pʰíːks], plural sphinxes or sphinges) is a mythical creature with the head of a human and the body of a lion. In Greek tradition, it has the head of a human, the haunches of a lion, and sometimes the wings of a bird. It is mythicised as treacherous and merciless. Those who cannot answer its riddle suffer a fate typical in such mythological stories, as they are killed and eaten by this ravenous monster.[1] This deadly version of a sphinx appears in the myth and drama of Oedipus.[2] Unlike the Greek sphinx, which was a woman, the Egyptian sphinx is typically shown as a man (an androsphinx (Ancient Greek: Ανδρόσφιγξ)). In European decorative art, the sphinx enjoyed a major revival during the Renaissance. Sphinxes depictions are generally associated with architectural structures such as royal tombs or religious temples. Egypt[edit] Great Sphinx before clearance, Brooklyn Museum Archives Back of the Great Sphinx, Giza, Egypt WikiMiniAtlas

Geschwinde, ihr wirbelnden Winde, BWV 201 Apollo with the lyre, having defeated Pan in musical competition, with Pan's flute under his foot; sculpture in the Schlossgarten of Schwerin, Germany, 1720 History[edit] The cantata was a commission for a middle-class Collegium Musicum which held its concerts in the Zimmermannsches Kaffeehaus in Leipzig. The work was likely performed again in the late 1730s and in 1749, both in Leipzig.[2] Text[edit] The cantata text uses the ancient myth of a musical contest between Phoebus-Apollo and Pan as a comment to a controversy between Bach's contemporaries about "popular" and "learned" music, the first being represented by Pan, the latter by Apollo. Scoring and structure[edit] The piece has 15 movements, as follows: Recordings[edit] J.S. References[edit] External links[edit]

Rembrandt 17th-century Dutch painter and printmaker Rembrandt Harmenszoon van Rijn (/ˈrɛmbrænt, -brɑːnt/;[2] Dutch: [ˈrɛmbrɑnt ˈɦɑrmə(n)soːn vɑn ˈrɛin] ( listen); July 15, 1606[1] – October 4, 1669) was a Dutch draughtsman, painter and printmaker. An innovative and prolific master in three media,[3] he is generally considered one of the greatest visual artists in the history of art and the most important in Dutch art history.[4] Unlike most Dutch masters of the 17th century, Rembrandt's works depict a wide range of style and subject matter, from portraits and self-portraits to landscapes, genre scenes, allegorical and historical scenes, biblical and mythological themes as well as animal studies. Rembrandt never went abroad, but he was considerably influenced by the work of the Italian masters and Netherlandish artists who had studied in Italy, like Pieter Lastman, the Utrecht Caravaggists, and Flemish Baroque Peter Paul Rubens. Life[edit] As a boy he attended Latin school. Works[edit] Etchings[edit]

Andromeda Chained to the Rocks Andromeda Chained to the Rocks (1630) is a 34 x 25 oil on panel painting by the Dutch Golden Age painter Rembrandt. It is now in the Mauritshuis, The Hague, Netherlands. Andromeda represents Rembrandt's first full length mythological female nude history painting and is taken from a story in Ovid's Metamorphoses. Mythology[edit] Damsel in distress[edit] This painting depicts a classic example of the damsel in distress. Depiction of beauty[edit] Other Depictions of Andromeda Perseus Freeing Andromeda by Rubens Notes[edit] ^ Ovid, book iv, myth ix.^ Clark, p. 11. References[edit] Ovid, Translated by A.D.