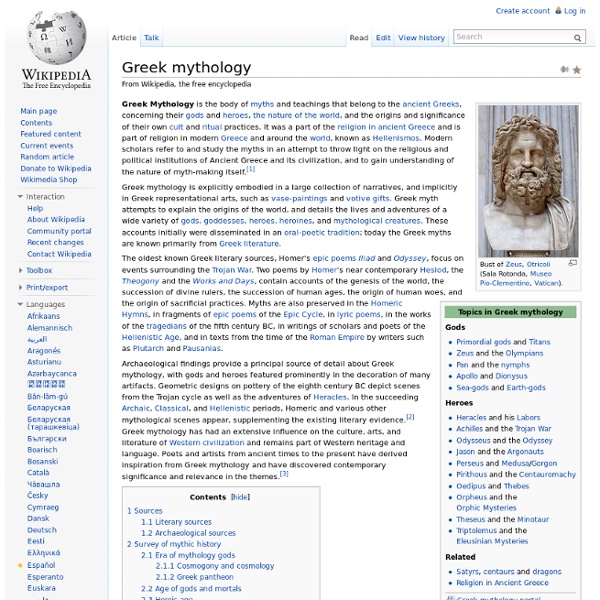 Greek mythology is explicitly embodied in a large collection of narratives, and implicitly in Greek representational arts, such as vase-paintings and votive gifts. Greek myth attempts to explain the origins of the world, and details the lives and adventures of a wide variety of gods, goddesses, heroes, heroines, and mythological creatures. These accounts initially were disseminated in an oral-poetic tradition; today the Greek myths are known primarily from Greek literature. Archaeological findings provide a principal source of detail about Greek mythology, with gods and heroes featured prominently in the decoration of many artifacts. Geometric designs on pottery of the eighth century BC depict scenes from the Trojan cycle as well as the adventures of Heracles. Sources Literary sources The poetry of the Hellenistic and Roman ages was primarily composed as a literary rather than cultic exercise. Archaeological sources Survey of mythic history Origins of the world and the gods

Hestia Origins and cults[edit] Hestia's name means "home and hearth", the oikos, the household, house, or family. . "An early form of the temple is the hearth house; the early temples at Dreros and Prinias on Crete are of this type as indeed is the temple of Apollo at Delphi which always had its inner hestia"[3] The Mycenaean great hall, such as the hall of Odysseus at Ithaca was a megaron, which had a central hearth. Likewise, the hearth of the later Greek prytaneum was the community and government's ritual and secular focus.

Religion in ancient Greece Many Greek people recognized the major (Olympian) gods and goddesses: Zeus, Poseidon, Hades, Apollo, Artemis, Aphrodite, Ares, Dionysus, Hephaestus, Athena, Hermes, Demeter, Hestia, and Hera though philosophies such as Stoicism and some forms of Platonism used language that seems to posit a transcendent single deity. Different cities often worshiped the same deities, sometimes with epithets that distinguished them and specified their local nature. The religious practices of the Greeks extended beyond mainland Greece, to the islands and coasts of Ionia in Asia Minor, to Magna Graecia (Sicily and southern Italy), and to scattered Greek colonies in the Western Mediterranean, such as Massalia (Marseille). Greek religion was tempered by Etruscan cult and belief to form much of the later Ancient Roman religion.

Family tree of the Greek gods Greek cosmological entities Essential Olympians and Titans The essential Olympians' names are given in bold font. See also List of Greek mythological figures Pan (god) In Greek religion and mythology, Pan (/ˈpæn/;[1] Ancient Greek: Πᾶν, Pān) is the god of the wild, shepherds and flocks, nature of mountain wilds, hunting and rustic music, and companion of the nymphs.[2] His name originates within the Ancient Greek language, from the word paein (πάειν), meaning "to pasture."[3] He has the hindquarters, legs, and horns of a goat, in the same manner as a faun or satyr. With his homeland in rustic Arcadia, he is recognized as the god of fields, groves, and wooded glens; because of this, Pan is connected to fertility and the season of spring. The ancient Greeks also considered Pan to be the god of theatrical criticism.[4]

Pan (god) In Greek religion and mythology, Pan (/ˈpæn/;[1] Ancient Greek: Πᾶν, Pān) is the god of the wild, shepherds and flocks, nature of mountain wilds, hunting and rustic music, and companion of the nymphs.[2] His name originates within the Ancient Greek language, from the word paein (πάειν), meaning "to pasture."[3] He has the hindquarters, legs, and horns of a goat, in the same manner as a faun or satyr. With his homeland in rustic Arcadia, he is recognized as the god of fields, groves, and wooded glens; because of this, Pan is connected to fertility and the season of spring. The ancient Greeks also considered Pan to be the god of theatrical criticism.[4]

Sphinx Perhaps the first sphinx, Queen Hetepheres II from the fourth dynasty (Cairo Museum) A sphinx (Greek: Σφίγξ /sphinx/. Bœotian: Φίξ /Phix) is a mythical creature with, as a minimum, the body of a lion and a human head. In Greek tradition, it has the haunches of a lion, sometimes with the wings of a great bird, and the face of a human. It is mythicised as treacherous and merciless. Those who cannot answer its riddle suffer a fate typical in such mythological stories, as they are killed and eaten by this ravenous monster.[1] This deadly version of a sphinx appears in the myth and drama of Oedipus.[2] Unlike the Greek sphinx which was a woman, the Egyptian sphinx is typically shown as a man (an androsphinx).

Aether (mythology) In Greek mythology, Aether or Aither (Æthere, Ancient Greek: Αἰθήρ, pronounced [aitʰɛ̌ːr]), also known as Akmon or Acmon in Latin (possibly from the same route as "Acme") is one of the primordial deities, the first-born elementals. Aether is the personification of the upper air.[1] He embodies the pure upper air that the gods breathe, as opposed to the normal air (ἀήρ, aer) breathed by mortals. Like Tartarus and Erebus, Aether may have had shrines in ancient Greece, but he had no temples and it is unlikely that he had a cult. Hyginus ... started his Fabulae with a strange hodgepodge of Greek and Roman cosmogonies and early genealogies. It begins as follows: Ex Caligine Chaos. Ex Chao et Caligine Nox Dies Erebus Aether (Praefatio 1).

Golden Age There are analogous concepts in the religious and philosophical traditions of the South Asian subcontinent. For example, the Vedic or ancient Hindu culture saw history as cyclical, composed of yugas with alternating Dark and Golden Ages. The Kali yuga (Iron Age), Dwapara (Bronze Age), Treta yuga (Silver Age) and Satya yuga (Golden Age) correspond to the four Greek ages. Similar beliefs occur in the ancient Middle East and throughout the ancient world, as well.[1]

Uranus (mythology) Uranus imprisoned Gaia's youngest children in Tartarus, deep within Earth, where they caused pain to Gaia. She shaped a great flint-bladed sickle and asked her sons to castrate Uranus. Only Cronus, youngest and most ambitious of the Titans, was willing: he ambushed his father and castrated him, casting the severed testicles into the sea. William Sale remarks that "... Ages of Man The Ages of Man are the stages of human existence on the Earth according to Greek mythology. Both Hesiod and Ovid offered accounts of the successive ages of humanity, which tend to progress from an original, long-gone age in which humans enjoyed a nearly divine existence to the current age of the writer, in which humans are beset by innumerable pains and evils. In the two accounts that survive from ancient Greece and Rome, this degradation of the human condition over time is indicated symbolically with metals of successively decreasing value.[citation needed]

Iliad The Iliad (sometimes referred to as the Song of Ilion or Song of Ilium) is an ancient Greek epic poem in dactylic hexameter, traditionally attributed to Homer. Set during the Trojan War, the ten-year siege of the city of Troy (Ilium) by a coalition of Greek states, it tells of the battles and events during the weeks of a quarrel between King Agamemnon and the warrior Achilles. Although the story covers only a few weeks in the final year of the war, the Iliad mentions or alludes to many of the Greek legends about the siege; the earlier events, such as the gathering of warriors for the siege, the cause of the war, and related concerns tend to appear near the beginning. Then the epic narrative takes up events prophesied for the future, such as Achilles' looming death and the sack of Troy, prefigured and alluded to more and more vividly, so that when it reaches an end, the poem has told a more or less complete tale of the Trojan War.

Achilles In Greek mythology, Achilles (/əˈkɪliːz/; Ancient Greek: Ἀχιλλεύς, Akhilleus, pronounced [akʰillěws]) was a Greek hero of the Trojan War and the central character and greatest warrior of Homer's Iliad. Achilles was said to be a demigod; his mother was the nymph Thetis, and his father, Peleus, was the king of the Myrmidons. Etymology[edit] Achilles' name can be analyzed as a combination of ἄχος (akhos) "grief" and λαός (Laos) "a people, tribe, nation, etc." In other words, Achilles is an embodiment of the grief of the people, grief being a theme raised numerous times in the Iliad (frequently by Achilles). Achilles' role as the hero of grief forms an ironic juxtaposition with the conventional view of Achilles as the hero of kleos (glory, usually glory in war).

Odyssey Greek text of the Odyssey's opening passage The Odyssey (Greek: Ὀδύσσεια, Odýsseia) is one of two major ancient Greek epic poems attributed to Homer. It is, in part, a sequel to the Iliad, the other work ascribed to Homer. The poem is fundamental to the modern Western canon, and is the second oldest extant work of Western literature, the Iliad being the oldest. It is believed to have been composed near the end of the 8th century BC, somewhere in Ionia, the Greek coastal region of Anatolia.[1]

List of legendary creatures (B) From Wikipedia, the free encyclopedia Buraq from a 17th-century Mughal miniature