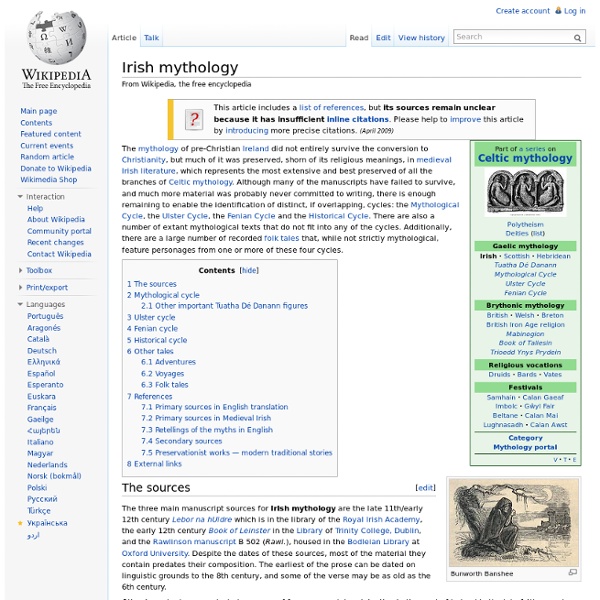 Bunworth Banshee The mythology of pre-Christian Ireland did not entirely survive the conversion to Christianity. However, much of it was preserved in medieval Irish literature, though it was shorn of its religious meanings. The sources[edit] The three main manuscript sources for Irish mythology are the late 11th/early 12th century Lebor na hUidre which is in the library of the Royal Irish Academy, the early 12th century Book of Leinster in the Library of Trinity College, Dublin, and the Rawlinson manuscript B 502 (Rawl.), housed in the Bodleian Library at Oxford University. Other important sources include a group of four manuscripts originating in the west of Ireland in the late 14th or early 15th century: The Yellow Book of Lecan, The Great Book of Lecan, The Book of Hy Many,[1] and The Book of Ballymote. When using these sources, it is, as always, important to question the impact of the circumstances in which they were produced. Mythological cycle[edit] Ulster cycle[edit]

Norse mythology An undead völva, a Scandinavian seeress, tells the spear-wielding god Odin of what has been and what will be in Odin and the Völva by Lorenz Frølich (1895) For the practices and social institutions of the Norse pagans, see Norse paganism Norse mythology, or Scandinavian mythology, is the body of mythology of the North Germanic people stemming from Norse paganism and continuing after the Christianization of Scandinavia and into the Scandinavian folklore of the modern period. The northernmost extension of Germanic mythology, Norse mythology consists of tales of various deities, beings, and heroes derived from numerous sources from both before and after the pagan period, including medieval manuscripts, archaeological representations, and folk tradition. Most of the surviving mythology centers on the plights of the gods and their interaction with various other beings, such as humanity and the jötnar, beings who may be friends, lovers, foes and/or family members of the gods. Sources[edit]

Anglo-Saxon paganism Anglo-Saxon paganism refers to the religious beliefs and practices followed by the Anglo-Saxons between the fifth and eighth centuries AD, during the initial period of Early Medieval England. A variant of the Germanic paganism found across much of north-western Europe, it encompassed a heterogeneous variety of disparate beliefs and cultic practices.[1] Developing from the earlier Iron Age religion of continental northern Europe, it was introduced to Britain following the Anglo-Saxon migration in the mid fifth century, and remained the dominant religion in England until the Christianization of its kingdoms between the seventh and eighth centuries, with some aspects gradually blending into folklore.[citation needed] The right half of the front panel of the seventh century Franks Casket, depicting the pan-Germanic legend of Weyland Smith also Weyland The Smith, which was apparently also a part of Anglo-Saxon pagan mythology. History[edit] Mythology[edit] Cosmology[edit] Deities[edit]

Otherworld The concept of an "otherworld" in historical Indo-European religion is reconstructed in comparative mythology. The term is a calque of orbis alius or "Celtic Otherworld", so named by Lucan in his description of the druidic doctrine of metempsychosis. Comparable religious, mythological or metaphysical concepts, such as a realm of supernatural beings and a realm of the dead, are of course found in cultures throughout the world.[1] Spirits were thought to travel between worlds, or layers of existence, usually along an axis such as a giant tree, a tent pole, a river, a rope or mountains.[1][2][3] Indo-European reconstruction[edit] Celtic[edit] Germanic[edit] Greek[edit] In Greco-Roman mythology the Gods were said to dwell on Mount Olympus whereas the dead usually went to the Underworld or Fortunate Isles after death. References[edit] ^ Jump up to: a b c d e Gods, goddesses, and mythology, Volume 11, C.

Aztec mythology Mictlantecuhtli (left), god of death, the lord of the Underworld and Quetzalcoatl (right), god of wisdom, life, knowledge, morning star, patron of the winds and light, the lord of the West. Together they symbolize life and death. Aztec mythology is the body or collection of myths of Aztec civilization of Central Mexico.[1] The Aztecs were Nahuatl speaking groups living in central Mexico and much of their mythology is similar to that of other Mesoamerican cultures. The Mexica/Aztec were said to be guided by their god Huitzilopochtli, meaning "Left-handed Hummingbird" or "Hummingbird from the South." Creation myth[edit] Huitzilopochtli is raising up the skies of the South, one of the four directions of the world, surrounded by their respective trees, temples, patterns and divination symbols. Because the Aztec adopted and combined several traditions with their own earlier traditions, they had several creation myths. Pantheon[edit] Bibliography[edit] Grisel Gómez Cano (2011). Sources[edit]

Roman mythology Roman mythology is the body of traditional stories pertaining to ancient Rome's legendary origins and religious system, as represented in the literature and visual arts of the Romans. "Roman mythology" may also refer to the modern study of these representations, and to the subject matter as represented in the literature and art of other cultures in any period. The Romans usually treated their traditional narratives as historical, even when these have miraculous or supernatural elements. The stories are often concerned with politics and morality, and how an individual's personal integrity relates to his or her responsibility to the community or Roman state. Heroism is an important theme. When the stories illuminate Roman religious practices, they are more concerned with ritual, augury, and institutions than with theology or cosmogony.[1] The nature of Roman myth[edit] Founding myths[edit] Other myths[edit] Mucius Scaevola in the Presence of Lars Porsenna (early 1640s) by Matthias Stom

Rapa Nui mythology The Rapa Nui mythology, also known as Pascuense mythology or Easter Island mythology, is the name given to the myths, legends and beliefs (before being converted to Christianity) of the native Rapanui people of the island of Rapa Nui (Easter Island), located in the south eastern Pacific Ocean, almost 4,000 kilometres (2,500 mi) from continental Chile. The myth of origin[edit] According to Rapa Nui mythology Hotu Matu'a was the legendary first settler and ariki mau ("supreme chief" or "king") of Easter Island.[1] Hotu Matu'a and his two canoe (or one double hulled canoe) colonising party were Polynesians from the now unknown land of Hiva (probably the Marquesas). Ancestor Cult[edit] The most visible element in the culture was the production of massive statues called moai that represented deified ancestors. The Birdman Cult[edit] Myths of Rapa Nui[edit] References[edit] Further reading[edit] Kjellgren, Eric, et al. (2001).

Greek Gods Family Tree ludios.org Greek mythology Greek mythology is explicitly embodied in a large collection of narratives, and implicitly in Greek representational arts, such as vase-paintings and votive gifts. Greek myth attempts to explain the origins of the world, and details the lives and adventures of a wide variety of gods, goddesses, heroes, heroines, and mythological creatures. These accounts initially were disseminated in an oral-poetic tradition; today the Greek myths are known primarily from Greek literature. Archaeological findings provide a principal source of detail about Greek mythology, with gods and heroes featured prominently in the decoration of many artifacts. Sources Literary sources The poetry of the Hellenistic and Roman ages was primarily composed as a literary rather than cultic exercise. Finally, a number of Byzantine Greek writers provide important details of myth, much derived from earlier now lost Greek works. Archaeological sources Survey of mythic history Origins of the world and the gods

The Hedge Druid: Maps1 – England This is a gazeteer listing information about the sacred sites we have visited and mapped for subtle energies. This page covers the sites in England. Contents:- Arbor Low Location: Near the village of Parsley Hay, Derbyshire Peak District, Northern England. Arbor Low has been called the Stonehenge of the North probably on account of the amount of area it covers and the size of the stones that remain there, although today they are all laying flat. This site is one at which Kal feels particularly energised. Energetic condition : Every time we have visited and dowsed at this site it has been registering as a strong response, The rods swings forcefully, smoothly, directly and precisely here in response to questions. Recumbent stones at Arbor Low Energy types: The site is alive with all kinds of energetic paths and pools – strong neutral alignment leys, radials in abundance, male and female energies dancing up and down the surrounding mound, strong protective female energies atop the mound.