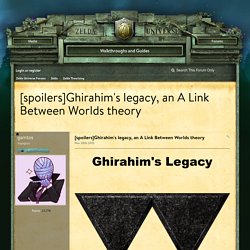 In the last few days I've noticed some shocking things taking place.People were calling Yuga a counterpart of Ganondorf despite obvious disrepanciesThere was mass confusion over Demise's Sword.Some mean people were criticizing the "Top Theorist" part of my awesome signature. Not willing to stand for such travesty, my mind started to concoct the basis of an awesome theory that could eliminate all of that. As I'm writing this, I still haven't quite figured out the fine details of this theory so it's very likely to be flawed, but the theory needs to come out, right here, right now. Good. 1. Now, there are plenty of good reasons to believe that Yuga is a counterpart to Ganondorf, and I must admit I have little arguments against them. Both characters have red hair that has been pulled back and gives a braided impression. Vexrexer's Photostream. 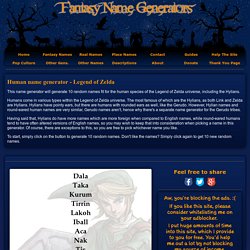 Humans come in various types within the Legend of Zelda universe. The most famous of which are the Hylians, as both Link and Zelda are Hylians. Hylians have pointy ears, but there are humans with rounded ears as well, like the Gerudo. However, Hylian names and round-eared human names are very similar, Gerudo names aren't, hence why there's a separate name generator for the Gerudo tribes. Having said that, Hylians do have more names which are more foreign when compared to English names, while round-eared humans tend to have often altered versions of English names, so you may wish to keep that into consideration when picking a name in this generator. To start, simply click on the button to generate 10 random names. Skyward Sword Original Translations by The Baton of the Wind - Zelda Theorizing - Zelda Universe Forums. Just gonna put this here. 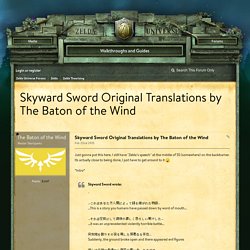 I still have "Zelda's speech" at the middle of SS (somewhere) on the backburner. Its actually close to being done, I just have to get around to it. In Hatred we Join Hands Chapter 10, a legend of zelda fanfic. [Do not adjust your television sets! 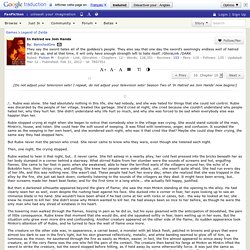 I repeat, do not adjust your television sets! Propane Nightmares Chapter 22: Darkness, a legend of zelda fanfic. Blah blah blah sorry for the wait. 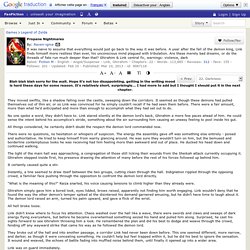 Hope it's not too disappointing, getting in the writing mood is hard these days for some reason. It's relatively short, surprisingly... I had more to add but I thought I should put it in the next chapter. They moved swiftly, like a shadow falling over the castle, sweeping down the corridors. It seemed as though these demons had pulled themselves out of thin air, or so Link was convinced for he simply couldn't recall if he had seen them before. No one spoke a word, they didn't have to. All things considered, he certainly didn't doubt the respect the demon lord commanded now. There were no questions, no hesitation or whispers of suspicion. The light of the main hall was approaching, a congregation of those still licking their wounds from the Sheikah attack currently occupying it. It certainly caused quite a stir. Instantly, a line seemed to draw itself between the two groups, cutting clean through the hall.

Rewriting Twilight Princess: The Most Flawed Narrative of the Zelda Series. Hm. 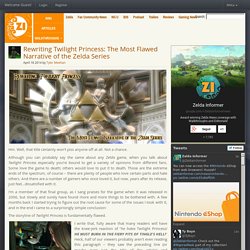 Well, that title certainly won't piss anyone off at all. Not a chance. Although you can probably say the same about any Zelda game, when you talk about Twilight Princess especially you're bound to get a variety of opinions from different fans. Some love the game to death; others would love to put it to death. Those are the extreme ends of the spectrum, of course – there are plenty of people who love certain parts and hate others. I'm a member of that final group, as I sang praises for the game when it was released in 2006, but slowly and surely have found more and more things to be bothered with. The storyline of Twilight Princess is fundamentally flawed. I write that, fully aware that many readers will have the knee-jerk reaction of "he hates Twilight Princess! This new series, for which this article serves as the introduction, is not for those people. Realms of Hyrule. <div class='message error'><strong>Javascript Disabled Detected</strong><p>You currently have javascript disabled. 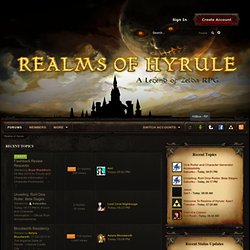 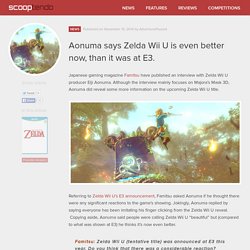 Although the interview mainly focuses on Majora’s Mask 3D, Aonuma did reveal some more information on the upcoming Zelda Wii U title. Referring to Zelda Wii U’s E3 announcement, Famitsu asked Aonuma if he thought there were any significant reactions to the game’s showing. Jokingly, Aonuma replied by saying everyone has been imitating his finger clicking from the Zelda Wii U reveal. Copying aside, Aonuma said people were calling Zelda Wii U “beautiful” but (compared to what was shown at E3) he thinks it’s now even better.

Famitsu: Zelda Wii U (tentative title) was announced at E3 this year. Aonuma also spoke about the giant enemy which chases Link throughout the E3 trailer and hopes to show new things at E3 next year. Zelda Wii U is due to be released sometime in 2015 and has been described as having an “open world” which players can explore from any direction. In this article: Assassin's Creed II - Earth. Extinct ; playlist by mel. Pipit - The Legend of Zelda: Skyward Sword Wiki Guide. Pipit is a Loftwing expert at the Knight Academy and the winner of last year's Loftwing Race, thus his yellow version of Link's classic garment that represents his graduation class in the academy. 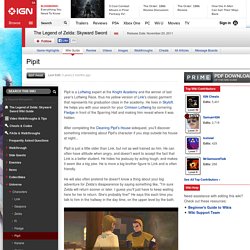 He lives in Skyloft. He helps you with your search for your Crimson Loftwing by cornering Fledge in front of the Sparring Hall and making him reveal where it was hidden. After completing the Cleaning Pipit's House sidequest, you'll discover something interesting about Pipit's character if you stop outside his house at night... Pipit is just a little older than Link, but not as well trained as him. He can often have attitude when angry, and doesn't want to accept the fact that Link is a better student. Nerd Fashion - Legend of Zelda Jewelry. Zelda14-skyward-sword-text-dump. New LoZ art style/appearance? - Wii U Forum - Page 2. Zelda Infinite - Manga. Welcome to the manga translation page! 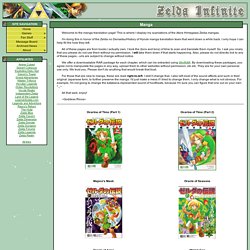 Zelda Legends - Legend of Zelda Comics and Manga. Listed below are some of the many Manga and Comic books based on the Legend of Zelda titles. These books more or less follow the exact storylines of each of the games that they cover. There are however, many differences and they are all noted below each of the Manga. All the Manga are in black and white with nicely illustrated drawings. Remember, the Manga were originally released in Japan.

So when reading them, you have to read, from right to left and top to bottom. Welcome to North Castle - The Vintage Zelda Fan Site!