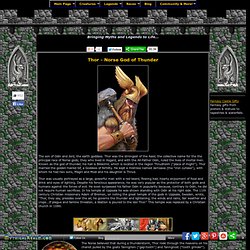 Thor was the strongest of the Aesir, the collective name for the the principal race of Norse gods; they who lived in Asgard, and with the All-Father Odin, ruled the lives of mortal men. Known as the god of thunder, his hall is Bilskirnir, which is located in the region Thrudheim ("place of might"). The Goddess Freyja - Norse Deity. ***According to Norse Mythology - The Myths and Legends of the Nordic Gods by Arthur Cotterell, Freyja is the daughter of the sea god Njord and sister of Freyr. 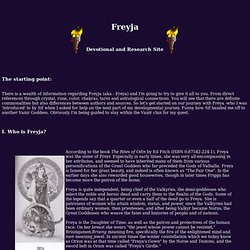 She is an important fertility goddess and a member of the Vanir, one of the 2 branches into which the Germanic gods were divided. After a war the Vanir seem to have been supplanted by the younger Aesir, who were led by Odin. When peace was agreed between the two sides, Njord went with Freyr and Freyja to Asgard, where they lived with the Aesir as a token of friendship. Both Odin and Freyja took an interest in the heroic dead, dividing the slain between them at the end of every battle.