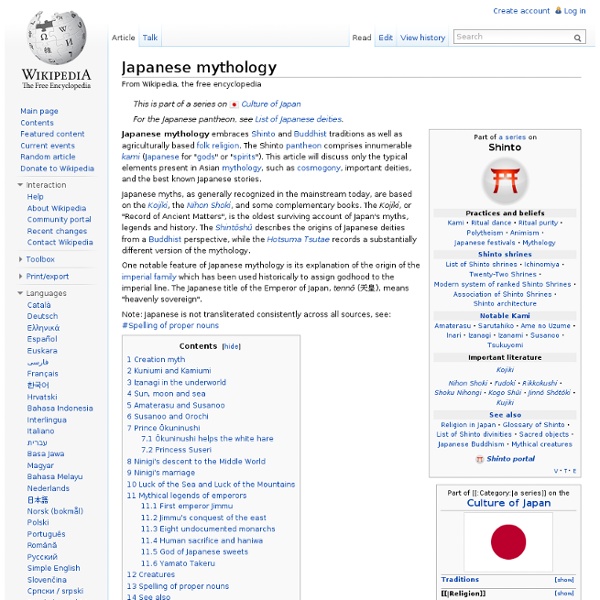 Japanese myths, as generally recognized in the mainstream today, are based on the Kojiki, the Nihon Shoki, and some complementary books. The Kojiki, or "Record of Ancient Matters", is the oldest surviving account of Japan's myths, legends and history. The Shintōshū describes the origins of Japanese deities from a Buddhist perspective, while the Hotsuma Tsutae records a substantially different version of the mythology. One notable feature of Japanese mythology is its explanation of the origin of the imperial family which has been used historically to assign godhood to the imperial line. The Japanese title of the Emperor of Japan, tennō (天皇), means "heavenly sovereign". Note: Japanese is not transliterated consistently across all sources, see: #Spelling of proper nouns Creation myth[edit] In the Japanese creation myth, the first deities which came into existence, appearing at the time of the creation of the universe, are collectively called Kotoamatsukami. Kuniumi and Kamiumi[edit]

PHOTOGRAPHS OF HIROSHIMA AND NAGASAKI (GENSUIKIN) 1. The Huge Atomic Cloud / The Mushroom Cloud Blowing Up The atomic cloud (mushroom cloud) produced just after the burst is one of the most intensive characteristics of the A-bomb explosion. The Hiroshima Meteorological Observatory reported that just after the flash, black smoke rose from the ground up to the sky reaching an altitude of several thousand meters, and covered the whole city. When the fireball disappeared, the angry clouds, like grey smoke, rose and reached an altitude of 8,000 meters in 5 minutes after the explosion. One of the EnolaGay crew recorded in his flight diary, "9:00a.m.....Clouds were observed. Kojiki Kojiki (古事記?, "Record of Ancient Matters") is the oldest extant chronicle in Japan, dating from the early 8th century (711–712) and composed by Ō no Yasumaro at the request of Empress Gemmei.[1] The Kojiki is a collection of myths concerning the origin of the four home islands of Japan, and the Kami. Along with the Nihon Shoki, the myths contained in the Kojiki are part of the inspiration behind Shinto practices and myths, including the misogi purification ritual.[2][3][4][5] Structure[edit] The Kojiki contains various songs/poems. While the historical records and myths are written in a form of Chinese with a heavy mixture of Japanese elements, the songs are written with Chinese characters that are only used to convey sounds.

Shinto Shinto priest and priestess. Shinto (神道, Shintō?), also kami-no-michi,[note 1] is the indigenous religion of Japan and the people of Japan.[2] It is defined as an action-centered religion,[3] focused on ritual practices to be carried out diligently, to establish a connection between present-day Japan and its ancient past.[4] Founded in 660 BC according to Japanese mythology,[5] Shinto practices were first recorded and codified in the written historical records of the Kojiki and Nihon Shoki in the 8th century. Kami Amaterasu, one of the central kami in the Shinto faith Kami (Japanese: 神?) are the spirits or phenomena that are worshipped in the religion of Shinto.

Women protest judicial system after incestuous rapist walks free：The Asahi Shimbun Hundreds of women in Tokyo protested two recent court rulings in which the judges recognized that rapes had occurred but allowed the perpetrators to walk because the victims could have offered more resistance. At a rally called “Standing demonstration protesting sexual violence and sexual violence court rulings” near Tokyo Station on April 11, the demonstrators expressed disgust with the rulings and held signs that read “#MeToo,” “Yes Means Yes!” and “Give judges an education on human rights and sex!” “I am confounded and terrified by the not-guilty rulings,” said Minori Kitahara, a writer and activist. “I am afraid that victims of sexual abuse will not be able to raise their voices after such verdicts were given.” The rulings in March by the Nagoya District Court and the Fukuoka District Court both found the suspects not guilty of “quasi-forcible sexual intercourse.”

List of Japanese deities This is a list of divinities native to Japanese beliefs and religious traditions. Many of these are from Shinto, while others were imported via Buddhism or Taoism and "integrated" into Japanese mythology and folklore. Shinto[edit] The following is a list of some of the major and minor deities in Shinto. It is often said that there are Yaoyorozu-no-Kami (八百万の神, lit. 8 million kami), implying that there are an indefinitely large number. Major kami[edit]

Shintoshu The Shintōshū (神道集?) is a Japanese story book in ten volumes believed to date from the Nanboku-chō period (1336–1392).[1] It illustrates with tales about various shrines the Buddhist honji suijaku theory, according to which Japanese kami were simply local manifestations of the Indian gods of Buddhism. This theory, created and developed mostly by Tendai monks, was never systematized, but was nonetheless very pervasive and very influential.[2] The book had thereafter great influence over literature and the arts.[1] History[edit] The book is believed to have been written during the late Nanboku-chō period, either during the Bunna or the Enbun era.[3] It carries the note Agui-saku (安居院作?

The Children’s Book That Caused Japan’s Raccoon Problem Today, raccoons are a nuisance animal in Japan, rummaging through trash, stealing goods from vendors, feasting on crops and even damaging ancient Japanese temples with their sharp claws and abundant poop. But their invasion started back in 1977, when the kids of Japan were going crazy for a cartoon raccoon named Rascal. He was cute and mischievous and the star of an anime series adaptation of a favorite children’s book, written by American author Sterling North. As Eric Grundhauser over at Atlas Obscura explains, the book, entitled Rascal: A Memoir of a Better Era, was released to western audiences in 1963 and told the story of North’s adventures with his childhood pet raccoon.

In Praise of Shadows: Ancient Japanese Aesthetics and Why Every Technology Is a Technology of Thought – Brain Pickings By Maria Popova At least since Plato’s Allegory of the Cave, we’ve seen shadows as a metaphor for the illusory and wicked aspects of life, for that which we must eradicate in order to illuminate the truth and inherent goodness of existence. And yet we forget that the darkness they cast evidences the light — palpable proof without which we might not appreciate or even notice the radiance itself. The 1933 gem In Praise of Shadows (public library) by Japanese literary titan Junichiro Tanizaki (July 24, 1886–July 30, 1965) belongs to that special order of slim, enormously powerful books that enchant the lay reader with an esoteric subject, leaving a lifelong imprint on the imagination — rare masterpieces like Robin Wall Kimmerer’s love letter to moss and Glenn Kurtz’s paean to the pleasures of playing guitar. Tanizaki, translated here by Thomas J. Harper and Edward G.