This is the official site of The Asatru Community. This site is for all heathens and pagans. Whether they are beginners or masters in the ancient ways. Here you will find helpful info, insight and aid for all those who seek it. Besi. Norse Mythology. The 10 Greatest Norse Gods. Timeless Myths: Norse Mythology. Prayers and Blessings of Odinism. Top Ten Norse Mythology Websites.

Thor and the Midgard Serpent Face it — Norse mythology is more intense, more shadowy and frightening than Greek Mythology. 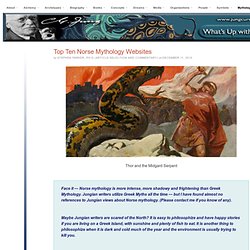 Jungian writers utilize Greek Myths all the time — but I have found almost no references to Jungian views about Norse mythology. (Please contact me if you know of any). Maybe Jungian writers are scared of the North? It is easy to philosophize and have happy stories if you are living on a Greek Island, with sunshine and plenty of fish to eat. I’ve lived Alaska for over thirty years now (winters here are an acquired taste). The Norse Gods. Myths of the Norsemen: From the Eddas and Sagas/Tyr. CHAPTER V: TYR[edit] The God of War[edit] Tyr Tiu, or Ziu was the son of Odin, and, according to different mythologists, his mother was Frigga, queen of the gods, or a beautiful giantess whose name is unknown, but who was a personification of the raging sea.

He is the god of martial honour, and one of the twelve principal deities of Asgard. Although he appears to have had no special dwelling there, he was always welcome to Vingolf or Valhalla, and occupied one of the twelve thrones in the great council hall of Glads-heim. "The hall Glads-heim, which is built of gold; Where are in circle, ranged twelve golden chairs, And in the midst one higher, Odin's Throne.

" Balder Dead (Matthew Arnold). Areas. You are here: These are the areas which are currently available in the Encyclopedia Mythica. 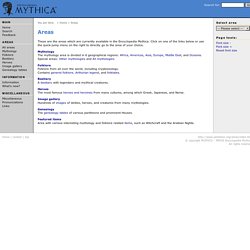 Click on one of the links below or use the quick-jump menu on the right to directly go to the area of your choice. Mythology The mythology area is divided in 6 geographical regions: Africa, Americas, Asia, Europe, Middle East, and Oceania. Special areas: Other mythologies and All mythologies. Folklore Folklore from all over the world, including cryptozoology. Bestiary A bestiary with legendary and mythical creatures. 10 Disturbing Episodes from Norse Mythology. Most people have some passing familiarity with Norse mythology and legend. Even the days of our modern week are named after its gods and goddesses. But there is a dark side to the Nordic mythos that few people are aware of. Some of the episodes described below reveal uncomfortable truths about the cosmos. Some exhibit the jaundiced eye with which the Norse viewed life and death. And some are just gross.

Runic translator. In his book 'The Hobbit' J.R.R. 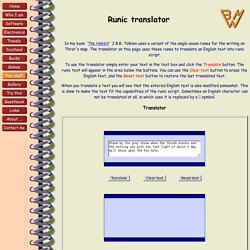 Tolkien uses a variant of the anglo-saxon runes for the writing on Thror's map. The translator on this page uses these runes to translate an English text into runic script. To use the translator simply enter your text in the text box and click the Translate button. The runic text will appear in the area below the buttons. You can use the Clear text button to erase the English text, and the Reset text button to restore the last translated text. When you translate a text you will see that the entered English text is also modified somewhat. 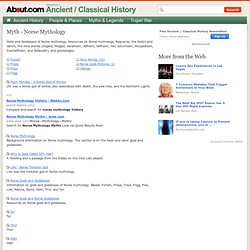 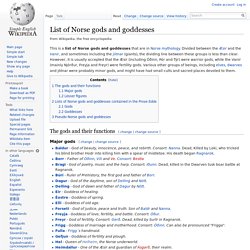 Divided between the Æsir and the Vanir, and sometimes including the jötnar (giants), the dividing line between these groups is less than clear. However, it is usually accepted that the Æsir (including Óðinn, Þór and Týr) were warrior gods, while the Vanir (mainly Njörður, Freyja and Freyr) were fertility gods. Various other groups of beings, including elves, dwarves and jötnar were probably minor gods, and might have had small cults and sacred places devoted to them. 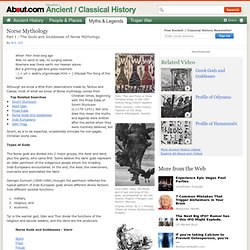 Nowhere was there earth nor heaven above. Bur a grinning gap and grass nowhere. - [ < url = asatru.org/voluspa.html > ] Völuspá-The Song of the Sybil Although we know a little from observations made by Tacitus and Caesar, most of what we know of Norse mythology comes from Christian times, beginning with the Prose Edda of Snorri Sturluson (c.1179-1241). Not only does this mean the myths and legends were written after the period when they were routinely believed, but Snorri, as is to be expected, occasionally intrudes his non-pagan, Christian world view. Norse Gods and Goddesses - About the Major Norse Gods and Goddesses in Norse Mythology. Gods of Asgard.

Dimension of Origin: Unrevealed, possibly AsgardHabitat: TemperateGravity: Earth-likeAtmosphere: Earth-likePopulation: 500-800 (estimated)Other Associated Dimensions: The Asgardian dimension is a cosmology of inter-connected worlds of which inhabit the other known races of the Asgardian gods. 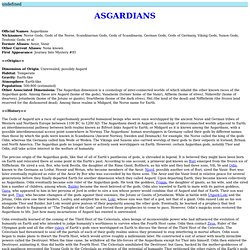