Dáinsleif. When Heðinn offers him compensation for the abduction of his daughter, Högni replies: 'Thou hast made this offer over-late, if thou wouldst make peace: for now I have drawn Dáinsleif, which the dwarves made, and which must cause a man's death every time it is bared,[1] nor ever fails in its stroke; moreover, the wound heals not if one be scratched with it.' —Skáldskaparmál (50), Brodeur's translation[2] 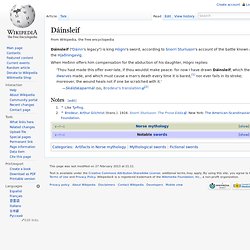 Gram (mythology) In Norse mythology, Gram (Old Norse "wrath")[1] is the name of the sword that Sigurd used to kill the dragon Fafnir.[2] Gram was forged by Volund and originally belonged to Sigurd's father, Sigmund, who received it in the hall of the Völsung after pulling it out of the tree Barnstokkr into which Odin had stuck it where no one else could pull it out. 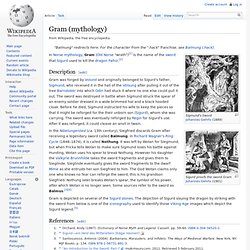 The sword was destroyed in battle when Sigmund struck the spear of an enemy soldier dressed in a wide brimmed hat and a black hooded cloak. Before he died, Sigmund instructed his wife to keep the pieces so that it might be reforged for the their unborn son (Sigurd), whom she was carrying. The sword was eventually reforged by Regin for Sigurd's use. After it was reforged, it could cleave an anvil in twain.

In the Nibelungenlied (ca. 13th century), Siegfried discards Gram after receiving a legendary sword called Balmung; in Richard Wagner's Ring Cycle (1848–1874), it is called Nothung. Gram is depicted on several of the Sigurd stones. Gungnir. In Norse mythology, Gungnir (Old Norse "swaying one"[1]) is the spear of the god Odin. 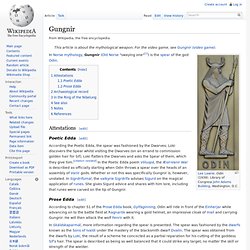 Attestations[edit] Poetic Edda[edit] According the Poetic Edda, the spear was fashioned by the Dwarves; Loki discovers the Spear whilst visiting the Dwarves (on an errand to commission golden hair for Sif). Loki flatters the Dwarves and asks the Spear of them, which they give him. [citation needed] In the Poetic Edda poem Völuspá, the Æsir-Vanir War is described as officially starting when Odin throws a spear over the heads of an assembly of Vanir gods. Prose Edda[edit] Archaeological record[edit] If the rider on horseback on the image on the Böksta Runestone has been correctly identified as Odin, then Odin is shown carrying Gungnir while hunting an elk.[2] Hrotti. Hrotti is a sword in the Völsung cycle (Fáfnismál, Völsunga saga, 20). 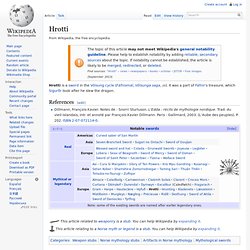 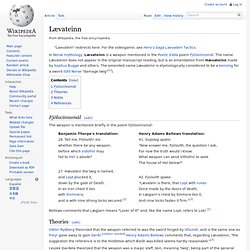 The name Lævateinn does not appear in the original manuscript reading, but is an emendation from Hævateinn made by Sophus Bugge and others. The amended name Lævateinn is etymologically considered to be a kenning for a sword (Old Norse "damage twig"[1]). Fjölsvinnsmál[edit] The weapon is mentioned briefly in the poem Fjölsvinnsmál: Bellows comments that Lægjarn means "Lover of Ill" and, like the name Lopt, refers to Loki.[3] Theories[edit] Leszek Gardeła theorized that the weapon was a magic staff, tein, meaning 'twig', being part of the general word for magic staff gambantein.[4]

Mjölnir. Name[edit] Mjölnir is usually interpreted as meaning "That which smashes", derived from the verb mölva "To smash" (cognate with English meal, mill); comparable derivations from the same root meaning "hammer" are Slavic molot and Latin malleus (whence English mallet). 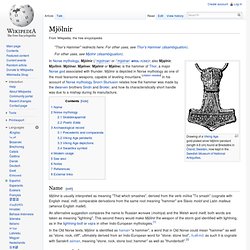 An alternative suggestion compares the name to Russian молния (molniya) and the Welsh word mellt, both words are taken as meaning "lightning". This second theory would make Mjölnir the weapon of the storm god identified with lightning, as in the lightning-bolt or vajra in other Indo-European mythologies.[1] In the Old Norse texts, Mjölnir is identified as hamarr "a hammer", a word that in Old Norse could mean "hammer" as well as "stone, rock, cliff", ultimately derived from an Indo-European word for "stone, stone tool", h₂éḱmō; as such it is cognate with Sanskrit aśman, meaning "stone, rock, stone tool; hammer" as well as "thunderbolt".[2] Norse mythology[edit] "The third gift—an enormous hammer" (1902) by Elmer Boyd Smith. 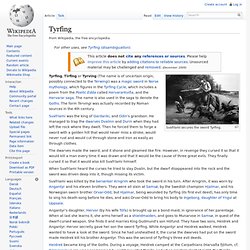 Tyrfing, Tirfing or Tyrving (The name is of uncertain origin, possibly connected to the Terwingi) was a magic sword in Norse mythology, which figures in the Tyrfing Cycle, which includes a poem from the Poetic Edda called Hervararkviða, and the Hervarar saga. The name is also used in the saga to denote the Goths. The form Tervingi was actually recorded by Roman sources in the 4th century. The dwarves made the sword, and it shone and gleamed like fire.

However, in revenge they cursed it so that it would kill a man every time it was drawn and that it would be the cause of three great evils.