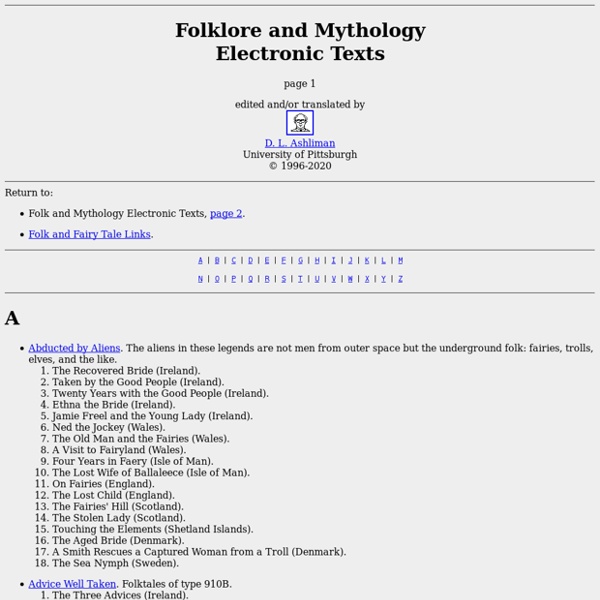 page 1 edited and/or translated by D. L. Ashliman University of Pittsburgh © 1996-2020 Return to: Abducted by Aliens. Bald Stories: Folktales about Hairless Men. Cain and Abel. Dancing in Thorns. East of the Sun and West of the Moon. Fairies' Hope for Christian Salvation.

Morrigan by Honor Johnson This article is about the Goddess Morrigan, whom archaeological evidence now tells us, dates back beyond the Copper age, and was the dominant Goddess of Europe called the Great Goddess. When I read the material about Morrigan, I suspected that there was more to her story, and that she was a transporter between life and death; a birth Goddess and a death Goddess in that she moved the soul through these cycles. Later writing seems to concentrate on her connection to death, but comes to view her, as warrior societies often do, in a way connected to their own needs (power, energy, enchantment and warfare). Some writing of course does not, she is seen as a healer, the protector of the land and the person who brings Arthur to power. I went through literary accounts of her to give a fuller picture of her, one that is I think more meaningful to many people, including myself.

FOR YOUR OWN GOOD - Alice Miller; Preface to the American Edition I remember sitting on my father's lap (OK, now my heart is pounding). I'm not sure how old I was but his hand was down my pants. I think I had just bathed and was wearing pyjamas, but I can't be sure. ..I kept squirming to try and get away, all the while trying to be subtle about it so he didn't realize that I was uncomfortable. I was so concerned with his feelings... Perhaps I was afraid of upsetting him. I guess I didn't know what to make of my feelings.

English folklore English folklore is the folk tradition which has developed in England over a number of centuries. Some stories can be traced back to their roots, while the origin of others is uncertain or disputed. England abounds with folklore, in all forms, from such obvious manifestations as the traditional Robin Hood tales, the Brythonic-inspired Arthurian legend, to contemporary urban legends and facets of cryptozoology such as the Beast of Bodmin Moor. Morris dance and related practices such as the Abbots Bromley Horn Dance preserve old English folk traditions, as do Mummers Plays. Pub names may preserve folk traditions. English folklore is largely drawn from Germanic, Celtic and Christian sources.

The Little Prince Antoine de Saint-Exupery Antoine de Saint-Exupéry Illustrated by author To Léon Werth I ask the indulgence of the children who may read this book for dedicating it to a grown-up. I have a serious reason: he is the best friend I have in the world. I have another reason: this grown-up understands everything, even books about children.

*Folktales, Fairy Tales, Tall Tales* AARON SHEPARD'S WORLD OF STORIES *Folk Tales, Myths, Legends, More* Here are folktales, fairy tales, tall tales, myths, legends, magical tales, and sacred stories, plus original fables, humor, and historical fiction—all from award-winning author Aaron Shepard. Most of the stories have been published in top children’s magazines like Cricket and Australia’s School Magazine, while some are from Aaron’s picture books and early readers. For email notice of new stories, subscribe to Aaron’s Update. Folktales Stories told through the centuries. Ballad of Reading Gaol by Oscar Wilde The Ballad of Reading Gaol by Oscar Wilde He did not wear his scarlet coat, For blood and wine are red, And blood and wine were on his hands When they found him with the dead, The poor dead woman whom he loved, And murdered in her bed. He walked amongst the Trial Men In a suit of shabby grey; A cricket cap was on his head, And his step seemed light and gay; But I never saw a man who looked So wistfully at the day. I never saw a man who looked With such a wistful eye Upon that little tent of blue Which prisoners call the sky, And at every drifting cloud that went With sails of silver by.

KS2 Literacy Different types of words can be used to make your writing more interesting and easier to read. You need to know when to use them and how to spot them. In writing, words are grouped together into phrases, sentences, clauses and paragraphs. Linking these building blocks together in the right way makes your writing easy to understand and interesting to read. Use your commenting skills to identify what's wrong with these pieces of writing. Basilikon Doron James I's Basilikon Doron Source: James I. Basilikon Doron or His Majesties Instrvctions To His Dearest Sonne, Henry the Prince. [Edinburgh 1599, 7 copies only; Edinburgh, London (2 edns) 1603; London, Hanoviae, 1604 (Latin); Paris 1603, 1604 (French), according to Introduction, p ciii].

Ten Ways to Cultivate a Love of Reading in Students As a teacher, I was obsessed with cultivating a love of reading in my students. I love to read, loved it as a kid too. I'm equally compelled to ensure that my own child loves reading -- and he does. I well aware that I'm on a mission -- but I also know it's a worthy one! Here are ten suggestions for how any teacher, teaching any subject can participate in this mission, and how parents and administrators can help. A.E. Housman - selected poems The following is a (fairly extensive) selection of Housman's poetry originally published by me, Martin Hardcastle, in the early 1990s. It has been superseded by the collected Housman page and that's probably where you want to be. To ask me a question or send me a comment, please read this. There are some questions I won't answer: don't waste your time asking them.