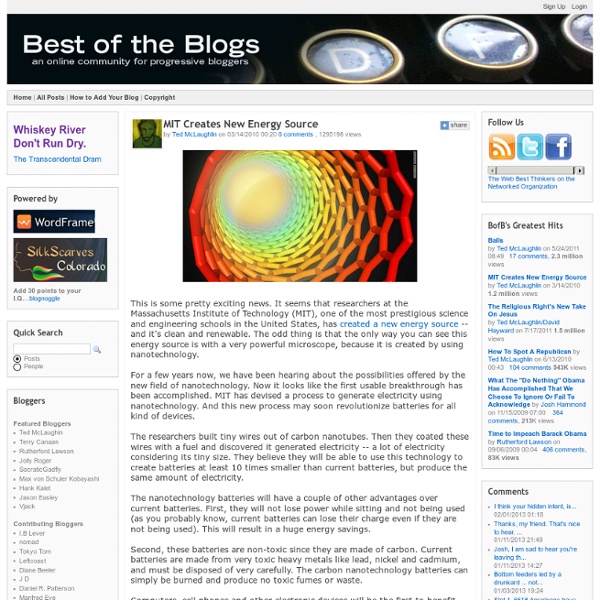 This is some pretty exciting news. It seems that researchers at the Massachusetts Institute of Technology (MIT), one of the most prestigious science and engineering schools in the United States, has created a new energy source -- and it's clean and renewable. The odd thing is that the only way you can see this energy source is with a very powerful microscope, because it is created by using nanotechnology. For a few years now, we have been hearing about the possibilities offered by the new field of nanotechnology. Now it looks like the first usable breakthrough has been accomplished. MIT has devised a process to generate electricity using nanotechnology. The researchers built tiny wires out of carbon nanotubes. The nanotechnology batteries will have a couple of other advantages over current batteries. Second, these batteries are non-toxic since they are made of carbon. Computers, cell phones and other electronic devices will be the first to benefit from the nanotechnology batteries.

Heads Up, Hoverboarders: Here Comes Quantum Levitation Few motifs of science fiction cinema have been more appealing to us than the subtle defiance of gravity offered by futuristic hovercraft. So every once in a while we check in to see how humanity is progressing on that front, and whether the promise of hoverboards will be delivered by 2015 as evidenced in Back to the Future Part 2. We’re not quite there yet, but we’re definitely getting off the ground, so to speak. Get ready to hover your brain around the art of quantum levitation. That’s right, quantum. Normally that word indicates that it’s difficult to explain what’s going on. IBM reveals five innovations that will change our lives in the next five years (Update) Today IBM formally unveiled the sixth annual “IBM 5 in 5" (#ibm5in5) – a list of innovations that have the potential to change the way people work, live and interact during the next five years. The next IBM 5 in 5 is based on market and societal trends as well as emerging technologies from IBM’s research labs around the world that can make these transformations possible. People power will come to life. Anything that moves or produces heat has the potential to create energy that can be captured. Walking.

One-Minute Physics archive Sandrine Ceurstemont, editor, New Scientist TV What's part of the universe? You may think of it as incorporating everything that exists - both on Earth and in space - but could it also include the unknown? In this One-Minute Physics episode, film-maker Henry Reich delves into the notion of the universe as described by physics, distinguishing between the whole universe and what's observable. He looks at the three components of the universe that we are sure of and whether mathematics could be included or not. 5 Ways To Hack Your Brain Into Awesomeness Much of the brain is still mysterious to modern science, possibly because modern science itself is using brains to analyze it. There are probably secrets the brain simply doesn't want us to know. But by no means should that stop us from tinkering around in there, using somewhat questionable and possibly dangerous techniques to make our brains do what we want. We can't vouch for any of these, either their effectiveness or safety. All we can say is that they sound awesome, since apparently you can make your brain... #5.

Antimatter belt around Earth discovered by Pamela craft 7 August 2011Last updated at 10:54 The antiprotons lie sandwiched between the inner and outer Van Allen belts (in red) around the Earth A thin band of antimatter particles called antiprotons enveloping the Earth has been spotted for the first time. The find, described in Astrophysical Journal Letters, confirms theoretical work that predicted the Earth's magnetic field could trap antimatter. 100 Best (Free) Science Documentaries Online No matter how much you know, there is always something new to learn about science. While your college courses may cover the basics, you can get a more in-depth look at a wide variety of topics from Internet resources such as these great documentaries. These selections will help you explore everything from the inner reaches of the human mind to the outer areas of our universe and just about everything else in between. Better yet, they’re all free to watch online so you can learn more without spending a dime.

Kabbalah and String Theory Ten Dimensions According to string theory, all of reality exists in (exactly) ten dimensions. There are four revealed dimensions (the three dimensions of space together with the fourth dimension of time) and an additional six concealed (spatial) dimensions. In Kabbalah we are taught that God emanated from His infinite light (through the process of tzimtzum–the “contraction” of infinity) ten Divine lights or powers (sefirot) through which He created the universe. Each of these ten powers can be understood to be a “dimension” of reality. This is the ultimate reason that the Torah chooses the “perfect” number system to be the decimal system (as is said in the Torah: “The tenth shall be holy for God”).

Do Bar Tricks From Wired How-To Wiki You've been buying your own booze at the local bar like a sucker ever since you turned 21. But with a stiff shot of science, you can hustle the tipsy into picking up your tab. Try this pub magic to score yourself some free rounds. — William Snyder This page is a wiki. Better lasers for optical communications Long-distance, high speed communications depend on lasers. But when information is transmitted down fiber optic cables, it's critical that the signal be clear enough to be decoded at the other end. Two factors are important in this respect: the color of the light, otherwise known as the wavelength, and the orientation of the light wave, known as polarization.

8 Things Everybody Ought to Know About Concentrating “Music helps me concentrate,” Mike said to me glancing briefly over his shoulder. Mike was in his room writing a paper for his U.S. History class. On his desk next to his computer sat crunched Red Bulls, empty Gatorade bottles, some extra pocket change and scattered pieces of paper. In the pocket of his sweat pants rested a blaring iPod with a chord that dangled near the floor, almost touching against his Adidas sandals.

Rainbow-trapping scientist now strives to slow light waves even further An electrical engineer at the University at Buffalo, who previously demonstrated experimentally the "rainbow trapping effect" -- a phenomenon that could boost optical data storage and communications -- is now working to capture all the colors of the rainbow. In a paper published March 29 in the Proceedings of the National Academy of Sciences, Qiaoqiang Gan (pronounced "Chow-Chung" and "Gone"), PhD, an assistant professor of electrical engineering at the University at Buffalo's School of Engineering and Applied Sciences, and his colleagues at Lehigh University, where he was a graduate student, described how they slowed broadband light waves using a type of material called nanoplasmonic structures. Gan explains that the ultimate goal is to achieve a breakthrough in optical communications called multiplexed, multiwavelength communications, where optical data can potentially be tamed at different wavelengths, thus greatly increasing processing and transmission capacity.

Cotton Fabric Cleans Itself When Exposed to Sunlight By David SkoumbourdisEpoch Times Staff Created: December 21, 2011 Last Updated: June 26, 2012 A newly-developed fabric coated with nanoparticles can clean itself when exposed to sunlight. (Photos.com) Clothing that cleans and de-odorizes itself will be a reality thanks to the development of a cotton fabric that removes stains and kills bacteria when exposed to ordinary sunlight. The self-cleaning properties of the fabric are due to a special coating of nanoparticles made from a compound of titanium dioxide and nitrogen. Search for dark matter moves one step closer to detecting elusive particle Dark matter, the mysterious substance that may account for nearly 25 percent of the universe, has so far evaded direct observation. But researchers from UCLA, Columbia University and other institutions participating in the international XENON collaboration say they are now closer than ever before. Their new results, announced April 14 at the Gran Sasso National Laboratory in Italy, where the XENON experiment is housed deep beneath a mountain 70 miles west of Rome, represent the highest-sensitivity search for dark matter yet, with background noise 100 times lower than competing efforts. Dark matter is widely thought to be a kind of massive elementary particle that interacts weakly with ordinary matter. Physicists refer to these particles as WIMPS, for weakly interacting massive particles.

7 Basic Things You Won't Believe You're All Doing Wrong If you're like us, you might sometimes have a problem with complex tasks, like trying to drive an ambulance and send a text message at the same time. But hey, at least most of us have figured out the simplest things that get us through the day, right? Except, you know, some of the simple things we've done every day of our lives, like ... What could be simpler than taking a good crap? Even babies are good at it.