The Spooky World Of Quantum Biology 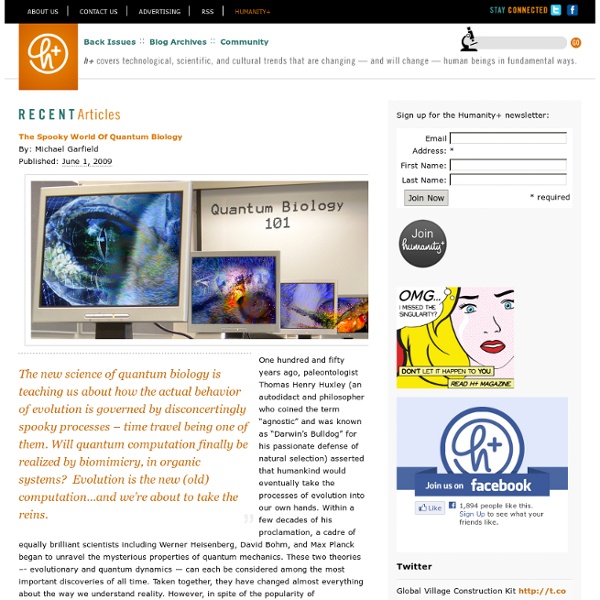 Michael Garfield The new science of quantum biology is teaching us about how the actual behavior of evolution is governed by disconcertingly spooky processes – time travel being one of them. Will quantum computation finally be realized by biomimicry, in organic systems? One hundred and fifty years ago, paleontologist Thomas Henry Huxley (an autodidact and philosopher who coined the term “agnostic” and was known as “Darwin’s Bulldog” for his passionate defense of natural selection) asserted that humankind would eventually take the processes of evolution into our own hands. The premise is simple. Quantum computation, a science still in its infancy, promises swiftness and efficiency vastly superior to anything possible with conventional silicon chips. It’s a promising avenue for people with big plans for strong AI or virtual reality. This is one of the reasons that many scientists have considered quantum biology both unlikely and unscientific. What does this all mean? Related:  Quantum Playground

TESLA Series Technologies | Synergistic Research The all new TESLA Series cables combine three revolutionary technologies based on the work of Nikola Tesla – the Tesla Tricon cable geometry, Zero Capacitance Active Shielding, and a proprietary Patent Pending conditioning process in a new line of cables that are smaller and more flexible than our previous models with significantly higher performance and value. TESLA Cables allow you to hear deeper into recordings with detail that’s transparent and non-fatiguing. In fact starting at the Accelerator interconnect and speaker cable level, TESLA Cables outperform every cable we have ever pitted them against regardless of price. These extraordinary cables represent a new benchmark by which all other cables can be measured and they do this with seemingly opposite strengths. Quantum Tunneling High Voltage Conditioning Quantum Tunneling

Scientists stop the ageing process (ABC News in Science) Clean bill of health: Scientists have shown that clearing damaged protein from the liver helps stop age decline in the organ (Source: iStockphoto) Scientists have stopped the ageing process in an entire organ for the first time, a study released today says. Published in today’s online edition of Nature Medicine, researchers at the Albert Einstein College of Medicine at Yeshiva University in New York City also say the older organs function as well as they did when the host animal was younger. The researchers, led by Associate Professor Ana Maria Cuervo, blocked the ageing process in mice livers by stopping the build-up of harmful proteins inside the organ’s cells. As people age their cells become less efficient at getting rid of damaged protein resulting in a build-up of toxic material that is especially pronounced in Alzheimer’s, Parkinson’s and other neurodegenerative disorders. By contrast, the livers of normal mice in a control group began to fail. Read on… Like this: Like Loading...

Gravitational-wave finding causes 'spring cleaning' in physics Detlev van Ravenswaay/Science Photo Library Artist's rendering of 'bubble universes' within a greater multiverse — an idea that some experts say was bolstered with this week's discovery of gravitational waves. On 17 March, astronomer John Kovac of the Harvard-Smithsonian Center for Astrophysics presented long-awaited evidence of gravitational waves — ripples in the fabric of space — that originated from the Big Bang during a period of dramatic expansion known as inflation. By the time the Sun set that day in Cambridge, Massachusetts, the first paper detailing some of the discovery’s consequences had already been posted online1, by cosmologist David Marsh of the Perimeter Institute for Theoretical Physics in Waterloo, Canada, and his colleagues. Cosmologist Marc Kamionkowski of Johns Hopkins University in Baltimore, Maryland, agrees that some axion models no longer work, “because they require inflation to operate at a lower energy scale than the one indicated by BICEP2”. Linde agrees.

National Center for Biotechnology Information Does DNA Emit Light? Dan Eden for viewzone.com An incredible story! I get lots of suggestions for stories, and I really appreciate them. But some of them are too good to be true. I had this same experience this week when I was sent an article where a Russian (again) scientist, Pjotr Garjajev, had managed to intercept communication from a DNA molecule in the form of ultraviolet photons -- light! But this was just the beginning. Dr. I tried to find a scientific journal that had this experiment. Fritz-Albert Popp thought he had discovered a cure for cancer. It was 1970, and Popp, a theoretical biophysicist at the University of Marburg in Germany, had been teaching radiology -- the interaction of electromagnetic (EM) radiation on biological systems. He'd been examining two almost identical molecules: benzo[a]pyrene, a polycyclic hydrocarbon known to be one of the most lethal carcinogens to humans, and its twin (save for a tiny alteration in its molecular makeup), benzo[e]pyrene. Why Ultra-violet light? Photorepair

Quantum Biology and the Puzzle of Coherence One of the more exciting discoveries in biology in the last few years is the role that quantum effects seem to play in many living systems. The two most famous examples are in bird navigation, where the quantum zeno effect seems to help determine the direction of the Earth’s magnetic field, and in photosynthesis, where the way energy passes across giant protein matrices seems to depend on long-lasting quantum coherence. Despite the growing evidence in these cases, many physicists are uneasy, however. The problem is the issue of decoherence, how quickly quantum states can survive before they are overwhelmed by the hot, wet environment inside living things. According to conventional quantum calculations, these states should decay in the blink of an eye, so fast that they should not be able to play any role in biology. That’s led many physicists to assume something is wrong: either the measurements are faulty in some way or there is some undiscovered mechanism that prevents decoherence.

Fossil suggests new hominid species: Stone Age cavemen 'Red deer people' discovered in China 'Red deer people' lived 14,500-11,500 years ago in AsiaPreviously thought that homo sapiens had continent to themselves'Highly unusual' mixture of ancient and modern - could be new speciesCould also be relic of early migration out of Africa which died out By Rob Waugh Published: 15:00 GMT, 14 March 2012 | Updated: 09:27 GMT, 16 March 2012 Four Stone Age people found in caves in China could be a entirely new species of humanoid - and the discovery 'opens a new chapter' in the history of evolution, say archaeologists. The fossils, found in two caves, belong to a previously unknown Stone Age people and have a 'highly unusual' mixture of ancient and modern features. Named the 'Red Deer people' because of the animals they hunted and dating from between 14,500 to 11,500 years ago, they are the youngest humanoid fossils to be found in Asia. Previously it had been thought that early humans had little competition in the continent. But the new find suggests this may not have been the case.

Quantum weirdness is everywhere in the living world The point of the most famous thought-experiment in quantum physics is that the quantum world is different from our familiar one. Imagine, suggested the Austrian physicist Erwin Schrödinger, that we seal a cat inside a box. The cat’s fate is linked to the quantum world through a poison that will be released only if a single radioactive atom decays. Quantum mechanics says that the atom must exist in a peculiar state called ‘superposition’ until it is observed, a state in which it has both decayed and not decayed. Furthermore, because the cat’s survival depends on what the atom does, it would appear that the cat must also exist as a superposition of a live and a dead cat until somebody opens the box and observes it. After all, the cat’s life depends on the state of the atom, and the state of the atom has not yet been decided. Yet nobody really believes that a cat can be simultaneously dead and alive. Quantum mechanics insists that all particles are also waves. Was he right? Take enzymes.

Scientists discover virus that kills all grades of breast cancer ‘within seven days’ By Stephen C. WebsterFriday, September 23, 2011 16:48 EDT Scientists at the Penn State College of Medicine said this week they have discovered a virus that is capable of killing all grades of breast cancer “within seven days” of first introduction in a laboratory setting. The virus, known as adeno-associated virus type 2 (AAV2), is naturally occurring and carried by up to 80 percent of humans, but it does not cause any disease. Researchers learned of its cancer-killing properties in 2005, after Penn State scientists observed it killing cervical cancer cells. When combined in a lab recently, AAV2 eradicated all the breast cancer cells “within seven days,” according to researchers. “If we can determine which viral genes are being used, we may be able to introduce those genes into a [therapy],” explained Penn State research associate Samina Alam. The Center for Disease Control says that breast cancer is the most common type of cancer affecting American women. Copyright 2011 The Raw Story

Scientists Achieve Quantum Teleportation One of the hurdles to teleportation has been overcome, with the reliable movement of quantum information between two objects separated by a short distance. The achievement is still a very, very long way from the movements familiar from science fiction, but strengthens our confidence in the theory of quantum entanglement, one of the most controversial aspects of modern physics. It may, moreover, assist the much closer goal of quantum computing. Certain subatomic particles always exist in paired states. For example, two electrons may have opposite spins. However, the distance between the two this means that the information of what has happened to the one particle must be transmitted infinitely fast – faster than the speed of light. In 1964 physicist John Stewart Bell came up with an idea for an experiment to test whether entanglement is real. The Delft team trapped electrons in very low temperature diamonds, which team leader Ronald Hanson describes as “miniprisons”.

How Evolution Happens A Lazy Layman's Guide to Quantum Physics That's an easy one: it's the science of things so small that the quantum nature of reality has an effect. Quantum means 'discrete amount' or 'portion'. Max Planck discovered in 1900 that you couldn't get smaller than a certain minimum amount of anything. The meaning of quantum physics is a bit of a taboo subject, but everyone thinks about it. Copenhagen Interpretation (CI) This is the granddaddy of interpretations, championed by the formidable Niels Bohr of Copenhagen university. The CI has a bit of a cheek calling itself an interpretation, because it essentially says "thou shalt not ask what happens before ye look". When you do try to take Copenhagen seriously you come to the conclusion that consciousness and particle physics are inter-related, and you rush off to write a book called The Dancing Wu-Li Masters. More recently, Henry Stapp at the University of California has written papers such as On Quantum Theories of the Mind (1997). What happens to the cat? What happens to the cat?