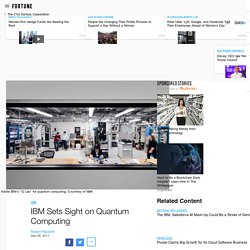 Unlike traditional computers, quantum ones are designed to harness the wonkier properties of physics to perform far more complex operations. Whereas a conventional computer stores information as "bits" in two states—1 equaling "on" or 0 as "off"—a quantum computer uses "qubits" to hold multiple states at the same time, thus unleashing the weird "superposition" property of quantum mechanical particles for exponential power. Since IBM (ibm, -0.57%) opened up access to its own fledgling quantum computing system to the public in May, approximately 40,000 people have run more than 275,000 experiments on it to date, the company said Monday.

The system today consists of a 5-qubit processor that anyone can play with via the Internet. Quantum Cryptography Passes Another Critical Test. On a clear night last September, at a little Ontario airport, two pilots, two scientists, and an engineer took off in a small plane. 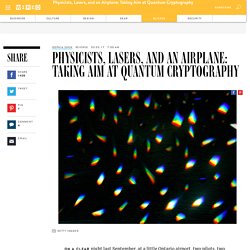 They’d pulled the left-side door off its hinges, and a telescope poked out of the portal—not at the night sky, but at the ground below. The team was about to play a very difficult, very windy game of catch. A couple miles away, their colleagues gathered in a trailer to lob the tiny baseballs: infrared photons, beamed from a laser that tracked the plane along its mile-high trajectory. In the craft cruising above, physics graduate student Chris Pugh and the others pivoted their telescope to catch the photons, one by one. On their best run, they caught over 800,000 photons in just a few minutes, but it wasn’t easy. National Quantum Technologies Showcase. Naked Scientists Podcast Player. Has The Age Of Quantum Computing Arrived? - Disruption.

Q&A - Catching Gravitational Waves - with Sheila Rowan. Sorry, Einstein. Quantum Study Suggests ‘Spooky Action’ Is Real. Photo In a landmark study, scientists at the Delft University of Technology in the Netherlands reported they have conducted an experiment they say proves one of the most fundamental claims of quantum theory — that objects separated by great distance can instantaneously affect each other’s behavior. 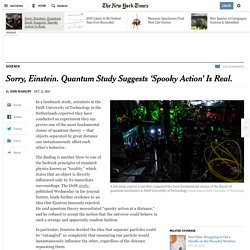 The finding is another blow to one of the bedrock principles of standard physics known as “locality,” which states that an object is directly influenced only by its immediate surroundings. The Delft study, published Wednesday in the journal Nature, lends further credence to an idea that Einstein famously rejected. Quantum Computers One Step Closer After Australian Breakthrough.

Google's Quantum Computer Just Got a Big Upgrade. Consciousness & quantum physics ~ Reality is an illusion. University of Glasgow’s Professor Douglas Paul among leading researchers to share £12 million investment from EPSRC. GLASGOW, 29-9-2015 — /EuropaWire/ — The University of Glasgow’s Professor Douglas Paul has been announced as one of a series of leading researchers who will share in a £12 million investment from the Engineering and Physical Sciences Research Council (EPSRC). 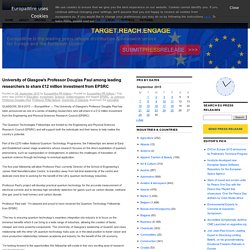 The Quantum Technologies Fellowships are funded by the Engineering and Physical Sciences Research Council (EPSRC) and will support both the individuals and their teams to help realise the country’s potential. Part of the £270 million National Quantum Technology Programme, the Fellowships are aimed at Early and Established career stage academics whose research focuses on the direct exploitation of quantum phenomena, such as superposition or entanglement, to address the challenges of translation of quantum science through technology to eventual application. Professor Paul said: “I’m pleased and proud to have received the Quantum Technology Fellowship from EPSRC. Media enquiries: ross.barker@glasgow.ac.uk / 0141 330 8593.

New quantum dot could make quantum communications possible. A new form of quantum dot has been developed by an international team of researchers that can produce identical photons at will, paving the way for multiple revolutionary new uses for light. 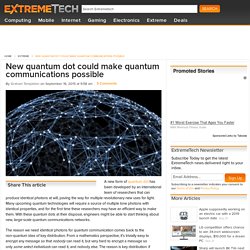 Many upcoming quantum technologies will require a source of multiple lone photons with identical properties, and for the first time these researchers may have an efficient way to make them. With these quantum dots at their disposal, engineers might be able to start thinking about new, large-scale quantum communications networks.

The reason we need identical photons for quantum communication comes back to the non-quantum idea of key distribution. From a mathematics perspective, it’s trivially easy to encrypt any message so that nobody can read it, but very hard to encrypt a message so only some select individuals can read it, and nobody else. The reason is key distribution: if everybody who needs to decrypt a message has the associated key needed for decryption, then no problem. An international blog series from ATLAS. More than 3000 scientists from all over the world, including about 1000 graduate students, collaborate on the ATLAS experiment – an all-purpose detector on the Large Hadron Collider (LHC). 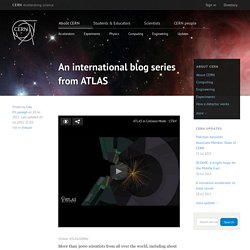 QUANTUM PHYSICS 2. A quick look at accelerators. The LHC: a unique tool The Large Hadron Collider (LHC) is a particle accelerator based at CERN, the European Organization for Nuclear Research, the world's largest particle physics laboratory. 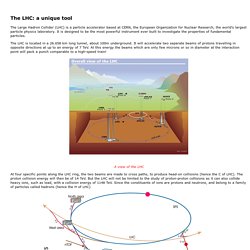 It is designed to be the most powerful instrument ever built to investigate the properties of fundamental particles. The LHC is located in a 26.658 km long tunnel, about 100m underground. It will accelerate two separate beams of protons travelling in opposite directions at up to an energy of 7 TeV. What is a Quantum Computer and How Does it work. QUANTUM PHYSICS 2.